During the 2022 British Softball Federation AGM, held as a remote meeting on the afternoon of Saturday 26 February, seven BSF Annual Awards were

announced, based mainly on the 2021 season, along with the names of 11 new members of the BSF Hall of Fame.

In addition, mention was given to people from the softball community who had won coaching awards at this year’s BaseballSoftballUK Coach Summit, and to the two British players and one British umpire voted into the Softball Europe Hall of Fame at the recent WBSC Europe Congress.

Trophies will be presented to Annual Award winners and BSF Hall of Fame inductees at selected tournaments during the summer.

The BSF gives out a series of awards each year, mainly related to the previous season, for outstanding achievement across a range of categories.  The awards announced at the AGM were as follows:

The Glover Cup for outstanding long-term service to softball by an administrator or organiser was won by Ian Tomlin.

Ian has been the key figure over the past decade in developing men’s fastpitch in the UK, particularly through his work with young players who have gone on to selection for the GB Under-18 and Under-23 Men’s Teams as well as the Senior Men’s Team.  Ian has been the Head Coach for both the Under-18s and Under-23s, has managed the former GB Under-19 Men’s Team at European Championships and the Meteors at the European Men’s Super Cup and has taken numerous teams of young fastpitch players to invitational tournaments across Europe.  Men’s fastpitch has been growing in quantity and quality in this country over recent years, and much of that is due to Ian’s dedication and hard work.

The President’s Club Award for outstanding performance or development work by an affiliated club or team was given to The Mix from the Great Britain Fastpitch League Women’s Division.

Not only did The Mix, led by Chelsie Robison and Sian Wigington, run away with the Women’s Division in the Great Britain Fastpitch League last year, they were the only British national or club team to compete in Europe last season, overcoming pandemic restrictions to play in the European Women’s Cup in Bulgaria, where they finished fifth.  In 2019, the last year before the pandemic, The Mix had won a silver medal at this same competition.

The League Glover Cup for outstanding development achievement by an affiliated league was won by the Great Britain Fastpitch League.

Coming off a lost season in 2020 due to the pandemic, the Great Britain Fastpitch League, organised and run by David Morris, came back more strongly than ever in 2021, growing to five teams each in the Women’s and Men’s Divisions.  The Men’s Division in particular saw the highest standard of play for many years, and the league hopes to grow even further in 2022.

The Umpire of the Year Award was given to Chris Lunn.

Chris won this award, not just for his consistent and reliable umpiring in the Bristol Softball League and at national tournaments last year, but for his massive contribution in creating outstanding graphics and animation for BASU’s new online umpire qualification course.

The Tournament of the Year Award was won by the BSUK Slowpitch Cup.

Making its debut in 2021, the BSUK Slowpitch Cup, with its fast-paced “Fully Loaded” rules, brought something new, different and fun to the softball calendar.  In 2022, the tournament is expanding to separate Rec and Comp weekends.

The Youth Team of the Year Award for outstanding performance or development achievement by a youth team was given to Archway Thunder.

School teams have participated in adult softball leagues before in this country, particularly in Bristol, but in 2021, the Archway Thunder from Archway Comprehensive School in nearby Stroud, Gloucestershire, won the First Division title in the Bristol Softball Association, edging out the Bristol Jets who went on to win the Platinum title at the League Nationals.  And just for good measure, the school’s second team, Archway Lightning, almost won Division 3 in Bristol: they finished second on the basis of one more run conceded over the season.

The Betsy Holden Award for outstanding achievement by a young person in playing, developing or promoting the sport, was won by Megan Rollins.

Megan has been with the GB Under-13 Cubs since 2018 and has worked hard at the Softball Academy, Under-13 training sessions and through training at home to make herself a better player.  Working on her pitching but also at different positions on the field, Megan has shown grit and determination throughout her time with the Cubs and has been continually selected for the GB Under-13s and, more recently, the Under-15s.  As an older member of the Under-13 squad, she has spent time helping younger players at training and at a mini-tournament held at Farnham Park last August.  Megan's hard work and dedication has earned her this award.

Eleven outstanding individuals have been voted into the BSF Hall of Fame this year following nominations from the softball community and decisions on these nominations by a BSF panel.

Due in part to the Covid pandemic, this is the first group to be inducted into the Hall of Fame since 2018, but the BSF will now have inductions every other year.

Hall of Fame members can be inducted in one or more of a number of categories.  The common denominator is that the men and women elected have played a major role in the growth and development of, or demonstrated outstanding achievement and ability within, British Softball.

DAN SPINKS.  Dan is probably the best slowpitch pitcher of his generation.  His success is based variety of delivery, great control and his ability to analyse batters’ weaknesses, and he is undoubtedly the best fielding pitcher British softball has seen.  He is also a strong and consistent hitter with home run power to all fields.  Dan has led the Pioneers (so far) to five National Championship titles and one European Slowpitch Super Cup gold medal and has helped the GB Co-ed Slowpitch Team win numerous European titles. 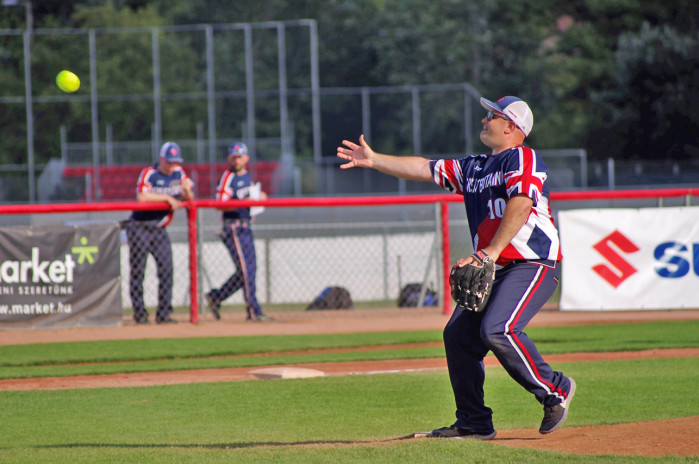 STEVE HAZARD.  Steve is almost certainly the best male slowpitch player Britain has ever produced, a superbly athletic shortstop and a very high-average hitter with huge home run power.  Steve has been a key player on a number of National Championship-winning teams and has helped the GB Co-ed Slowpitch Team win numerous European titles. 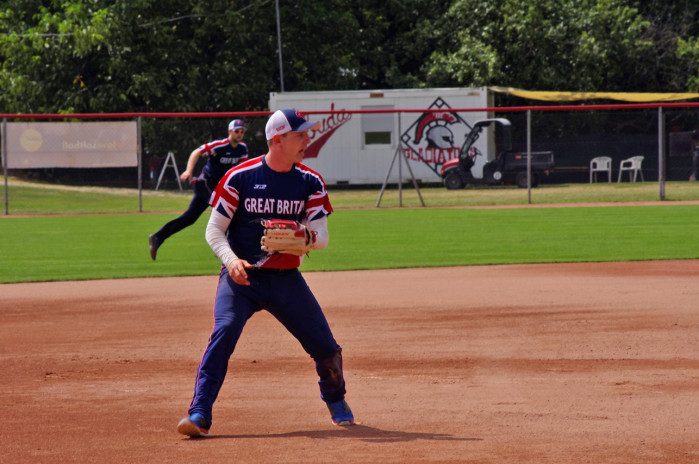 ROGER GROOMS.  Roger is one of the most intelligent and effective slowpitch pitchers in the country as well as an athletic and innovative fielder at the pitching position and a high-average hitter through his excellent bat control and speed.  He has led his club team, H2O, to a European Slowpitch Super Cup title and to numerous high finishes at National Championships. 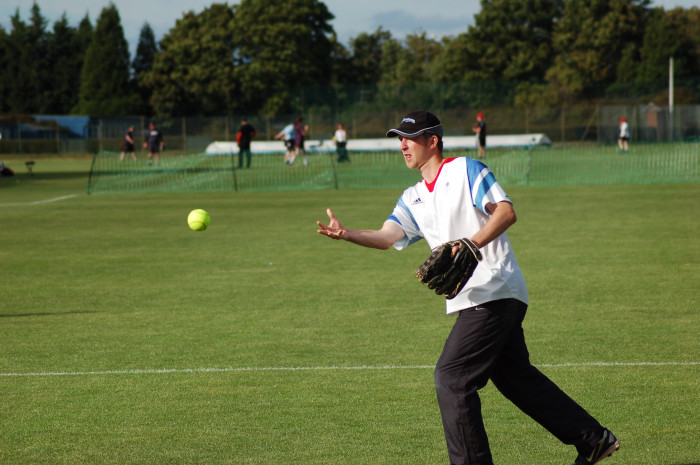 AMY MOORE  Amy was a committed GB Women’s Team player from 2012 through the Olympic Qualifier which the team narrowly lost in 2019.  She played for the GB Women in four World Championships and four European Championships, sometimes playing through injury and pain to help the team.  A fearless and effective catcher and an elite hitter against top-class pitching, Amy has been an astute student of the game, always looking for ways to give her team an edge. 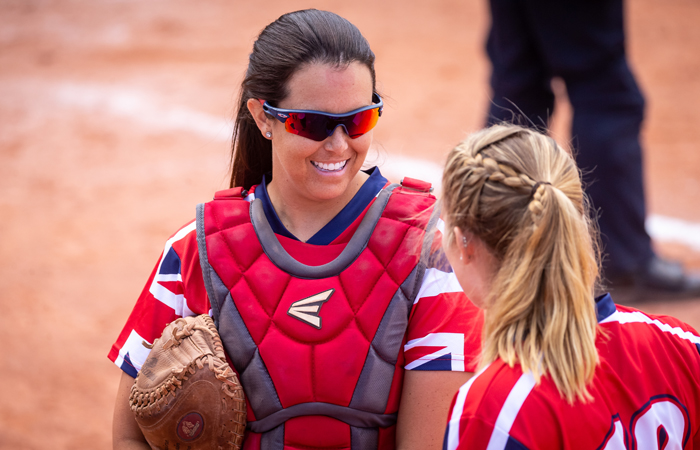 DAVID LEE.  David has been a GB Slowpitch player over two decades, helping GB win five Co-ed Slowpitch European titles, one Men’s Slowpitch Europeans and an ISF World Cup, and has been an effective pitcher and one of the top home run hitters in British softball over that time, winning multiple National Championships with the Chromies.  David was Head Coach for the Bristol Softball Association for 15+ years, running weekly training sessions and pitching and coaching courses, including at the BSUK Slowpitch Academy, and is currently the Assistant Coach for the GB Co-ed and Men’s Slowpitch Teams. 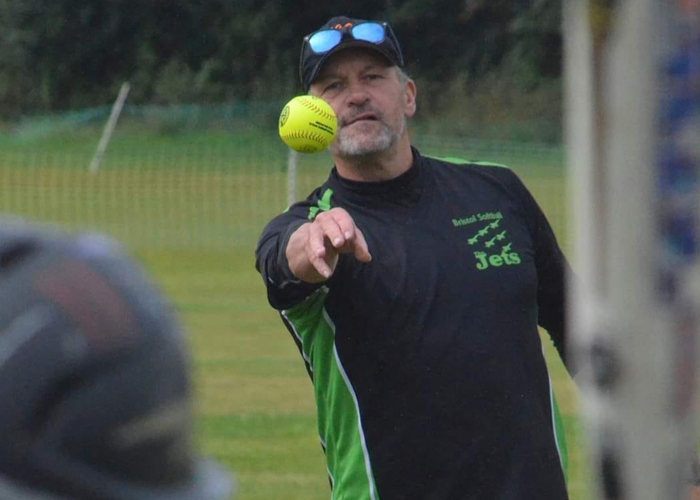 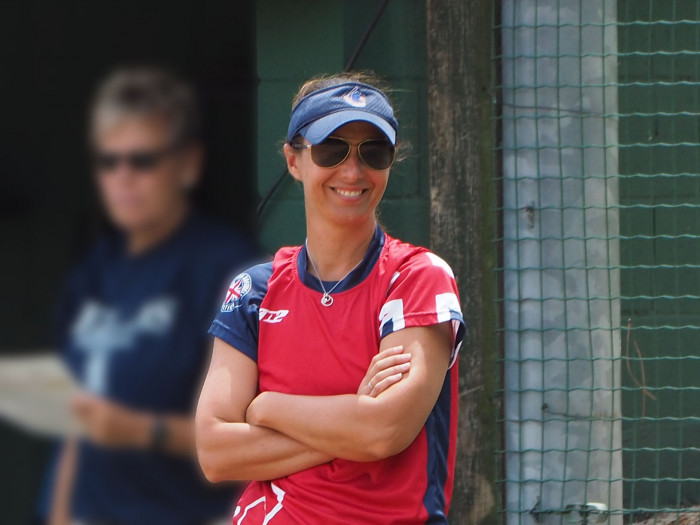 JIM and KAREN MURRAY.  Jim and Karen have started and run both adult softball and youth baseball teams in Glasgow over 20 years of playing and coaching.  Both hold softball and baseball coaching certification and together have coached over 250 adults and too many children to count!  As a primary school teacher, Karen has delivered softball coaching to pupils in every school she has worked in.  Their philosophy has always been to make softball accessible to everyone, with players recruited from all around the central belt of Scotland and from all walks of life.  Their impact on softball in Scotland over many years has been immense. 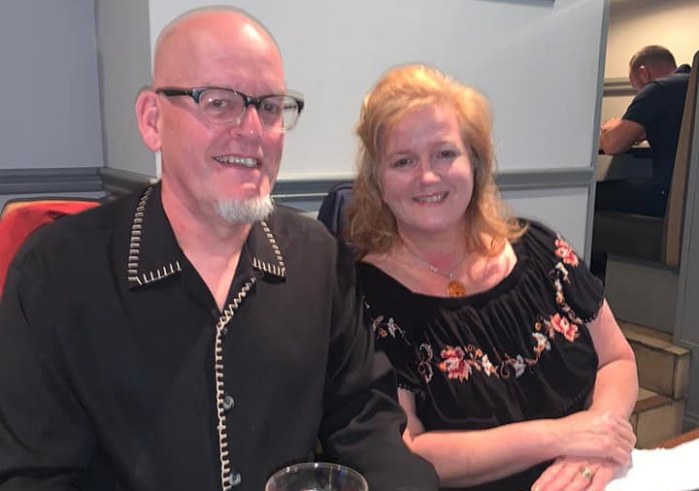 CHRIS MOON.  Chris began umpiring for BASU in 2005, gained his WBSC Europe (ESF) qualification in 2010 and in 2016 became a European Umpire-in-Chief.  He also became a WBSC (ISF) Umpire in 2013 and officiated in two ISF Slowpitch World Cups in Plant City, Florida.  Chris was the BASU Training Officer from 2012-2020, organising and leading umpire training courses around the country, and served as Technical Officer on the BSF Executive from 2011-2020. 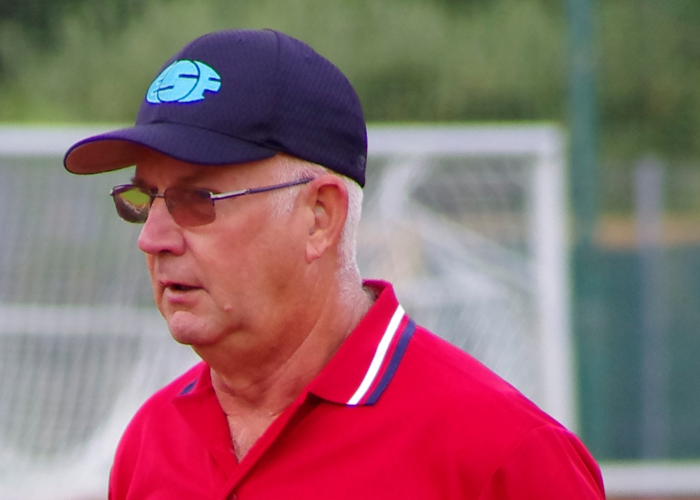 JULIE SPITTLE.  Julie has been the Team Operations Manager for the GB Under-13 Cubs since 2014, has run youth sessions with Thames Valley Softball Club since 2016 and has helped to deliver at BSUK-run youth sessions since 2018 as well as running numerous softball sessions at local schools and Brownie units.  Julie’s tireless dedication to softball development and especially youth development has few parallels within our sport. 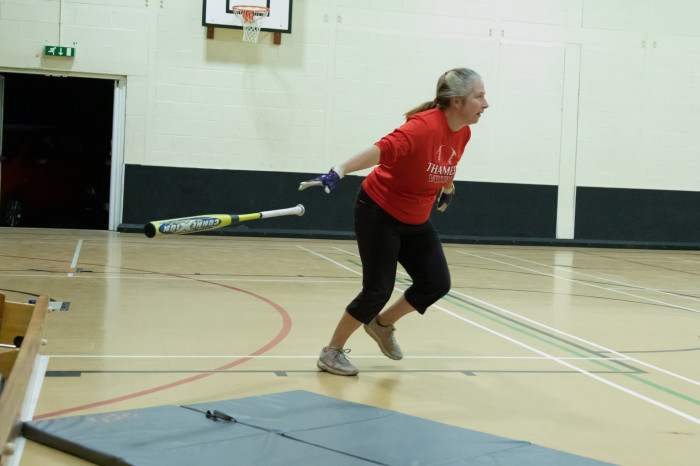 JENNY FROMER.  Jenny was the long-time backbone of the London Softball Federation (which began as the sport’s national governing body) for over 15 years as General Officer, then as President.  She was a GLSML (now LSL) Committee member for a number of years, including as Tournaments Officer, and helped the league with restructuring in 2015.  Jenny was the Joint CEO of BSUK from 2004-2017 and organised and ran the BSUK Tournament in 2015 that gained the Tournament of the Year award.  After leaving BSUK, she served as BSF President from 2017-2021, earning a great deal of approval from the community for the way she approached the job.  She began running her club team, SPAM, in 1991, and is still doing so 30 years later! 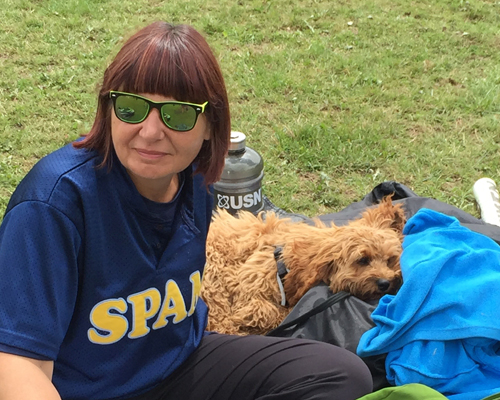 Softball and baseball coaching and volunteer awards for achievements in 2021 were announced by BSUK in conjunction with their annual Coach Summit, which was held remotely at the end of January and the beginning of February.  The awards presented to people from the softball community are listed below.

Full details and the achievements behind the awards can be found in the BSF AGM Pack.

The Softball Youth Coach of the Year Award is given to honour an outstanding contribution to coaching young people in softball.  The winner for 2021 was Holly Ireland from the RBI Wales organisation.  Other nominees were Julie Spittle from the GB Under-13 Cubs and Natalie Fox from Lytham St Anne’s Softball Club.

The Softball Adult Coach of the Year Award is given to an outstanding contributor to adult softball coaching in Great Britain.  The winner  for 2021 was Trevor Sykes from Coventry Blitz Softball Club.  Other nominees were Leanne Plummer from Leicester Royals and Adam Bee from MK Dons Softball.

The award for Services to Coaching, for the individual who best personifies what it means to be a baseball or softball coach over a long period of time, was won by Ian Tomlin, Head Coach of the GB Under-18 and Under-23 Men’s Fastpitch Teams and the architect of the current GB Youth Fastpitch programme.  Other nominees for this award were Holly Ireland from RBI Wales and Chris Ward from Guildford Mavericks Baseball Club.

Three members of the British softball community were voted into the Softball Europe Hall of Fame during the WBSC Europe Congress held in Ljubljana, Slovenia from 11-13 February.

Brett Gibbens and Steph Jardine were inducted as Players and become the first slowpitch players to gain membership to the European Hall of Fame.

Chris Moon was inducted as an Umpire.

Full details of these awards are in this article on the BSF website.