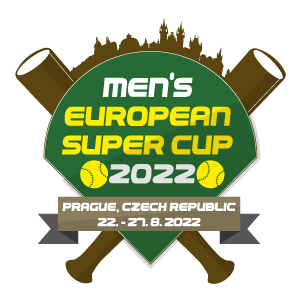 Prague, Czech Republic: 24 August – Heavy rain caused chaos at the European Men’s Super Cup on Tuesday, but the organisers completed all first-round games by Wednesday evening, as scheduled.  For the British entry, the Stags, that included three losses.

Stags captain Trent Nash had said before the tournament that he wasn’t sure exactly what to expect as his team, winners of the Great Britain Fastpitch League Men’s Division last year and leaders this year, took their first foray into European competition.  And that competition doesn’t come much tougher than the Men’s Super Cup, which is the only men’s fastpitch competition run by Softball Europe and thus attracts the best club teams Europe can muster.

Not only that, but many teams take the opportunity to add top guest players for the event.

What’s more, the Stags found themselves in a particularly tough first round group, with two teams from the Czech Republic, the dominant European country in men’s fastpitch, plus a team from the Netherlands that appears to be loaded with Czech players.

Given all that, the Stags have not done badly in losing to the host club Joudrs Prague by 6-0 on Tuesday evening in one of just four games played that day after sodden fields dried out, and then falling 16-6 to the Dutch team Vennep Flyers and 12-0 to the other Czech team, the Chomutov Beavers, on Wednesday.

The tournament now splits in two, with the top two teams from each first-round group playing for medals in an eight-team Super Cup bracket and the bottom teams from the first-round groups playing their own competition, the nine-team Softball Europe Cup.  Both competitions will be played with a double-elimination format.

This game was a well-played pitchers’ duel for the first four innings, with absolutely nothing to choose between the teams.

Guest player Kristof van Aarsen was in the circle for the Stags, faced by Jiri Pokorny for Joudrs Prague, and over those first four innings both pitchers gave up just two hits.  The Czechs had a single by Jannis El Amin in the top of the first inning and a ground rule double by Jan Svaton in the top of the third inning, while the Stags had a single by Amit Aswani in the bottom of the third inning and a double by van Aarsen himself in the bottom of the fourth.

But none of these hits led to a run, and after four innings were completed, Kristof van Aarsen had struck out three Czechs but, tellingly, Jiri Polorny had struck out nine Stags.

It was the Czechs who made the breakthrough in the top of the fifth inning, scoring four runs, all of them unearned.  Joudrs Prague had two on and two out when a fly ball to left field hit by Vincent Karger might have ended the inning.  But two runs scored when the catch wasn’t made and another two scored on an infield error a few minutes later, and the Stags had a bit of a mountain to climb.

Guest player Seth Ross entered the game in relief for the Stags in the top of the sixth inning and gave up a hit and a walk but struck out two to keep Joudrs Prague from adding to the score.

However, Jiri Pokorny racked up six more strikeouts in setting the Stags down in order in the bottom of the fifth and sixth innings.

The Czechs added a couple of insurance runs in the top of the seventh on two walks, a wild pitch, a stolen base and a two-RBI base hit by Jannis El Amin.

Jonas Mach took over the pitching for Joudrs Prague in the bottom of the seventh inning and retired the Stags in order.

The Stags had played a tough game against a very good team, and Stags’ pitching had limited the Czechs to just six hits.  But Joudrs Prague had even tougher pitching, and 18 strikeouts out of 21 outs tells its own story.

This was another game, played at 1.30 pm Czech time on Wednesday, in which the Stags hung tough against a strong team.

This time, the Stags found their bats: they scored six runs and had 10 hits to their opponents’ 14, while committing fewer errors.

But the Vennep Flyers from the Netherlands, with a line-up featuring five Czech players, kept on the offensive pressure, scoring at least a run in every inning -- though never more than two -- against Seth Ross, who pitched the first four innings for the Stags and Kristof van Aaarsen, who pitched the next two.

Damon Brown came in to pitch the top of the seventh for the Stags, and quickly sandwiched two fly ball outs around a walk.  But then the wheels came off, as the Czechs pounded out three singles and two doubles and the Stags committed their only two errors of the game.  The result was seven runs that ran the score out to 16-6 and took the game out of reach.

The Stags scored their first run in the bottom of the first inning, and at the time it tied the game at 1-1.

Tom Russell led off with a bunt and reached second base when the Dutch threw the ball away.  Tom advanced to third on a fly out by Amit Aswani and scored on a wild pitch by Dutch starter Matyas Zelinka, who pitched into the fifth inning.

By the time we got to that bottom of the fifth inning, the Flyers had built up a 7-1 lead, but the Stags fought back.

Amit Aswani led off with a walk and Kristof van Aarsen singled to centre field, sending Amit to third.

Things didn’t look all that promising when the next two batters were out, but Seth Ross walked to load the bases and two runs scored when the Dutch shortstop couldn’t handle Ieuan Gale’s sharply-hit grounder.

Seth Ross later scored on a stolen base, and the Stags had cut the deficit to 7-4 and forced the Dutch to change pitchers.

The Flyers made it 9-4 with two runs in the top of the sixth inning, but the Stags came right back with two of their own in the bottom half.

Tom Russell led off with a single but was out at second on a grounder by Amit Aswani.  A strikeout recorded the second out, but then consecutive doubles by Trent Nash and Lukas Kotek brought two runs home.

The Stags had fought their way back into the game – but then the Flyers scored those seven runs in the top of the seventh inning.

Damon Brown led off the bottom of the seventh with a single but was thrown out trying to stretch it to a double, and a fly out and a ground out ended the game.

The experienced Czech club team Chomutov Beavers scored nine runs in the bottom of the first inning against Stags’ guest pitcher Lucas Kotek, and added three more runs in the second inning against the pitching of Josh Peat, and that was the basis for a 12-0 four-inning mercy rule win.

The Stags had five hits against Chomutov pitcher Tomas Toka, had baserunners in three of the four innings and mounted a couple of threats, but couldn’t push any runs across.

In the top of the first inning, the Stags had singles by Tom Russell and Seth Benjamin, but a caught stealing threw a spanner into the rally.

In the top of the third inning, there were two-out singles by Tom Russell and Damon Brown, but a groundout ended the inning.

Ieuan Gale led off with a single in the top of the fourth inning and William Sinclair drew a two-out walk, but a strikeout ended the game.

The Czech outburst that decided the game in the bottom of the first inning featured eight hits, four of them doubles, plus a walk and an error, resulting in nine runs.

Unlike in the first two games of the tournament against Joudrs Prague and the Vennep Flyers, the Stags were unable to keep this one close.

First-round results have put the Stags into the Softball Europe Cup, to be played with a double-elimination format.  At noon Czech time on Thursday (11.00 am in the UK), the Stags, the fourth-place team in Pool B, will take on Magos Tenerife from Spain, who came third in Pool C.

Should the Stags win, they will play again at 5.30 pm on Thursday Czech time (4.30 pm in the UK).  Should they lose, they will play at 10.00 am local time on Friday, and a second loss will spell the end of their tournament, whereas a win will mean they keep playing.

Tuesday -- Most round-robin games on Tuesday at the 2022 European Men’s Super Cup were cancelled due to the heavy rain that fell on Monday night and soaked the fields, but four games did manage to get played at the end of the day.  The results of those games were:

Wednesday -- As a result of the games cancelled on Tuesday, a much heavier slate of games was played on Wednesday than originally scheduled to get the tournament back on course.  The results were:

Group standings at the conclusion of first-round play on Wednesday were:

The top two teams from each group will play for Super Cup medals in a double-elimination format, and the same format will be used for the nine other teams playing for medals in the Softball Europe Cup.