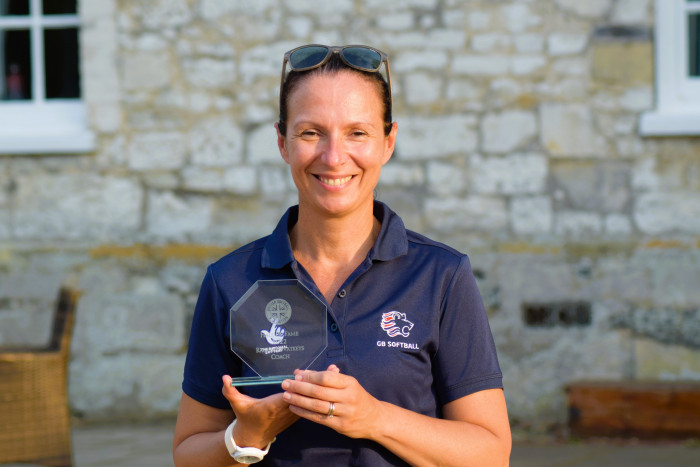 Great Britain Women’s Softball National Team Head Coach Rachael Watkeys, who has secured more wins and medals than any other Head Coach in the history of the programme, announced today that she is stepping down from her role after six years at the helm.

Watkeys, a British Softball Federation Hall of Famer, leaves the programme after achieving several significant milestones. During her tenure, Watkeys coached Great Britain at two World Championships, three European Championships, and an Olympic qualifier for the Tokyo Games, winning European Bronze in 2017 and 2019 and Silver in 2022, tying the best finish in programme history. At the 2019 Olympic Qualifier, Watkeys led a GB Women’s Team that came second, one game away from qualification, representing a new high-water mark for the programme.

Before joining the Senior Team as Head Coach, Watkeys was the Head Coach of the GB Under-19 Women’s National Team from 2013-2015 and again in 2017, leading that team at two World Championship competitions. Prior to coaching, Watkeys represented Great Britain as a player, including on the GB Women’s Team that won a European silver medal in 2009 and thereby qualified for the 2010 World Championships in Caracas, Venezuela, and for the team that placed third at the European Championship in 2011, after which Watkeys ended her playing career.

British Softball Federation President Ieuan Gale said, “On behalf of British Softball, I would like to express my most heartfelt gratitude and appreciation for Rachael's hard work over the last several years. With Rachael at the helm of the Women’s programme she has taken the team to the very top of European softball and right to the doorstep of Olympic qualification. Her work with the Women's Team and the U-19 Team before that has solidified the vital foundations for a programme that has such lofty aspirations. On behalf of players and coaches past, present and future, thank you.”

Away from the field, Watkeys is credited with professionalising the GB Senior Women’s Team programme and played a vital role in securing UK Sport National Squad Support Funding in 2020, in partnership with BaseballSoftballUK and the British Softball Federation. This funding has set the programme on a course for Olympic participation in 2028.

Watkeys is a 2022 British Softball Hall of Fame inductee in recognition of her work with the Senior National Team and the Under-19 Team, her tenure as a player and her wider impact on the sport. Her induction ceremony was held as part of this year’s GB Softball Training Camp at Bisham Abbey National Sports Centre prior to the European Women’s Championship.

John Boyd, CEO of BaseballSoftballUK, reflecting on Watkeys’s tenure as Head Coach, said, “Rachael has been a hugely important part of the GB Softball programme. Rachael’s coaching skills are matched by an unwavering professionalism off the field and in front of the media. The sport will be long indebted to her for her formative contribution to the UK Sport National Squads Support Fund plan. Rachael has changed the programme for good and for the better.

“Rachael has always given generously of her time and has been an advocate for the sport at every turn,” Boyd added, “and we wish her the best of luck and congratulations on a remarkable career.”

BSUK and GB Softball Head of Performance Systems Gary Anderson said, “Rachael should be justifiably proud of the achievements of the Women’s National Team during her tenure, topped off by a silver medal at the recent European Championship. A medal zone performance at a Continental championship is something many coaches aspire to and many never achieve. I know Rachael has career aspirations that she will now focus on and we wish her all the very best in that pursuit."

As is fitting, the closing words belong to Watkeys: “I want to thank the BSF for giving me the opportunity and trusting me in this role for all these years. I wish nothing but the best for the programme and the women's team in the future. If I can help the programme in any way to move forward, then I will always be available.”

BaseballSoftballUK and the British Softball Federation will begin recruitment for a new Head Coach in due course.  In 2023, the GB Women’s National Team will compete in one of three Group Stage tournaments leading to the World Baseball Softball Confederation Women’s World Cup in 2024.