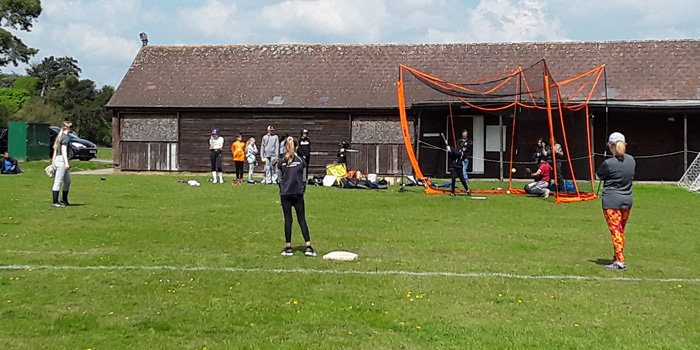 A new and important addition to the Great Britain Fastpitch League – a mixed Under-14 Junior GBFL – had its opening game on Sunday 24 April, playing alongside the adult fastpitch league at Farnham Park.

Twenty-two players from Wales, London and the area around Farnham Park had signed up for the Junior GBFL, and 20 of them were there on the day.

The athletes were divided into two teams and introduced to their coaches for the session: Matt Tomlin, Holly Ireland and Julie Spittle.  This was followed by a warm-up and then a game, with BSUK Fastpitch Development Manager Alyson Spinas-Valainis serving as the umpire.

The game was played with some rules differences compared to the adult GBFL.  If four balls or three strikes were pitched without the ball being put in play, then the batter could either hit a soft-tossed pitch or hit the ball off a tee.  Runners could only advance two bases on any one hit.  And for this opening day of play, there was an adult catcher in the form of GBFL Director David Morris, who found a gap in his GBFL schedule and was able to come across to help out.

Pitchers were Stella Albrecht for the A Team and Megan Rollins for the B Team, both players from the GB Under-13s.  The game featured a lot of hitting through soft toss as both Stella and Megan got their eye in and kept David on his toes at catcher!

This gave the defense plenty of balls to field and lots of plays to make.

The game ended 9-7 in favour of the A Team, who came from behind to win in the final inning.

MVPs from the game were Megan Rollins, Jack Leslie and Amelie Caesar. 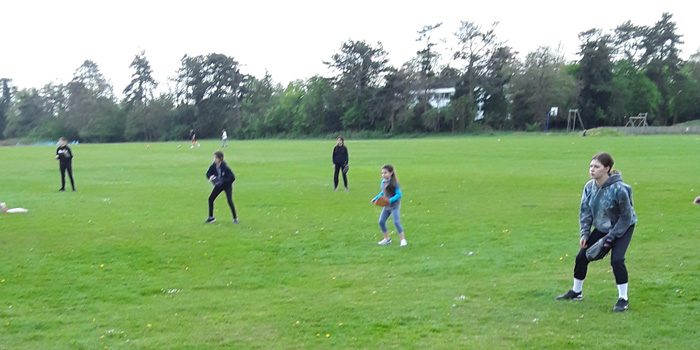 The Under-14 GBFL is scheduled to take place on Sundays at all six GBFL weekends across the season, with the hope that it can gradually be expanded to include additional teams.  All players Under-14 are welcome to attend (no previous fastpitch or even softball experience is necessary).

The initiative is intended to give a growing number of young fastpitch players game experience that will aid their transition to playing in the adult GBFL and provide encouragement for the most talented athletes to access the pathway towards Academy Softball and youth national team programmes.