London Cup brings international fastpitch back to the UK

Every national fastpitch team in  Europe, and most fastpitch club teams with European Cup aspirations, struggle with the same problem: they never get to play enough international games to prepare for ESF competitions.

The problem is particularly acute in Britain, where any international competition involves overseas travel and considerable expense for our teams.

So one answer -- though not without cost! -- is to bring international competition here.

And that's what the 2011 London Cup Invitational Fastpitch Tournament, held on May 28-29 at Richings Park Sports Club, was all about. 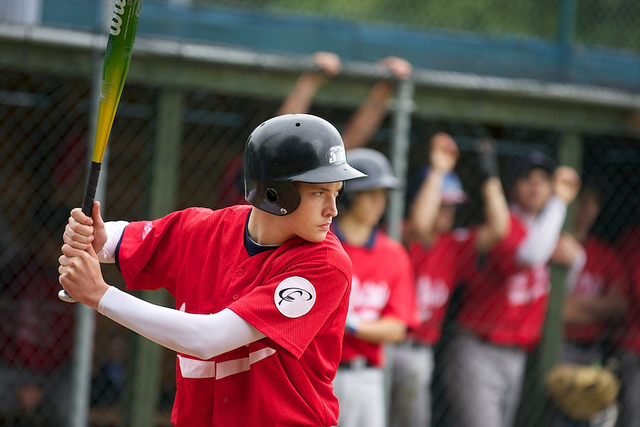 Back in the days when the GB Women's Fastpitch Team had funding from UK Sport, the London Cup was an annual event from 2002 through 2006, and the 2006 version was the biggest and best fastpitch tournament ever held here, with teams from the US, Spain, Greece, France and the Czech Repubic, plus almost the full GB Women's Team, overseas players and all, who took the tournament title.

Lack of funding has prevented the competition running between now and then.

But this year, a grant from the BSF has allowed the tournament to be revived, albeit on a smaller scale. Organised by BSUK on behalf of the GB Management Committee and the London Fastpitch Softball League (LFSL), the 2011 London Cup brought together a slightly strange assortment of national and club teams: the Danish National Women's Team, a representative women's team from Croatia, the GB Under-19 Women's and Men's Teams, and two of the three women's teams from Division 1 of the LFSL, Richings Park and the London Angels.

The GB Under-19 Men were playing in what was otherwise a women's tournament because they are a newly-formed team that will play in European Junior Championships in July for the first time since 2004, and they desperately need competitive games under their belts. While their results in the tournament didn't "count" and they weren't eligible to make the playoff round, they certainly picked up much-needed experience in winning one game, losing three and drawing two others.

Perhaps fittingly, when the GB Under-19 Men and Women met in the round-robin, the score was an 11-11 tie. The Junior Men certainly had more power, with Dexter Stewart and Tyler Gibbons pounding long home runs over the outfield fence, but the Junior Women had more experience and more consistent pitching. Score one for equality! 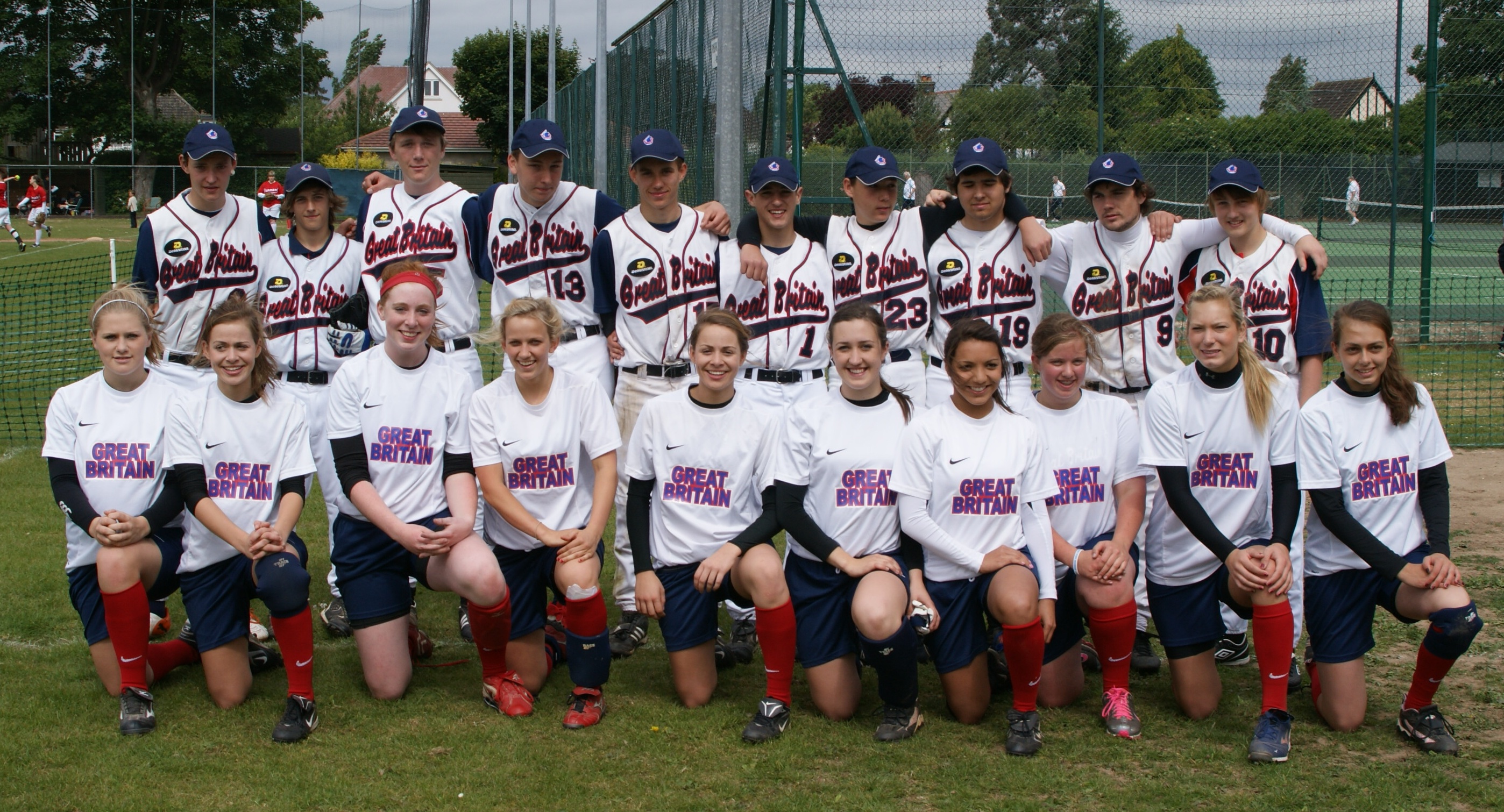 The London Cup champions were Richings Park, who went undefeated through the tournament (though they had to fight for two one-run wins in the round-robin against Croatia and the GB Junior Men). 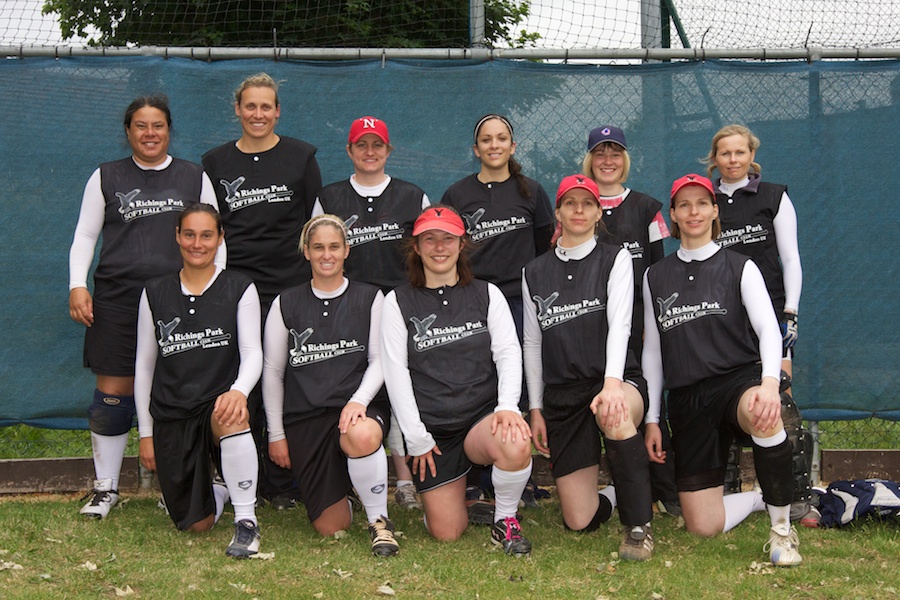 The Danish National Women's Team came second in the initial round robin and second in the tournament, but in three games against Richings Park (one in the round-robin and two in the Page Playoffs), the Danes scored a total of one run against the pitching of Tournament MVP Celine Lassaigne and the solid and sometimes spectacular fielding that Richings Park threw at them.

Otherwise, Denmark, who normally play in the European Championship B Pool but this year will play in the ESF's new one-pool Championship format along with GB and 18 other teams, had enough to pull out close round-robin wins by 6-5 over the GB Junior Women, 5-3 against London Angels and 7-4 over Croatia, plus a 15-14 loss to the GB Junior Men.

But in the 1 v 2 Page Playoff game, Richings Park shut the Danes out by a score of 8-0, and the Final was almost a repeat, with Richings Park winning 7-0.

Danish Head Coach (and GB Men's Fastpitch Team player) Kevin Stockman said, "This well-organised tournament was just what we needed to prepare for the Europeans. It was great to have so many good games in such a short space of time." 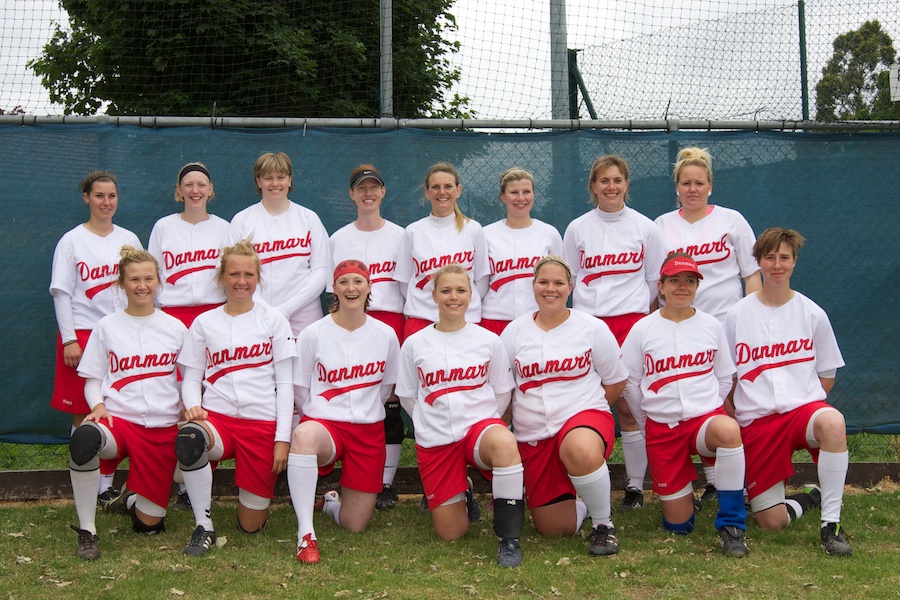 Third place went to the GB Junior Women's Team, who avenged a 7-6 round-robin defeat by Croatia with a 16-9 mauling in the Page Playoff 3 v 4 game to clinch at least a bronze medal finish. But in the tournament semi-final, the GB Juniors fell behind to six Danish runs in the first inning, and finished on the losing end of a 10-3 scoreline.

In some ways, it was a frustrating weekend for the GB Junior Women, who will soon face world-class opposition in the Canada Cup Open Futures Tournament in Vancouver in mid-July. Though they played very well in patches, and gained a fine new player in Canadian/British triallist Nicole Ratel, who hit two home runs and led the team in RBIs, the Junior Women could have won virtually every game they played, including a 7-3 loss to Richings Park, if not for mental and physical errors in the field.

The team batted extremely well, was aggressive on the bases and often effective in the field. They had excellent guest pitching from Lindsay Moore, a college teammate of GB Women player Steph Pearce, and in one game from Kylie Marshall of the London Angels. But game awareness let them down, often in just one bad inning per game -- and that's the difference between winning and losing. 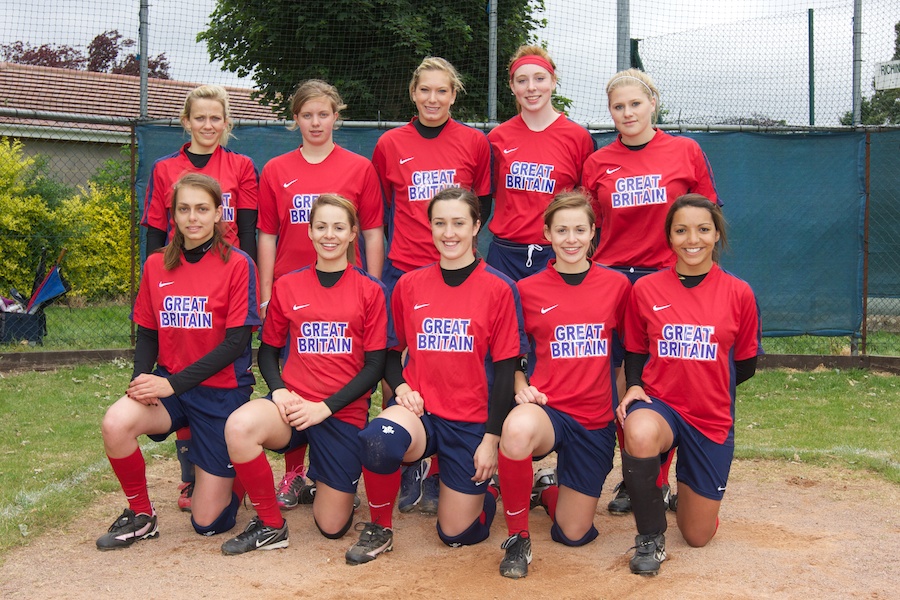 The team from Croatia, a mixture of club and some national team players, also had a series of close and well-contested games, losing by only 11-10 to Richings Park and 7-4 to Denmark, coming back to beat the GB Junior Women 7-6 on a walkoff walk and London Angels 10-2 and drawing 5-5 with the GB Junior Men. Those results put Croatia third in the round-robin standings.

But in the 3 v 4 Page Playoff game, Croatia was unable to hold the GB Junior Women, who scored six runs in the second inning, capped by a long home run over the left field fence by Nicole Ratel, and then nine runs in the fourth. Vicky Keswick had two singles in the fourth inning for GB, Amy Trask and Saskia Johnston drove in two runs each with singles and two Croatian pitchers gave up five walks while their fielders contributed three errors. 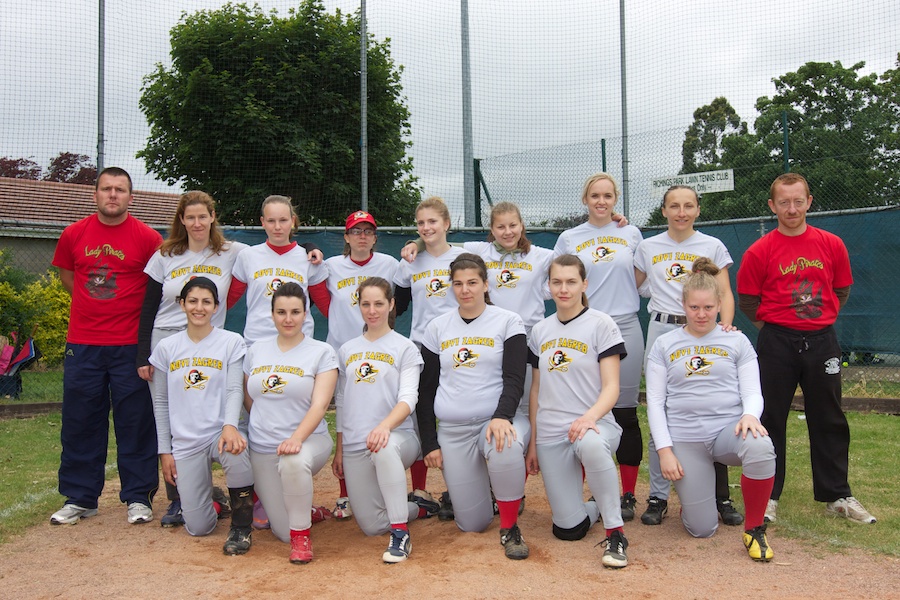 For London Angels, perennial domestic fastpitch league champions, 2011 may not be a good year. The Angels suffered some unexpected losses at the first London Fastpitch League date on May 8, and here their only victories came against the GB Junior Boys, by 7-6 in the round-robin and 12-10 in the fifth place playoff game. The Angels were missing players and suffered injuries during the tournament, notably to one of their two GB Women players, Steph Pearce.

But they will have been disturbed by three of their round-robin losses -- 20-1 to Richings Park (most of those runs came in a nightmare first inning), 9-2 to the GB Junior Women and 10-2 to Croatia. The Angels will need to regroup before they go to the European Cup B Pool later this summer. 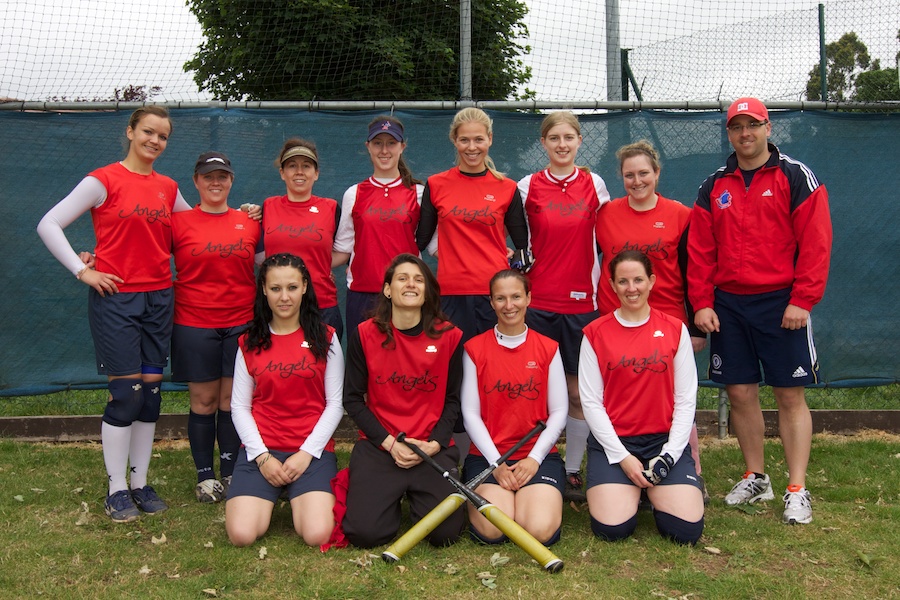 For the GB Junior Men, the chance to play six competitive games in two days was a godsend as they prepare for European Junior Championships in the Czech Republic in just over a month's time. And competitive was certainly the word. In five round-robin games, the Junior Men won a game by one run, lost two games by the same margin and drew their two other contests. Then they lost their fifth-place playoff by a massive two-run margin.

Games like this are a great preparation for the pressures of what will be a first European Championship for every member of the squad. 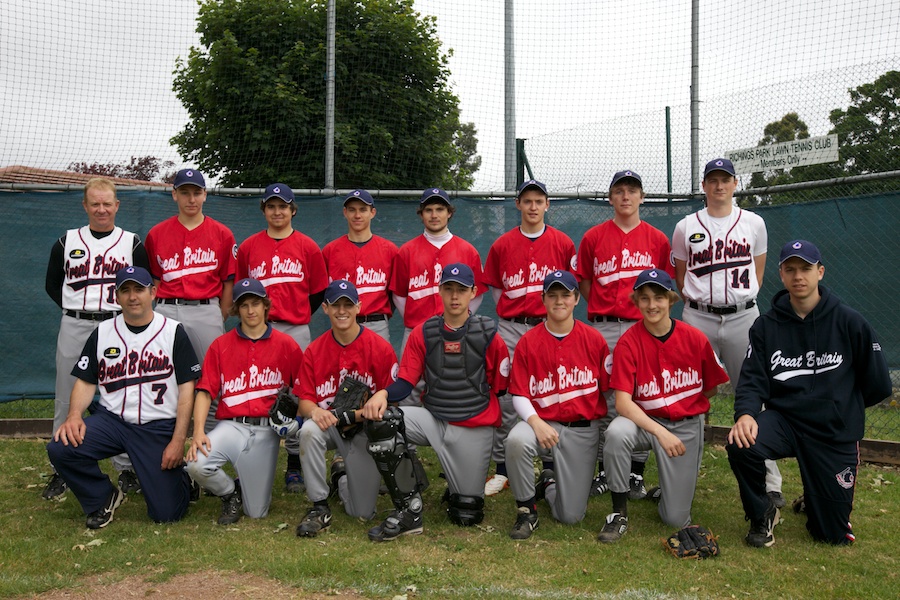 The tournament final between Denmark and Richings Park was a well-played game, with Richings Park committing only a single error and Denmark only two. But while Richings Park was able to chip away against Danish pitcher Maria Simonsen, with single runs in each of the first three innings and two runs each in the fifth and sixth, Denmark managed only two hits off Riching Park's Celine Lassaigne and only once had a runner get as far as third base.

Meanwhile, GB outfielder Laura Thompson (playing as a left-handed second base player in this game!) sparked the Richings Park offense with two singles, a walk, a long double off the left field fence and two runs scored. Celine Lassaigne had two hits and an RBI and Vicky Chapman singled in two runs in the fifth inning to take the game out of Danish reach, while Marketa Sulcova's triple and singles by Misha Sulcova and Milada Zolobova added to the Richings Park offense.

The game's outstanding moment came when the Richings Park infield pulled off a brilliant defense of the classic first-and-third double steal, getting the out at home and almost getting the trail runner at third as well, a perfect lesson in how the game should be played.

Having been revived after a five-year hiatus, the hope is that the London Cup can once again bring international fastpitch competition to the UK next year.

With all the teams having thoroughly enjoyed this year's event, the odds are good that someone will make it happen. 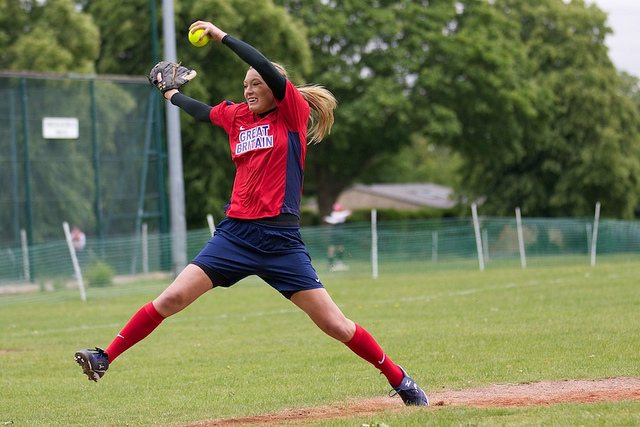 A lot of hard work goes on behind the scenes of any tournament, but an international event requires special efforts. The London Cup could not have happened without:

Stan Doney, BSUK's South East Regional Coach and Club Development Officer, whose contacts brought the Danish and Croatian teams to the UK and who put long hours into organising and setting up the event -- including turning the house where he lives with three roommates into a dormitory for 24 Croatians for nearly a week!

Bob Fromer, GB Fastpitch General Manager, who provided organisational support for the tournament and did all the transport for the Danish and Croatian teams.

Robert Kovacevic, the Croatian coach, who put in a whole day with Stan and Bob to set up the fields.

Spencer Suckling, who is responsible for fastpitch umpiring within BASU, never tires of trying to promote the format, and who assembled a top team of European and British umpires for the event, all of whom worked for no fee.

Tammy Moran from the Windsor & Maidenhead League,. who provided expert First Aid services throughout the weekend at special low rate.

Carmel Keswick, BSF Executive Secretary, and her son Ben, a professional chef, who organised an amazing array of food over the weekend, from salads to burgers to a full hog roast on Saturday night, and cooked and served it all with invaluable help from many GB parents, players and coaches. All of the money raised from the catering will go towards the cost of overseas competition this year for GB fastpitch teams.