Here's a little exercise for those of you who fancy yourselves as tournament organisers and schedule-makers.

The LSF Co-ed First Ball, run by BSUK on behalf of the LSF at Old Deer Park in Richmond on Saturday, May 21, had exactly that problem, and came up with an interestingly random schedule where the B-grade and C-grade tournaments each split into two unequal divisions and while teams in the smaller divisions played full round-robins, teams in the larger divisions played some of their divisional opponents but not others.

Then there was the fact that the groundskeepers at Old Deer Park neglected to do any mowing before the tournament (despite being repeatedly asked), with the result that some diamonds resembled a spring meadow more than a sports pitch, complete with little yellow flowers.

But the sun shone, play was good, the umpiring was impressively competent, and everyone seemed to have a good time. It's softball -- what more could anyone want? 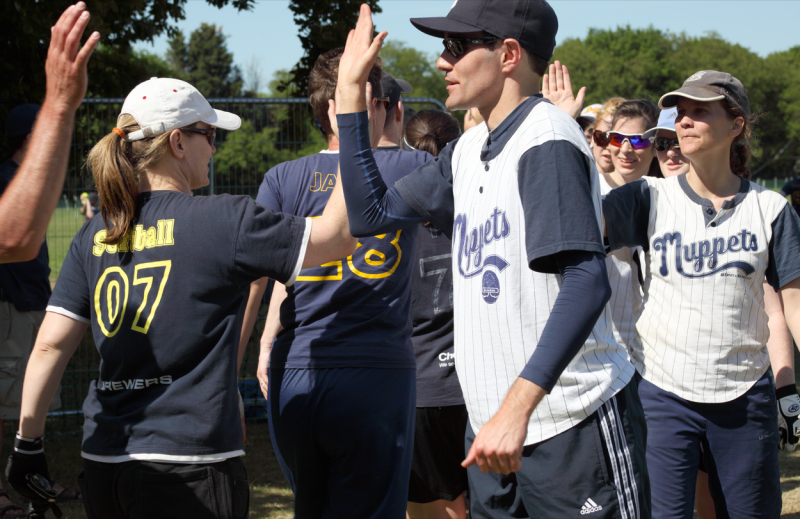 The 14 B-grade teams were divided into one eight-team group and one six-team group. A full round-robin was played in the six-team group, but in the larger group, teams played five of their opponents and missed playing the other two.

There were 35 round-robin games played in the B-grade competition and 15 of those games were decided by three runs or less (including some that ended up as ties), so a lot of exciting softball was played, along with a few blow-outs.

So Team Lakenheath met the Mighty Muppets in the Cup Final.

Lakenheath, which had a strong resemblance to the team that won the Softball World Series last September (and it takes an A-grade team to do that!) had won most of their games by large margins. So the Mighty Muppets deserve a lot of credit for holding Lakenheath to an 18-10 victory that took the Cup back up the A14 and A11 to East Anglia.

In the Plate Final, SPAM played Coyotes, and it was pretty much Coyotes all the way, with a bunch of home runs building up a 17-12 margin going into SPAM's last at-bat in the bottom of the seventh. But SPAM staged one of their patented last-inning rallies, knocking base hits through and over the Coyotes' defense, and Gemma Keenan just beat a strong throw with a great slide to score the winning run with two outs in an 18-17 SPAM comeback. 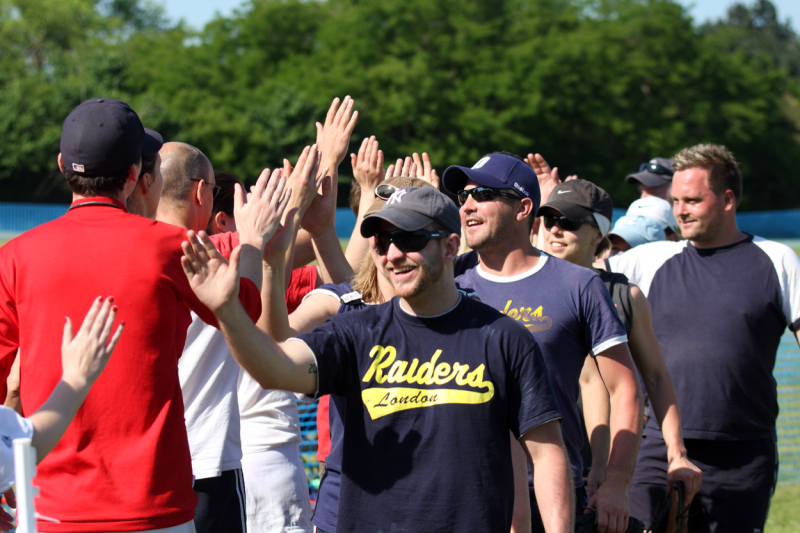 Each group contained two of the four teams entered from Raiders Softball Club, and the groups wound up like this:

This tournament then went to Cup and Plate semi-finals and finals.

In the Plate semi-finals, Raiders of the Lost Ark prevailed over 28 Raiders Later by 10-4, while The Mob swarmed all over the London Guerrillas by 19-7.

And The Mob carried the momentum through into the Plate final, with a close 17-13 win over Raiders of the Lost Ark.

Both Cup semi-finals were tense, well-played and close. Oxford Angels outlasted The Firm by 12-10 and then A Few Good Raiders squeaked out an even closer win by 12-11 over Meteors.

And it wasn't much different in the final, with A Few Good Raiders taking the Cup from Oxford Angels by 16-14.