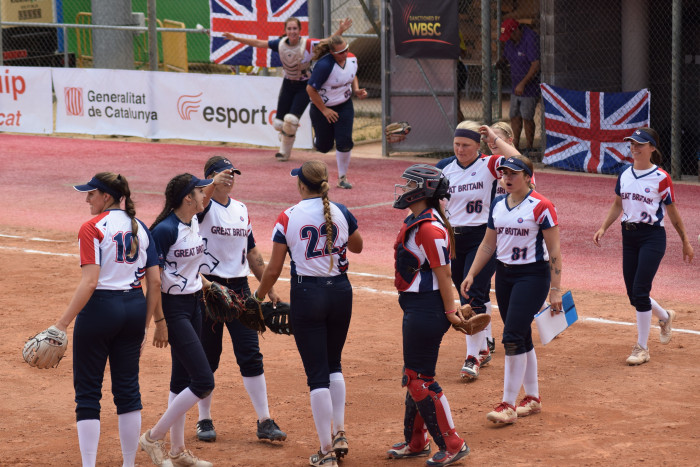 Sant Boi, Spain: 27 July –  Today, the GB Women’s Team did something none of their predecessors has ever done: they beat Italy in an official European or World

tournament game.  GB also beat France this afternoon and will go forward to the final Championship round-robin on Thursday and Friday in great shape.

Over many years, the GB Women’s Team has often come close to beating Italy at senior level in European and World Championship tournaments, and there have been some close and heart-breaking defeats, none more so than in the final of the Tokyo Olympic Qualifier three years ago to the day in the Netherlands.

But in all those games, dating back to a 2-1 loss in the 1999 Qualifier for the Sydney Olympics, Italy had always come out on top.

Today, a talented and resilient GB team came out on the right side of a 2-1 scoreline in an early afternoon encounter at the main venue for the 2022 European Women’s Championship in Sant Boi.

“The players had the belief that they could do this,” GB Head Coach Rachael Watkeys said after the game, “and that’s what carried them through when things got tight.”

Gary Anderson, Head of Performance Services for the GB Women’s programme, noted that the team had taken the historic result in their stride, with respect and without undue celebration, knowing that this result is only a step towards the main goal: a medal at this Championship and qualification for the World Cup Group Stages in 2023.

And to achieve that, they may well have to meet Italy again before this tournament is over.

After a brief trip back to the hotel for food and relaxation after the Italy game, the GB Team was back at Sant Boi for a 6.00 game against France, their last game in the second round Championship round-robin.

Understandably, this game lacked the energy and passion of the game against Italy, but GB put in a solid, professional performance, scoring eight runs in the top of the third inning and closing out the French 11-1 in just four innings.

As a result, the GB Women have topped their second-round pool, Pool E, with a 5-0 record (7-0 overall) and will now proceed to the final Championship round-robin, the six-team Pool X, with two wins and no losses carried forward.

An explanation of what this means, how Pool X will work, and how teams will qualify for the bronze and gold medal games on Saturday, is below.

As everyone expected, the eagerly-awaited GB-Italy clash between the two undefeated teams in Pool E was a tight, low-scoring pitcher’s duel between two pitchers with very different styles. 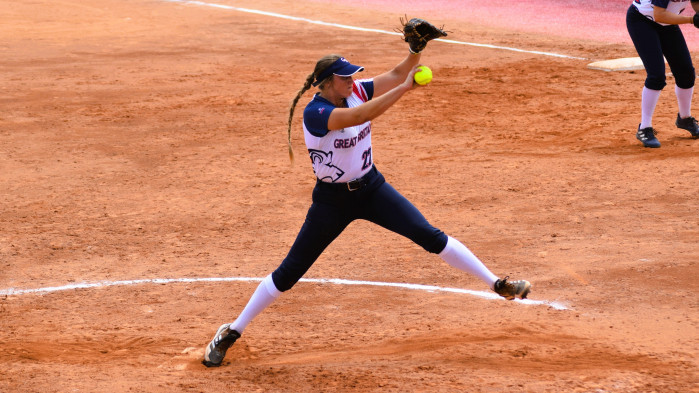 GB’s Georgina Corrick, voted the top college pitcher in the United States this year, throws hard, but also has good movement on most of her pitches and uses change-ups, rise balls, curve balls and screwballs as strikeout pitches, making her very hard for batters to predict.

Alexia Lacatena, for Italy, doesn’t throw hard at all, but her command and location is devastating, and she keeps the ball constantly on – and just off – the outside corner against both left-handed and right-handed batters, drawing a lot of foul balls but making solid contact very difficult.

With both pitchers on their game, the first five innings were scoreless and chances were few and far between, though Italy did get a runner to third base in the second inning and a runner to second base in the fourth.

After five innings, Italy had three hits and GB had two, neither pitcher had issued a walk, and it was hard to envision either team scoring.

But all that changed in the decisive sixth inning.

At first, it didn’t look like anything unusual was happening in the top of the sixth inning for GB as Aubrey Peterson led off with a strikeout and Tia Warsop couldn’t beat out a bunt.

But suddenly, Alexia Lacatena let a couple of pitches drift over the plate.  Sidney Brown poked one over the left side of the Italian infield for a base hit, and moments later, Katie Burge bounced a ground ball sharply up the middle, and GB had runners on first and second with two out – their biggest threat of the game.

Kendyl Scott let the count go to 1-1, and then Lacatena missed location again over the heart of the plate.  Kendyl lined the ball through the gap in right centre field and all the way to the fence for a triple, and GB had a dramatic 2-0 lead.

Italy’s reply came quickly in the bottom of the sixth, with a little help from the GB defense, as Italian lead-off hitter Fabrizia Marrone reached on an infield error.  Georgina Corrick got the dangerous Laura Vigna to fly out to Kendyl Scott in centre field, and then the Italians chose to bunt Marrone to second base and give up the second out.

This brought up Italian second base player Melany Sheldon, who smashed the hardest-hit ball of the day off Georgina Corrick over Katie Burge in left field.  The ball hit the fence, bounced up in the air, and Katie almost flipped it over the fence for what would have been a game-tying home run.  But the ball stayed in the field and Sheldon wound up at third with a triple while Marrone scored.

The next batter, McKenzie Barbara, had already had two singles in the game, so the GB coaches decided the discretion of an intentional walk was the better part of valour.  And the strategy worked: Elisa Cecchetti flew out to Tia Warsop near the right field line and GB still led, 2-1.

GB were quickly up and down in order in the top of the seventh inning, which brought the Italians to the plate for their final chance.

But Georgina Corrick found another gear in the bottom of the seventh, getting both Giulia Longhi and Sarah Edwards on brilliant called third strikes, and then inducing a lazy fly ball from Giulia Koutsoyanopulos to Katie Burge in left field to end the game. 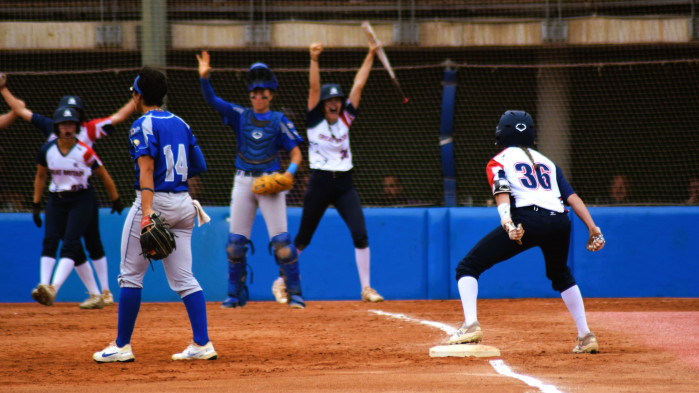 This GB Women’s Team made history today.  Can they go on to a first European Women’s Championship win at senior level?

In 2016, at this same venue, Georgina Corrick pitched the GB Under-19 Women to a gold medal, beating Italy 1-0 in the final.  Can lightning strike twice?

France has not won a game in Pool E, a fate that their play doesn’t deserve, but they weren’t able to trouble an understandably low-key GB Team coming down from the high of the Italy game and an exhausting 36 hours or so that began with a tough game against Ireland on Tuesday morning, then the game with Israel Tuesday evening that went past midnight, and then the tense struggle with the Italians.

French starter Enora Simon retired GB in order in the top of the first inning and France then got a runner to second base in the bottom of the inning against GB starter Rebecca Faulkner but couldn’t score her. 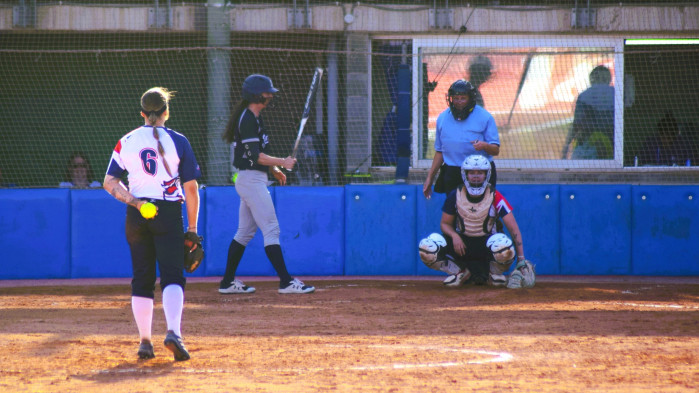 GB then pushed across three runs in the top of the second inning, the first when Chloe Wigington was hit by a pitch -- for the second time in the game -- with the bases loaded, and the other two on a single raked to left centre field by Tia Warsop.

Chloe is certainly the hit-by-pitch leader in GB softball history, and – who knows – maybe in the history of the sport.

France rallied in the bottom of the second inning, loading the bases against Rebecca Faulkner and drawing a bases-loaded walk that brought in Lena Sellah.  But Rebecca got a ground ball and a strikeout to get out of the inning, and GB then scored eight runs in the top of the third. 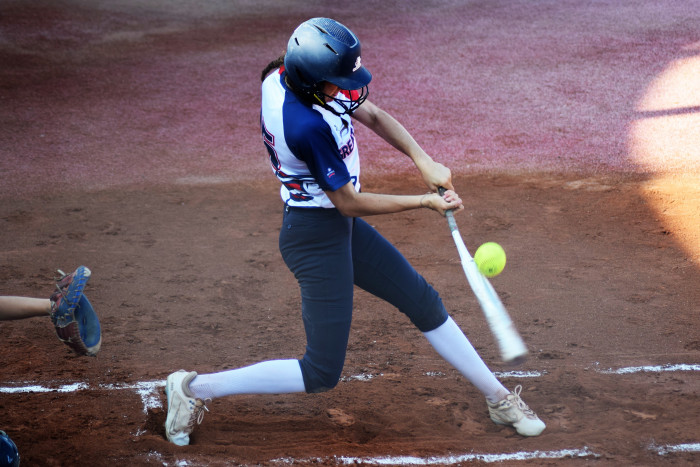 Above all, GB wanted to prevent the French scoring a run that would have required another inning, and Amie Hutchison made sure it wouldn’t happen by striking out Emma Patry on a beautiful changeup for the final out of the game.

Below are scores from games played at the European Women’s Championship on Wednesday.

Teams in Pool E and Pool F were engaged in Championship playoffs; teams in Pool G are playing for experience and placings.

Standings in Pools E , F and G after games playedon Wed nesday are:

Games in Pool G will carry on during Thursday and Friday. 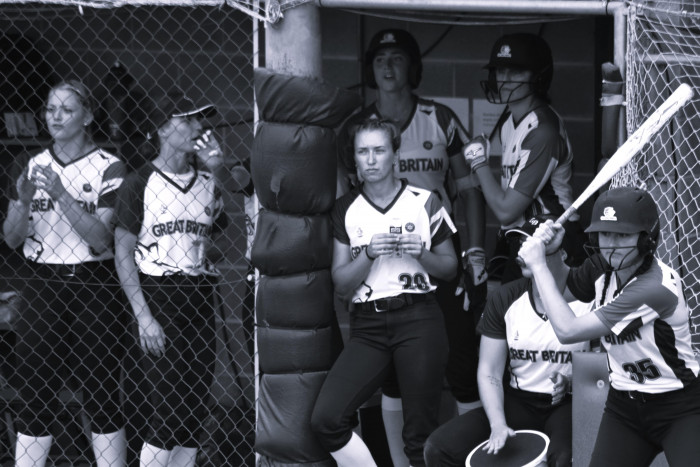 So the six teams in Pool X will begin with the following records:

Three wins will get GB to the gold medal game; two wins might. Watch this space.

All GB games during the tournament will be webstreamed, and the broadcasts can be accessed on https://www.youtube.com/wbsceurope for free or on ESport Plus.

Game reports will be posted each day on this website.