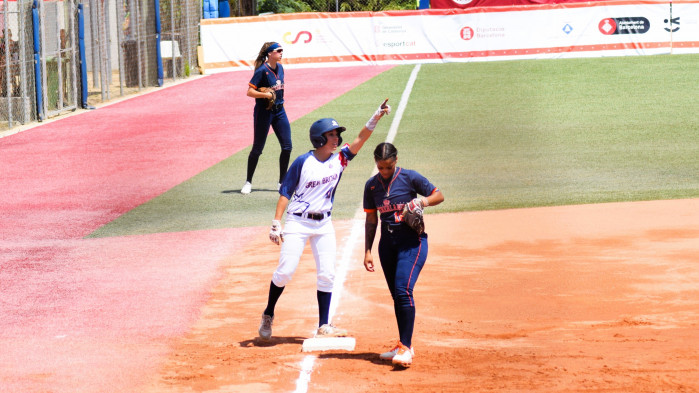 Sant Boi, Spain: 28 July – The undefeated GB Women’s Team rolled over the Netherlands and then over Spain on Thursday at the European Women’s Championship and

has secured a place in the gold medal game on Saturday with a day to spare.

The team has also qualified to be one of three teams from Europe that will compete in the Group Stage of the WBSC Women’s World Cup next year, since GB cannot now finish lower than second in this competition.

But the team has just one goal in mind – a first European Championship gold medal at senior level.

Without question, the GB Women have been the best team in the tournament to date.  They are the only team without a defeat and have won nine straight games in which they have outscored their opponents by 88 runs to six.  The offense has been relentless and clinical, with GB constantly on the attack; the pitching has largely been dominant; and the defense has almost been flawless, with just three errors in nine games.

In the process, GB has beaten European Champions and Olympic Qualifiers Italy for the first time ever, and today, in beating the Dutch for the third time in their last four meetings, were clearly the dominant team.

This is the 23rd European Women’s Championship, dating back to 1979, and no one except Italy or the Netherlands has ever won it.  On Saturday, the GB Women will try to make European softball history.

Their opponent in the final looks likely to be the Netherlands, who beat Italy 3-2 in a crucial clash Thursday evening on a walk-off home run by Suka van Gurp leading off in the bottom of the seventh inning -- though upsets in Friday’s games could still change that. 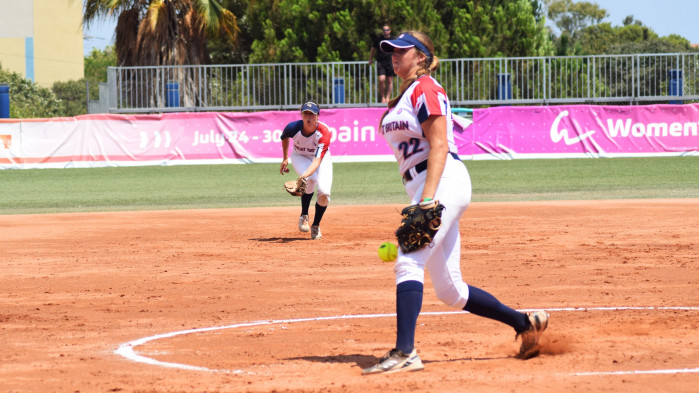 GB’s Georgina Corrick pitched another gem in this game, allowing a powerful Dutch line-up just two hits and setting the Dutch down in order in five of their seven innings, with no walks allowed and 11 strikeouts.

As they have done so often in this tournament, GB used the speed at the top of their line-up to take an early lead, scoring once in the top of the first inning.  But though GB had runners on base in five of their seven innings, and put the Dutch under constant pressure, the score stayed at 1-0 until the top of the sixth inning, when a four-run GB outburst chased Dutch starter Lisa Hop and settled the game.

GB’s run in the first inning came after two were out and no one on.  Katie Burge’s speed forced a throwing error by Lisa Hop on a bouncer back to the pitcher, and Katie wound up at second base.  Kendyl Scott was hit by a pitch and then Lauren Evans stroked the first of two RBI singles in the game to right field, and Katie crossed the plate to give GB the lead.

A one-run lead is always precarious, especially against a team with the talent and history of the Dutch, though it almost felt, as the innings went by, that one run might be enough given the way Georgina Corrick was pitching.  In the event, GB didn’t have to test that hypothesis

Kendyl Scott led off the top of the sixth inning by drawing the first walk of the game issued by a possibly tiring Lisa Hop, and took second on a wild pitch.  That brought Lauren Evans to the plate and a sharp single to right centre field brought in Kendyl to make the score 2-0.

Then the inning got increasingly tense for both teams.  Rebecca Faulkner singled to right field, but Lisa Hop struck out Georgina Corrick.  Amy Moore worked a walk to load the bases, and the Dutch decided to replace the relatively hard-throwing Hop with the soft tosses and movement of Marielle Vleugels.

The first hitter Vleugels faced was Morgan Salmon, who worked the count full and fouled off a number of pitches, but finally struck out on a pitch low and away.

That brought up lead-off hitter Tia Warsop, and Marielle Vleugels made the mistake of falling behind 3-0.  Tia took a strike, but Vleugels had to throw another, and this one was smoked down the right field line and into the corner as three GB runners scored and the game soared away from the Dutch. 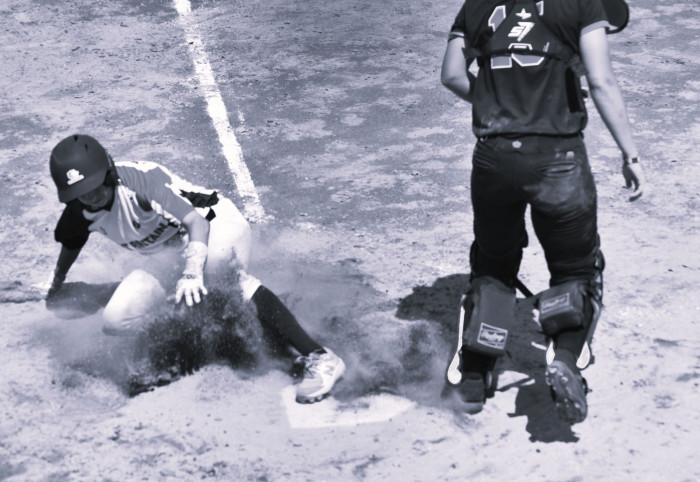 The Netherlands got a runner to third with two out in the bottom of the sixth inning on a single and two stolen bases by the veteran Britt Vonk, but Georgina Corrick struck out Brenda Beers to end the threat.

In the bottom of the seventh inning, the Dutch went down in order, with Georgina Corrick striking out Marielle Vleugels on a beautifully-disguised changeup to end the game.

This was a key win for the GB Women, because it put them in control of Pool X, the final six-team Championship round-robin, with games coming up against the Spanish later on Thursday and the Czech Republic on Friday.

The assignment from Head Coach Rachael Watkeys and the GB staff for the game against Spain was the same as it’s been throughout most of the tournament: finish things off in the minimum number of innings and keep the momentum going.

The GB Women have been carrying out this kind of assignment throughout the week, and they did it again on Thursday evening against the host team.

Georgina Corrick pitched the first two innings and gave up one hit while striking out four.

Rebecca Faulkner pitched the final two innings, giving up two hits and striking out two.  Over the course of the game, the Spanish got just one runner as far as second base.

Meanwhile, the GB attack was on the case immediately in the bottom of the first inning,  The first three batters – Tia Warsop, Sydney Brown and Katie Burge -- reached base on two walks and an infield single, and then Kendyl Scott drove two runners in with a double to right centre field.  That was the signal for Spain to take off starter Beatriz Alonso after just four batters and bring in Beatriz Parejo.

But she didn’t fare much better, as a ground ball by Lauren Evans brought in a third GB run and a sacrifice fly by Amie Hutchison brought in a fourth.  Actually, it wasn’t so much a fly ball as a pop-up on which Spanish shortstop Carla Segura made a good catch, but she was in no position to make a throw and Kendyl Scott alertly tagged up and came home.

That pitching change was the start of a merry-go-round for Spain, who used five different pitchers over the four innings the game lasted, with the starter, Beatriz Alonso, coming back for a brief second go towards the end of the second inning.

Meanwhile, GB’s goal was a four-inning mercy rule win, which would require a 10-run margin, and so they just kept scoring. 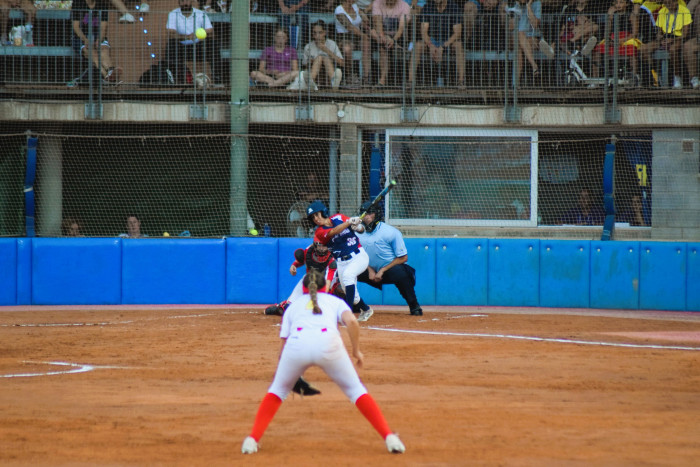 Four more runs crossed the plate in the bottom of the second inning, three of them on a home run by Kendyl Scott that cleared the fence in left centre field, and the other on Amy Moore’s sacrifice fly.  That made the score 8-0 to GB.

The ninth run came in the bottom of the third inning when Sydney Brown singled to left and kept going all the way to third when left fielder Roser Jonas misplayed the ball.  Sydney scored on a sacrifice fly by Katie Burge.

GB didn’t waste any time producing the walk-off tenth run in the bottom of the fourth inning.

Lauren Evans led off by lashing a triple down the right field line and Amie Hutchison drove her in with a hard-hit single up the middle.  Game over.

“There are two more games left,” Rachael Watkeys told the team after the game, “and we need to make sure we prepare properly for them.  You’ve been the best team here; now we need to turn that into the gold medal.”

Director of Performance Services Gary Anderson said, “This team is on the verge of something special.” 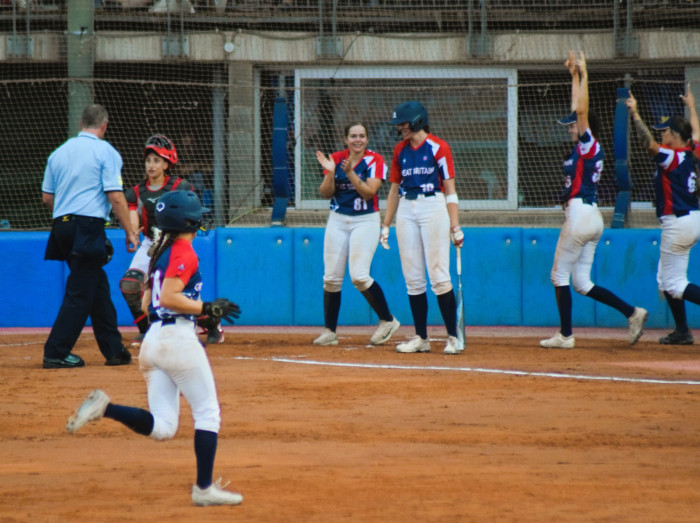 Below are scores, standings and an explanation of how the final stage of the European Women’s Championship will play out.

Starting on Thursday morning, the top six teams left in the tournament have been competing in a final round-robin, Pool X, to determine which teams will play in the gold and bronze medal games on Saturday.

Scores from Pool X games on Thursday were:

Pool X standings at the end of Thursday, including results carried forward from the previous round, were:

On Friday, the Netherlands will play Israel, Italy will play Spain and GB will play the Czech Republic.  GB is already guaranteed a place in the gold medal game, regardless of our result against the Czechs, and unless Israel can pull off a stunning upset against the Dutch on Friday, it will be a GB-Netherlands final.

Those were the teams that met in the gold medal game at the 2009 European Women’s Championship in Valencia, Spain, the only other time the GB Women have reached a European Championship final.  On that occasion, the Dutch won 4-0.  This GB Team is determined that the result on Saturday will be different.

Meanwhile, the six teams that didn’t make it to Pool X are playing in another round-robin, Pool Y, to determine places 7-12 in the final standings.  Scores from Pool Y on Thursday were:

Pool Y standings at the end of Thursday, including results carried forward from the previous round, were:

Finally, the remaining nine teams in the competition that did not make the Championship playoff rounds are continuing to play a round-robin, Pool G, that will determine places 13-21 in the final tournament standings.  Scores from Pool G on Thursday were:

Pool G standings at the end of Thursday were:

Games in Pool G will finish on Friday.

All GB games during the European Women’s Championship are being webstreamed, and the broadcasts can be accessed on https://www.youtube.com/wbsceurope for free or on ESport Plus.

Game reports will be posted each day on this website.

As might be expected, GB players were all over the leaderboard in statistics for the tournament at the end of Thursday's games.

With regard to batting stats, Lauren Evans was fifth in the tournament in batting average at .571.

Katie Burge led the tournament in triples with five, while Kendyl Scott was fifth in doubles with three.

Finally, Kendyl Scott led the tournament in slugging percentage at 1.111 while Katie Burge was fifth at .913.

As far as pitching is concerned, Georgina Corrick is dominating the stats: first in wins with five and complete games with four, first in earned run average (0.00) and strikeouts (44) and fifth -- a good sign -- in innings pitched with 26.2.