Sant Boi, Spain: 29 July – The GB Women’s Team played their final round-robin game on Friday night at the European Women’s Championship knowing that they were

already in tomorrow’s final, and they will quickly put a 9-0 loss in five innings to the Czech Republic behind them.

It wasn’t the best prelude to a gold medal game at a European Championship, but on the other hand the game meant nothing significant to either team.  GB had already qualified for Saturday’s gold medal game, where they will face the Netherlands, and the Czechs knew they would be in Saturday’s bronze medal game against Italy, a game that will determine which of the two teams will qualify to play in one of the WBSC World Cup Group Stage tournaments in 2023.

Both GB and the Netherlands don’t need to worry about that: they have already qualified.

So the GB Team may have come to tonight’s game with Saturday’s final on their minds, or they may have found it hard to raise the same energy levels that have been on display during a long week for a game whose outcome didn’t matter.

For the GB Women, the focus now will be on their gold medal clash with the Dutch at 6.00 pm Spanish time (5.00 pm in the UK) on Saturday evening, where GB will try to become the first country other than the Netherlands or Italy to ever win a European Championship.

When GB met the Netherlands on Thursday, GB were much the better team in a 5-0 win that put them into the final.  The Dutch only earned their spot late on Friday night with a tight walk-off 3-2 win over Italy.

“You are still the best team in this tournament,” the coaches told the players after the Czech game.  “We believe in you and, more importantly, we know you believe in yourselves.” 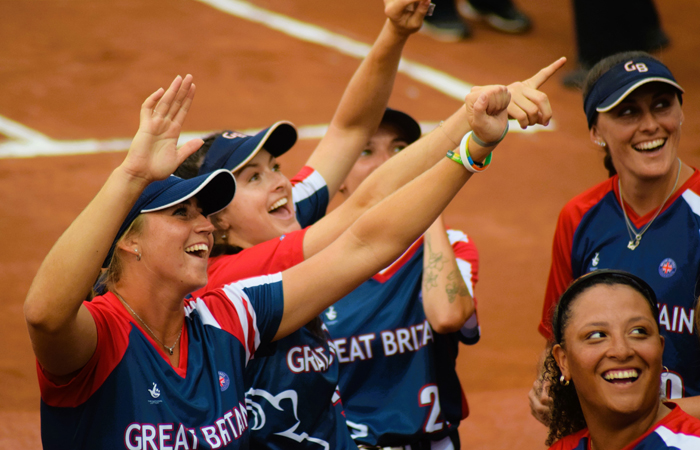 The GB offense never got going in this game against Czech pitcher Anna Zoulova, who pitched all five innings and gave up just two hits plus a walk and a hit batter.  The hit batter, inevitably, was Chloe Wigington in a fifth-inning pinch-hit appearance.

The Czech offense, on the other hand, pounded out 12 hits against GB starter Rebecca Faulkner, who pitched two-and-two-thirds innings, and Amie Hutchison, who pitched the best of the game.

The Czechs also had the benefit of three walks and five GB errors, including a bizarre sequence of miscues in the top of the first inning when the Czechs scored their first two runs.

With one out in the top of the first, Czech centre fielder Eliska Thompsonova singled to centre field.  The next batter, Barbora Saviola, hit a sharp ground ball on the first base side of second.  Morgan Salmon made a fine stop but then tried to make the more difficult throw to get Thompsonova at second rather than try for the out at first. 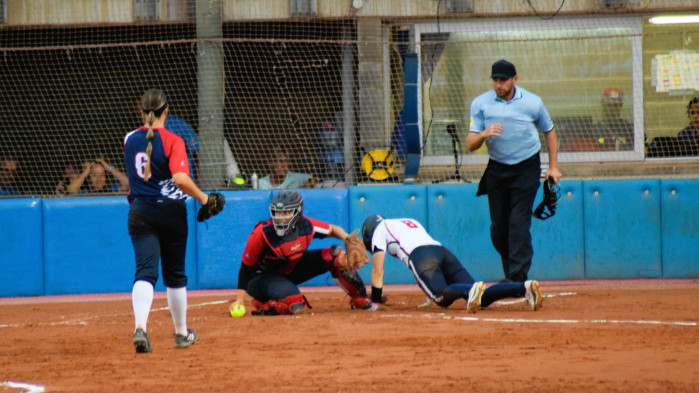 The GB defense had made as many errors on one play – three – as in the previous nine games.

That play kind of set the tone for the rest of the game.

Saviola, who wound up on third, scored on a single by the next hitter, Gabriela Slaba.  Rebecca Faulkner then pitched well to get out of the inning with no further damage, but a pattern had been set that continued throughout most of the game, with the GB offense going down quietly and the Czechs – apart from the fourth inning when Amie Hutchison set them down in order – scoring runs.

The Czechs got one run in the second inning, and five more in the fourth to bring the score, at 8-0, into five-inning mercy rule territory.

GB’s two hits were a sharp single to right field by Lauren Evans in the bottom of the second inning – but she was immediately erased on a double play – and an infield hit by Sydney Brown in the bottom of the fourth inning, followed shortly by a walk to Kendyl Scott.  But those two runners were stranded, and the Czechs added one more run in the top of the fifth inning to bring the score to 9-0.

Despite the uncharacteristic errors that GB made in this game, they also made some fine defensive plays.  In the second inning, Rebecca Faulkner made a good play on a comebacker to cut down a Czech runner, Katerina Vackova, at the plate, and later in the inning, a throw home from Katie Burge in left field to catcher Amy Moore, who fired back to Amie Hutchison at third, erased another Czech runner.  In the fifth inning, a great throw from Kendyl Scott in centre field stopped Magdalena Kavanova from stretching a single into a double. 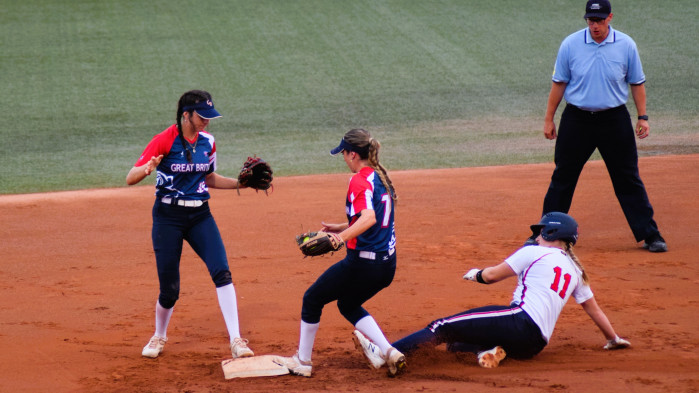 GB thought they had a consolation run in the bottom of the fifth inning when Chloe Wigington was hit by a pitch, stole second and came home when Tia Warsop’s two-out ground ball went right through Magdalena Kavanova at second base.  But a mix-up meant that Tia had batted out of order, and the batter who should have been at the plate, Morgan Salmon, was called out by rule, nullifying the run.

The task now, as the team is well aware, is to put this game behind them because there is a glittering prize in sight on Saturday.  This is a talented, brave and resilient team and they should be fine tomorrow.

Since all games in the 2022 European Women’s Championship are now finished apart from the bronze and gold medal games on Saturday, each team has been asked to select one of their players as their team’s MVP for the tournament.  The winner of this award was for GB Women was Georgina Corrick, statistically the top pitcher in the tournament so far, who of course will start tomorrow’s final.

Below are final scores and standings for all but tomorrow’s medal games.

Over Thursday and Friday, the top six teams left in the tournament have competed in a final round-robin, Pool X, to determine which teams would play in the gold and bronze medal games on Saturday.

Scores from the final Pool X games on Friday were:

Final Pool X standings, including results carried forward from the previous round, were:

The top four placings will be decided in tomorrow’s medal games, but Spain will finish fifth in the final tournament standings and Israel sixth.

The six teams that didn’t make it to Pool X have been playing in another round-robin, Pool Y, to determine places 7-12 in the final standings.  Scores from the final Pool Y games on Friday were:

Final Pool Y standings, including results carried forward from the previous round, are:

These teams will fill places 7-12, in the order above, in the final tournament standings.

Finally, the remaining nine teams in the competition that did not make the Championship playoff rounds have been playing their own round-robin, Pool G, to determine places 13-21 in the final tournament standings.  Scores from the final Pool G games on Friday were:

These teams will fill places 13-21, in the order shown above, in the final tournament standings.

All GB games during the European Women’s Championship are being webstreamed, and the broadcasts can be accessed on https://www.youtube.com/wbsceurope for free or on ESport Plus.

Game reports are posted each day on this website.