GB Women fall to the Netherlands in European Championship final 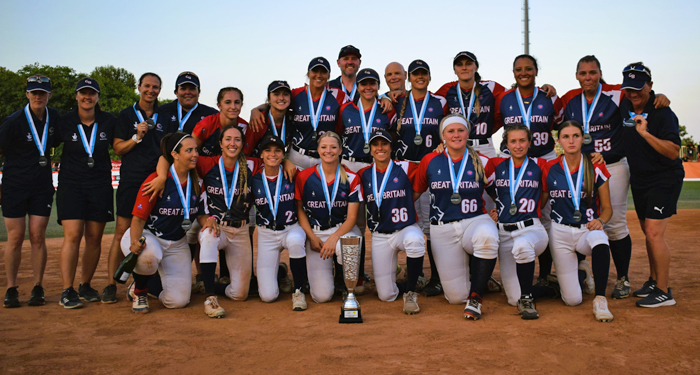 Sant Boi, Spain: 30 July –  A GB Women’s Team that had played exciting and at times dominant softball for most of the 2022 European Women’s Championship couldn’t reproduce that form in Saturday’s gold medal game against the Netherlands and lost by 7-0.

Just as in the final of the last tournament they played before this week, the Europe/Africa Olympic Qualifying Tournament in July 2019, GB had to settle for a silver medal – still a tremendous accomplishment and a sign of real progress for the programme, but not what the team had hoped for. 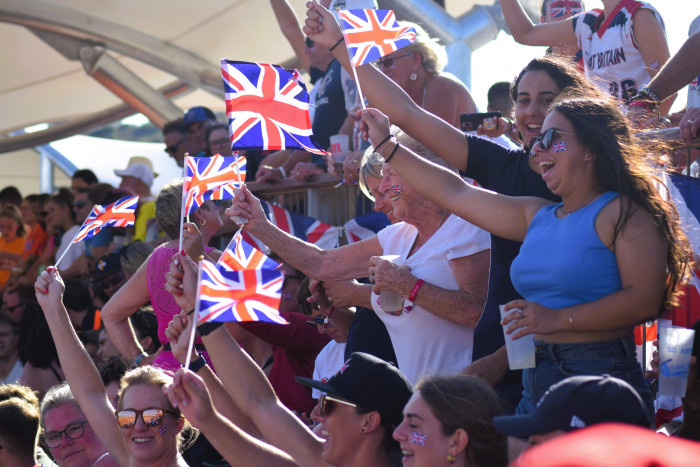 Today’s game was played in front of an absolutely packed stadium in Sant Boi de Llobregat, a suburb of Barcelona, in front of a vociferous group of GB supporters but many more who were supporting the Dutch.  And in many ways, the game was a mirror image of the game that GB and the Netherlands had played on Thursday.  In that game, GB pitcher Georgina Corrick held the Dutch to just two hits and no runs, and the GB offense put serious pressure on the Dutch in five of the seven innings played.

Today, Dutch left-handed pitcher Eva Voortman held the GB offense to just one hit plus a hit and no runs, and the Dutch offense put pressure on GB and Georgina Corrick in five of the seven innings played.

An important factor may have been that the Dutch had faced Georgina two days ago and were able to make some adjustments in this game, whereas the GB hitters were seeing Eva Voortman for the first time and never managed to work her out.

Voortman threw just over 80 pitches and two-thirds of them were strikes, so with the exception of a couple of walks, she was able to work constantly ahead of the hitters, striking out eight.

GB’s only hit of the game was a hard smash up the middle by Georgina Corrick that struck and caromed off Voortman in the bottom of the fifth inning with no outs and Lauren Evans already on base via a hit-by-pitch.

Those two baserunners were GB’s biggest threat of the game, but Eva Voortman quickly disposed of the next three batters on a strikeout, an infield pop-up and another strikeout. 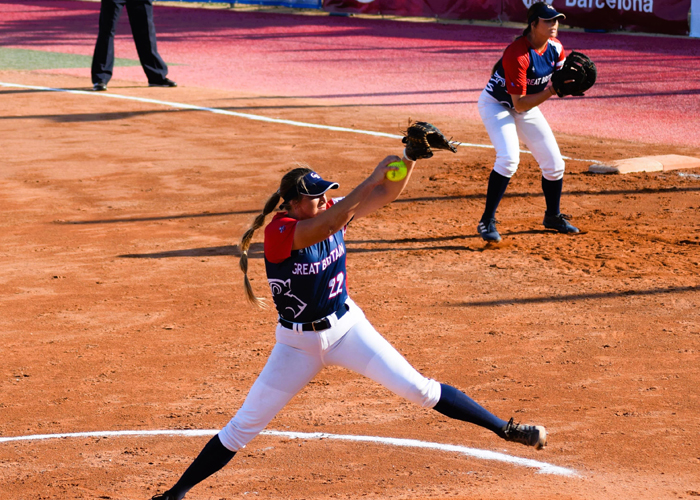 Georgina Corrick pitched a brave and excellent game, striking out 13 Dutch hitters.  However, she gave up nine hits, not all of them well-hit but a few of them quite well-placed.  Even so, it was a GB error that allowed the Dutch to take the lead with three runs in the top of the third inning, and that always looked like it might be enough for Eva Voortman to work with.

An example of how things were going for GB in this game could be summed in this little cameo.  In the bottom of the fourth inning, GB centre fielder Kendyl Scott smashed a line drive to centre field, but her Dutch counterpart, centre fielder Brenda Beers, made a sprawling, diving catch to take a hit away.  Half an inning later, Dutch DP Cindy van der Zanden hit a fly ball to short centre field and Kendyl made a sprawling, diving catch – only to see the ball just trickle out of her glove.  A moment later, on a very soft single up the middle by Dinet Oosting, van der Zenden scored the fifth Dutch run.

As always, a game of inches.

The first two innings were scoreless and featured an awful lot of strikeouts.  But Georgina Corrick was put under pressure from the off.  Dutch shortstop Britt Vonk, the first batter of the game, drove a long fly ball down the right field line.  Off the bat, it looked like it might have enough to go out, but the wind kept the ball in the ball park and it hit off GB right fielder Tia Warsop’s glove as she tried to make what would have been a fine catch.

Vonk wound up on third with no one out, and any kind of hit was likely to score her.

But Georgina Corrick, working very carefully and using everything in her repertoire, struck out Brenda Beers swinging, walked Jessie van Aalst and then got a called third strike on Cindy van der Zenden on a changeup low and inside and another called third strike on Dinet Oosting on a pitch on the outside corner.

Britt Vonk was left stranded on third and the game remained scoreless.

GB hitters then had their first look at Eva Voortman, and the first three promptly went down on strikes.

Not to be outdone, Georgina Corrick struck out three Dutch hitters in order in the top of the second inning, one of just two innings in which there were no Dutch baserunners.

But the game came unstuck for GB in the top of the third.

Dutch third base player Damishah Charles led off the inning with a single to left field, Britt Vonk followed with a walk, Brenda Beers’s sacrifice bunt moved the runners up to second and third and Jessie van Aalst laid down a perfect bunt single to load the bases.

Georgina Corrick struck out Cindy van der Zanden for the second out, and it looked like GB might escape again when Dinet Oosting hit a ground ball up the middle, close to second base.  But the GB defense couldn’t get an out and two runs scored as the ball trickled into centre field.  A third run later scored on a double steal where GB got the runner trying to get to second but not before the runner on third had crossed the plate.

Though it was only the top of the third inning, there was a sense that the game had now been settled, and that turned out to be the case.

The GB offense never got going, and the Dutch added single runs in the fourth and fifth innings and a final two in the top of the seventh on a two-run double by Jessie van Aalst.

So the monopoly that the Dutch and the Italians hold on the European Women’s Championship, going back 23 tournaments to 1979, remains intact.  However, given the fact that in most finals the Dutch and Italians have played each other, GB can take pride in today becoming only the second European team, along with the Czech Republic, to have provided the opposition twice to either the Netherlands or Italy in a European final.  GB did it this year and in 2009; the Czechs did it in 1999 and 2001 and only three other countries – Greece in 2005, Russia in 2003 and Belgium in 1990 – have done it once.

Eventually, the duopoly has to be broken, and the GB Women were convinced that this could be the year.

But the Dutch were the better team today and they earned the enormous trophy that Softball Europe gives – temporarily – to the winners.

The silver trophy was somewhat smaller. 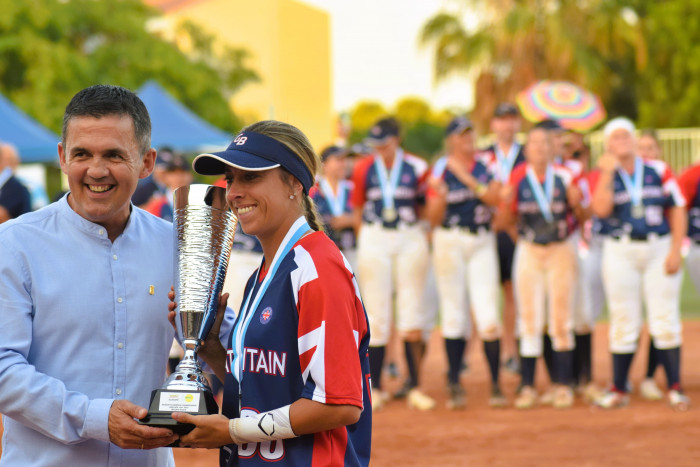 There is no question that the GB Women’s Team programme – now bolstered by funding from UK Sport through the National Lottery – is making progress.  Since 2017, GB has won two bronze and one silver medal at the European Women’s Championship, a bronze medal at the first European Super Six Tournament, reached the final of the Olympic Qualifier and has now qualified for a WBSC World Cup Group Stage tournament in 2023.

With exciting young players in the programme as well as high-quality veterans, the future is looking bright and the goal of a medal in the Los Angeles Olympics in 2028 is certainly a possibility.

But the task now is to improve even further, and there will be extensive debriefs once the dust settles on this tournament to look at how that can be achieved.

Only the bronze medal and gold medal games were played on the final day of the 2022 European Women’s Championship, and the scores were:

The final tournament standings (the top three teams qualify for the WBSC World Cup Group Stage tournaments in 2023) are:

For the next European Women’s Championship, the top eight teams above will get a bye to the second round while all other teams will have to play in preliminary round-robins, from which four more teams will join the top eight in the main competition.