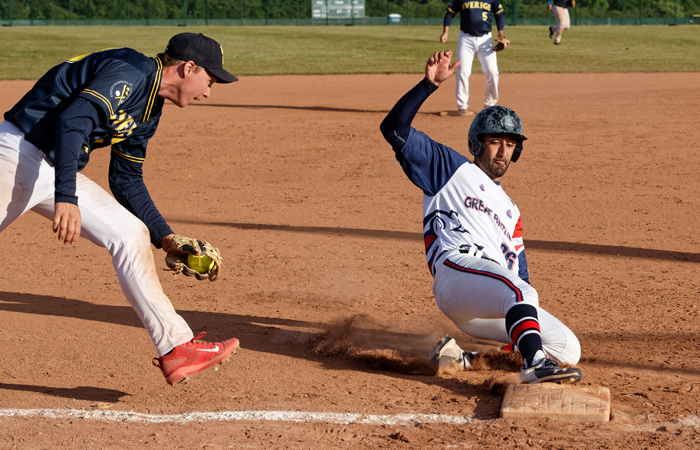 Team, and also for the position of Team Operations Manager.

Applications are also being invited for the position of Team Operations Manager for the team -- for more information on this, see below.

The Federation is looking for a Head Coach who will continue to take the GB Senior Men’s Fastpitch Team programme in a new direction established over the past few years, with the emphasis on selecting, training and playing British-based players.  However, overseas-based players with a British passport or the eligibility to acquire one are still welcome to trial for the team.

Anyone applying for the Head Coach position who is based outside the UK will be expected to travel to Britain on a regular basis to work with players in the UK and maintain and develop links between the Senior Men’s Team and the GB Under-23, Under-18 and Under-16 programmes.

The main responsibilities for the Head Coach of a GB National Team, working in conjunction with the Team Operations Manager and other staff, are to:

This latter point is particularly important because the team has passport-holding players based in other countries as well as in the UK.

Anyone interested in applying for the position of GB Senior Men’s Team Head Coach should complete the application form on this link.

Any questions about the position should be sent to BSF President Ieuan Gale.

The deadline for applying for this position is midnight on Friday 6 January 2023.

All staff positions on GB National Teams are voluntary; no one is paid a salary or fee.  However, costs for staff members are fully covered when a national team goes abroad for competition, and expenses connected with training and competition in the UK can be claimed if necessary.

Further information and references will be required and shortlisted candidates will be interviewed in person or electronically as circumstances allow.

GB Softball Team Operations Managers work as part of a staff group that includes the Head Coach, Assistant Coaches and the team physio or other medical personnel.

As with the Head Coach position advertised above, the Team Operations Manager position is voluntary: there is no salary or fee.  However, all costs for staff members are covered when a national team goes abroad for competition, and some expenses connected with training and competition in the UK can also be claimed if necessary.

Anyone interested in applying for this position should start by filling out a GB Staff Application Form on this link.

The deadline for applying for this position is midnight on Friday 6 January 2023.