GB Juniors get first win in Canada, then lose a winnable game

Vancouver, Canada: July 13 -- It was Day 2 yesterday for the GB Junior (Under-19) Women's Fastpitch Team at the 2011 Canadian Open Fastpitch Futures Gold Tournament, and the question quickly became not whether the GB Team could play at this level, but how many games they could win.

In the afternoon, GB picked up their first win in Canada in a crazy, sloppy extra-inning thriller against Regina Gold from Saskatchewan by a score of 9-8 when Nicole Ratel popped a single over shortstop with one out and the bases loaded in the bottom of the eighth inning to drive home Lauren Bromage with the winning run.

In the evening, GB trailed early to the Kelowna Heat from Alberta, came back to take the lead, then gave it away again in a flurry of misplays and eventually lost 9-4.

To make the playoff round, GB will have to win both games today, and that may be a tall order. But what is certain after two days and three tournament games is that playing here in Canada will be the learning experience it was designed to be. The GB Juniors are competitive in every game -- but they need to learn how to win more of them. 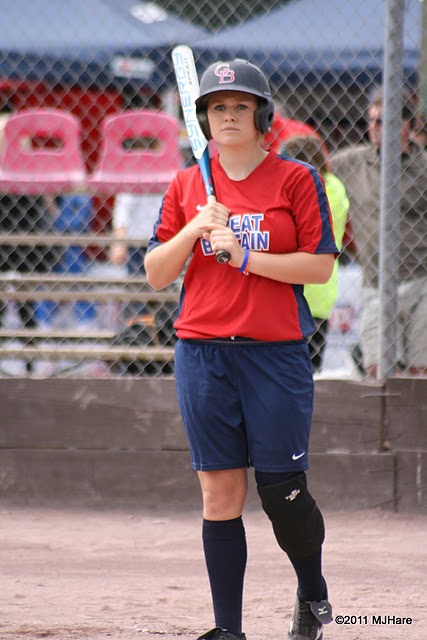 The GB Juniors have surrendered runs to the opposition in the first inning in five of the six tournament and scrimmage games they have played in Canada, and that's not generally recommended as a way to win games. But the team always seems to start slowly, with mental or physical errors often playing a key role.

So it was in the top of the first inning in yesterday afternoon's game against Regina Gold at Softball City.

Ellie Pamenter was the GB starting pitcher and she gave up a single to Regina leadoff hitter Rikki Wendel. The next hitter, Keeley Vanblarkom, laid down the obligatory bunt, but no one covered first base until too late and the Gold had two runners on with no one out.

Things often go badly wrong for GB in these situations; this time, they only went mildly wrong. Consecutive singles to left field by Ellen Kirkness and Meghan Grad brought two runs in for Regina, but then Ellie Pamenter stopped the bleeding and the inning ended without further scoring.

When the Gold scored three more runs -- all unearned -- in the top of the third inning against a very flat and error-prone GB team to take a 5-0 lead, it looked like this was going to be a hiding.

But in the bottom of the the third inning, GB bats came alive, Regina showed that they, too, were in a generous mood, and the game started to turn.

The long road back

Four runs in the bottom of the third inning -- none of them earned -- brought GB back into the game. Chloe Wigington and Vicky Keswick led off the inning with walks, and when Lauren Bromage lifted a fly ball to right field, Regina rightfielder Kayla Ruschkowski obligingly dropped it, scoring Chloe. Amy Wells reached on a fielder's choice to score Vicky, then alertly took second base on the play, so that Nicole Ratel's single to right-centre field scored both Lauren and Amy. From 5-0, the score was now 5-4.

But as they tend to do, GB handed two of those runs right back. Ellie Pamenter was about to get out of a two-on, two-out jam in the top of the fourth inning when Regina's Kristen Cruikshank hit a fly ball down the left field line. But the ball was dropped, two runs scored and Regina had a 7-4 lead.

The good thing was that GB seemed to have woken up from the torpor that had dogged them in the early part of the game, and they promptly scored three runs in the bottom of the fourth, this time without any help from their opponents, to tie the score.

Vicky Keswick opened with a bunt single, but was still the lone baserunner two outs later. Then Amy Trask walked and Nicole Ratel ripped a line drive double to left-centre, scoring Vicky and Louisa Scott, pinch-running for Amy. Nicole later went to third and then scored on wild pitches by tiring Regina pitcher Hanna Dunnigan, and suddenly GB had come all the way back and the score was 7-7.

Neither team scored in the fifth and sixth innings, but it took two very fine catches by GB shortstop Amy Wells to keep the Gold off the board in the sixth, one with her back to the diamond in left-centre field and the other in foul territory behind third base. 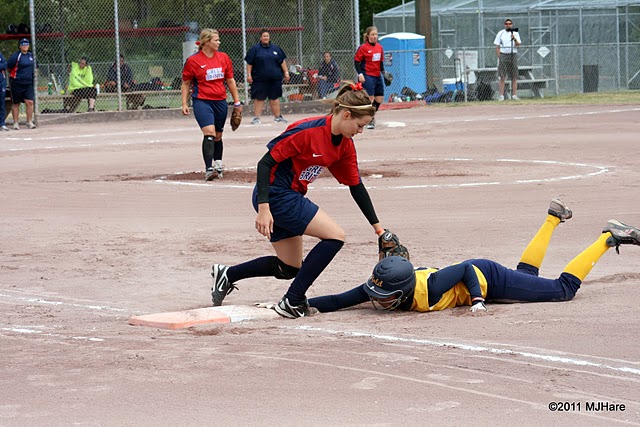 It was vital to keep Regina from scoring in the top of the seventh inning, but GB couldn't quite do it. Sydney Holoien singled to start the inning and one out later a single by Rikki Wendel and a double by Keeley Vanblarkom brought one run in and threatened more. However, Ellie Pamenter then struck out number three hitter Alex Baylack with a fine pitch on the outside corner and got clean-up hitter Ellen Kirkless to fly out. But it was now do or die for GB in the bottom of the seventh.

Things looked good when Ellie Pamenter singled off the pitcher's glove to open the inning and Sara Robb drove a single to right-centre field. Regina changed pitchers at this point, but when pinch-hitter Carling Hare bounced into a force play at second base, Ellie moved to third. Chloe Wigington then laid down an excellent bunt, and when Regina elected to throw her out at first, Ellie beat the throw back home in a cloud of dust (at least according to the rather eccentric home plate umpire, though the Regina coach rather vehemently disagreed).

With Carling Hare now on third, could GB win the game? The answer was no, not yet, as Vicky Keswick went down swinging. 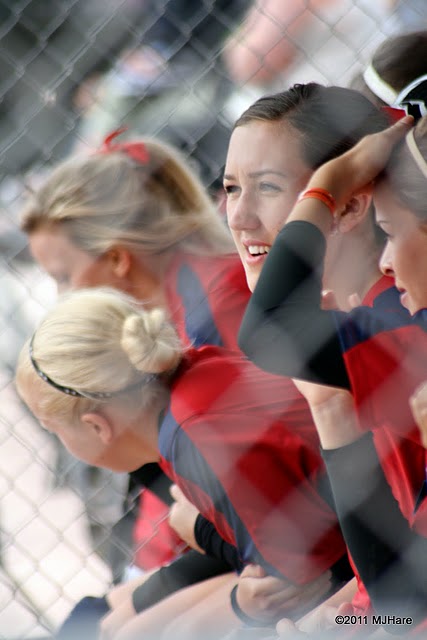 Extra innings in international softball means the tiebreak is used: each team starts with the last batter from the previous inning on second base and the trick is to get that runner to third and then home with the three outs available. Scoring at least that runner is usually mandatory if you want to stay in the game, especially for the visiting team. Score more than once in the top of a tiebreak inning, and you usually win.

So Regina started with Ellen Kirkness on second base and she moved to third when Carmen Hughes bounced back to the pitcher. The key for GB was that Kirkness stayed there when Lorissa Thompson hit a bouncer to GB third base player Amy Trask and she checked the runner before throwing to first.

But the throw back to home to make sure the runner stayed on third got away from catcher Nicole Ratel. Kirkness broke for the plate, Nicole dived to retrieve the ball and flipped it to pitcher Ellie Pamenter. A cloud of dust, a tag, and the same eccentric umpire called "Out!"

A reprieved GB now had a chance to win the game, and they did. Vicky Keswick started as the tiebreak runner on second, and Lauren Bromage singled Vicky to third, then stole second. Amy Wells then hit an infield ground ball and the Gold preferred to let her reach first rather than make the play and risk Vicky scoring. So GB had the bases loaded and no one out.

The strategy worked for Regina when Amy Trask hit a sharp ground ball to first and Vicky was out at the plate on a force play. But to the ecstatic cheers of the many GB parents and relatives here for the tournament, Nicole Ratel blooped a single into short left field, driving in Lauren Bromage for the winning run and Nicole's fifth RBI of the game.

In a game that both teams tried to give to the other (Regina had only three earned runs out of eight and GB five earned runs out of nine), GB somehow prevailed and pitcher Ellie Pamenter, who had gutted her way through the full seven innings, got the win. GB were certainly happy to take it.

Could the GB Juniors now win two games in a row when they were back on the diamond at Softball City a few hours later to play the Kelowna Heat?

They could have -- but errors struck again and they didn't.

Another first inning meant that, inevitably, GB was giving up yet more runs.

Kelowna had runners on second and third and two out when GB pitcher Carling Hare got Tori Turton to hit a bouncer towards third base. But the play wasn't made and two runs scored.

By contrast, the next three innings featured errorless softball and excellent pitching by Carling and Kelowna starter Rachel Penner, so the score was still 2-0 going into the top of the fifth.

GB had had only one hit to that point, but suddenly everything changed. Lauren Bromage singled up the middle to start the inning and moved to second when Amy Wells grounded out. Nicole Ratel doubled to right-centre to score Lauren, Carling Hare singled, and the Heat changed pitchers. That didn't help. Sara Robb's single brought in Nicole, Carling scored when the Heat failed to throw out Chloe Wigington on a grounder to third and Kelowna brought in Jamie Bassett, their third pitcher of the inning. But she couldn't stop Sara scoring on a groundout by Saskia Johnston.

Suddenly, GB had a 4-2 lead with just three Kelowna at-bats to go, and visions of a doubleheader win danced in their heads.

But the next two innings turned into a nightmare. 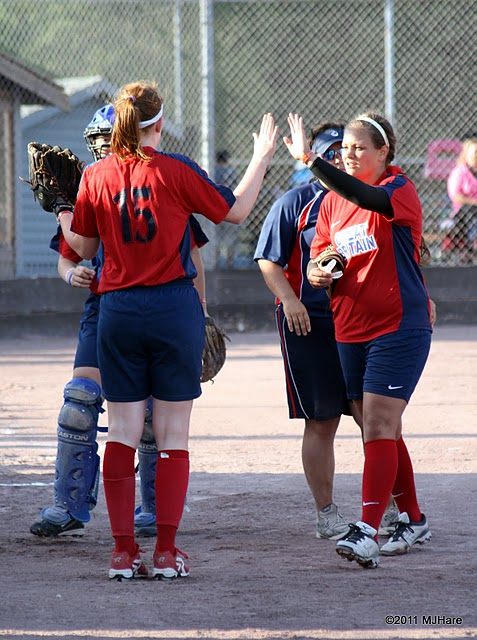 Kelowna were handed four unearned runs in the bottom of the fifth after they had two outs and just one runner on base. A four-pitch walk added a second runner and then came the key play of the game. Kelowna clean-up hitter Morgan Cedarholme lifted a fly ball into short centre field. While outfielders hesitated, GB shortstop Amy Wells made a despairing try but the ball ticked off the end of her glove and both runners scored to tie the game. Three consecutive hits followed and GB's 4-2 lead had become a 6-4 deficit and heads went down with it.

GB went up and down in order in the sixth and seventh innings, and Kelowna tacked on three more runs in the bottom of the sixth while GB committed two more errors.

The outcome was tough on Carling Hare, who went the full seven innings for GB and pitched a fine game that she could have won. But while GB have played excellent defense at times in Canada, they haven't done so consistently, and have paid the price.

Two more games today will decide whether GB end up in the Playoffs or the Consolation Round.