As a result of growing interest in watching top-class softball in Europe, the European Softball Federation decided last year to film and web-stream games from some of its top fastpitch competitions. 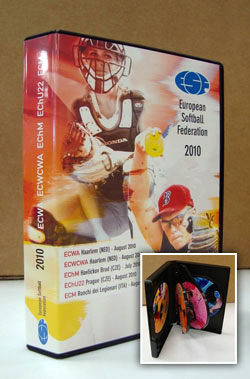 Now the ESF is offering a box set of five DVDs with the Championship games from five different 2010 European tournaments:

This five-DVD box set is now available from the ESF for the very reasonable price of 16 euros plus nine euros for packaging and posting to anywhere in Europe.

The DVDs feature some exciting and highly-skilled softball action, including one unbelievable last-inning comeback that turned a title game on its head.

To order, please email ESF Assistant General Secretary .(JavaScript must be enabled to view this email address) on before May 20.