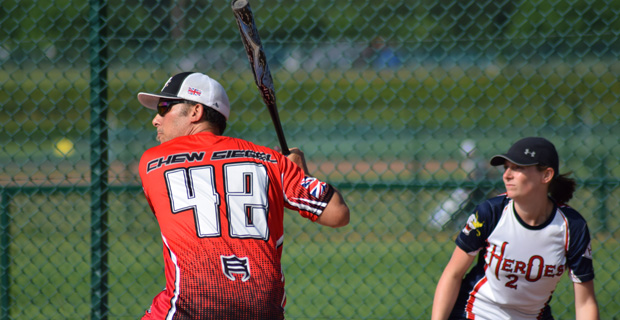 Co-ed slowpitch softball is the most popular and easily accessible format of baseball and softball that exists today in the UK.  It's a lot like baseball in terms of the rules, but because the ball is pitched slowly to each batter (as the name implies!), it's easy to hit the ball and get involved in the game.

Slowpitch is a game that's easy to pick up and accommodates mixed abilities, with both experienced players and novices able to play on the same team.  Teams are mixed-gender and slowpitch is a popular sport among players from the LGBTQ+ community.  All this gives the sport a great buzz, and most softball games are followed by social sessions at the local pub!

Slowpitch is played both recreationally and competitively in summer leagues after work, in winter indoor leagues and during summer weekend tournaments across the country, including at the Farnham Park Baseball and Softball Complex, the UK’s only national facility, operated by BaseballSoftballUK.  There are over 20 leagues and hundreds of teams set up across the country with thousands of players in London alone.

In addition to co-ed (mixed-gender) slowpitch softball, there are also single-sex men's and women's slowpitch teams that form, usually from players on existing co-ed teams, to play in a number of local and national tournaments during the season.

Use the BaseballSoftballUK Team Finder to check out teams, clubs and leagues in your area.

In a normal season, many slowpitch leagues around the country hold open "try-it" sessions and training sessions during the winter months to help new players get into the game and existing players develop their skills.  During the playing season, many leagues run coaching sessions for beginners.

It's not clear yet what will be possible in 2021 given the Covid-19 pandemic, but as opportunities for new and beginning players arise, they'll be listed on this page.

Go to Get Involved menu