The National Softball League, the UK’s top slowpitch softball competition, got back on the diamond after almost two years away on 5-6 June at Farnham Park with a weekend of NSL2 play

alongside the first Diamond Series tournament of the season, and Tempest have taken an early lead in the race to qualify for the NSL2 Nationals.

LNZ, who were an NSL1 team back in 2019, are one of three teams that had 4-2 records over the weekend – the others are The Mob and Fuzzy Ducks.

Both the Spittin’ Camels and the Fuzzy Ducks were promoted to NSL2 via the NSL3 Nationals back in 2019.

Eight of the 12 teams in the standings below will qualify for NSL2 Nationals in September. 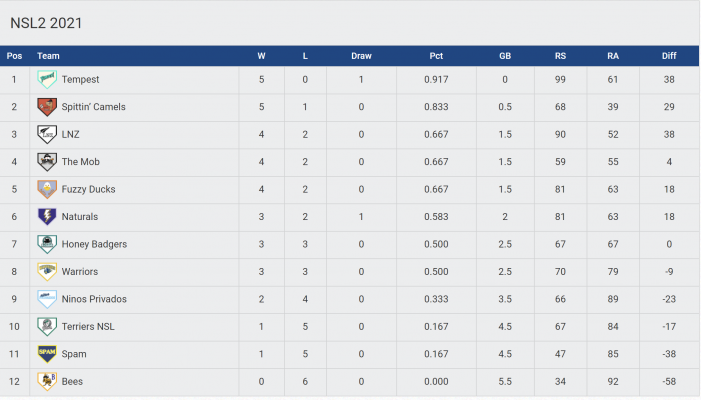 Although softball is now in full swing in 2021 as the pandemic – hopefully – continues to recede, Covid is still having its effect on the 2021 schedule.

For the NSL, the main effect has been to reduce league competition to two weekends rather than three.

NSL2 teams will have their second and final weekend of play alongside the Diamond Series tournament on 17-18 July at Farnham Park.

Meanwhile, the 12 teams in NSL1 will play out their league season as part of the Windsor Tournament on 10-11 July and then at a standalone weekend of play on 14-15 August, with both events at Farnham Park.

The shortened season means that teams have less time and fewer games in which to make up lost ground and make sure of a Top-8 place that will guarantee qualification for Nationals.

Another effect of the shortened NSL season has been seen in the schedule.  Instead of all teams in NSL2 and NSL1 playing each other twice over three weekends in games of an hour or less, this year teams will play each other once over two weekends, but with games up to 90 minutes in length.

So teams will be playing fewer but longer games, with more chance that games can be played out over a full seven innings.

Statistics from the first weekend of NSL2 play show this effect clearly.

At the NSL2 Nationals back in 2019, out of 28 games played in one-hour game slots, one game finished after three innings, 18 games achieved four innings, eight games reached five innings and only one game had six innings.  The average game lasted 4.3 innings.

While teams will obviously want to play more games over the course of an NSL season than we are seeing in 2021, this year’s schedule will set up an interesting discussion around the optimum number and length of games.