This year’s Manchester Tournament was played at Parrs Wood School in Didsbury on the weekend of 31 July-1 August with the usual mix of rain and sunshine but nothing like the torrential downpours the tournament has had previously.

Both the Silver and Bronze divisions had eight teams that all played each other in an initial round-robin and then were split into Plate and Cup groups for semi-finals and final.

The Gold Cup was played by the top four teams from Groups A and B in a double elimination system expertly designed by Roger Grooms.

Thunder III did, however, have Ralph to support them. 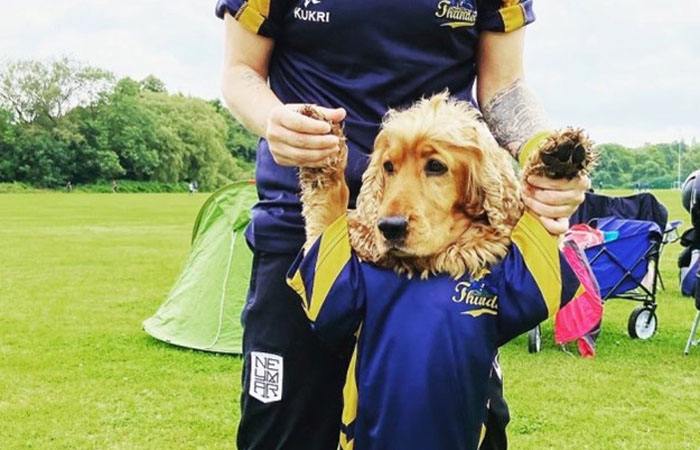 Ralph wasn’t at his most inspiring on Saturday, as Thunder III finished the day with only one win and a tie, while the Sombreros set the early pace with four wins out of four and were followed closely by the two Yorkshire teams: Dales with three wins and a tie just ahead of the Bobcats with three wins and two defeats.

On Sunday, however, Ralph came into his own, inspiring Thunder III to an 8-8 tie with the Sombreros before they beat the Seagulls and then the Enforcers to claim the fourth and last place in the Cup semi-finals, behind the Dales, Sombreros, and Bobcats.

The Dales beat the Sombreros, who had a more difficult day on Sunday, to finish top of the standings and earn home team advantage for the semi-finals.

The Enforcers beat the Seagulls in the first Plate semi-final to claim home advantage in the final. They were joined by the Stingers, who avenged a recent defeat by the Rippers in the second Plate semi-final and came to the final knowing they had beaten their opponents in the very first game on Saturday.

In a game that was just as close as the previous meeting, the result was the same – a victory for the Stingers by two runs, and their first-ever trophy.

In the Cup, the semi-finals went the same way as previous meetings in the group stages, with the Dales seeing off Thunder III and the Sombreros beating the Bobcats, although the Dales had home advantage.

Nevertheless, it was the Sombreros who brought gold to their bats in the final, beating the Dales 21-7. 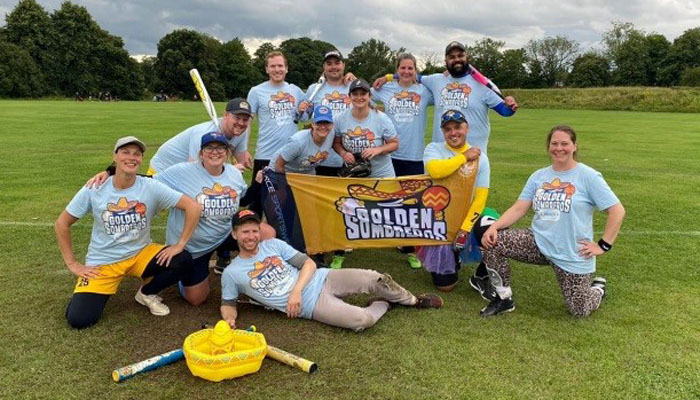 The eight teams competing at Silver level were the Didsbury Bats, Marauders, Camels II, Speeders, Tigers and Los Bandidos (all from Manchester) plus the Sefton Sharks and Famille Casling, who are apparently from an Alpine village although it’s not clear which one.

After Saturday’s games things were very close at the top of the group, with the Sharks, Bandidos and Famille Casling all with four wins and one defeat.  La Famille had beaten the Bandidos in the final game on Saturday, but other games between these three had yet to be played, which meant that Sunday morning’s games would be vital in deciding the placings at this level.

The Speeders finished Saturday in fourth, just above the Tigers on head-to-head but having played one fewer game. 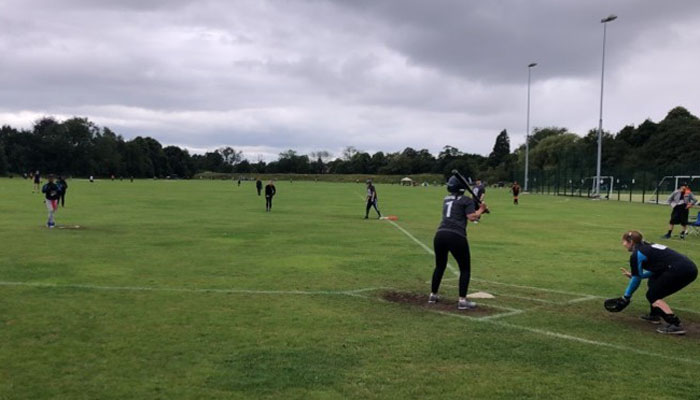 On Sunday morning, the Sharks lost to Famille Casling but then beat Los Bandidos, who also lost to the Tigers, but the top four were shaken up by the Speeders who won all three of their games and finished top of the table on head-to-head over Famille Casling and the Sharks through a combination of wins and runs conceded.  Confused…?

Los Bandidos took fourth place to set up a Cup semi-final against the top-placed Speeders.

In the Plate, the Marauders were unable to beat the Tigers in their semi-final and record their second victory despite a phenomenal diving catch from their shortstop who ran a long way back and to his right and wasn’t even facing the ball when he landed with it in his glove.

In the other Platte semi-final, eighth-placed Camels II upset the fourth-placed Bats 9-2 to secure their place in the final against the Tigers. But the Tigers were too strong for Camels II and prevailed by 22-9. 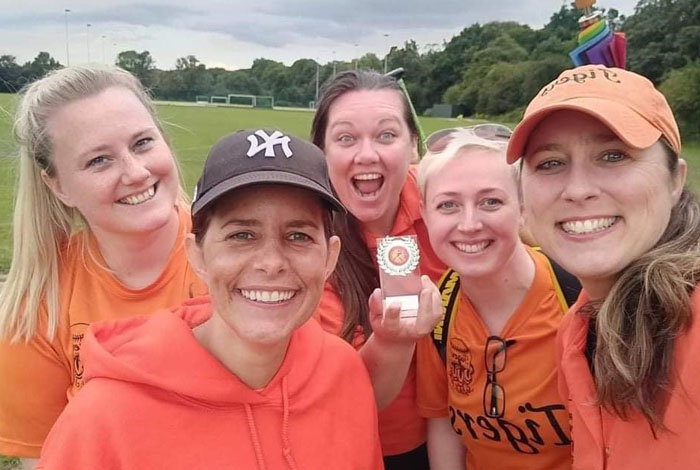 In the Cup, the resurgent Speeders defeated Los Bandidos in the first semi-final to confirm their home advantage in the final and then La Famille joined them by beating the Sefton Sharks in the second semi-final.

The final turned out to be quite a game, with the Speeders triumphant by 22-20 over les Alpes’ finest. 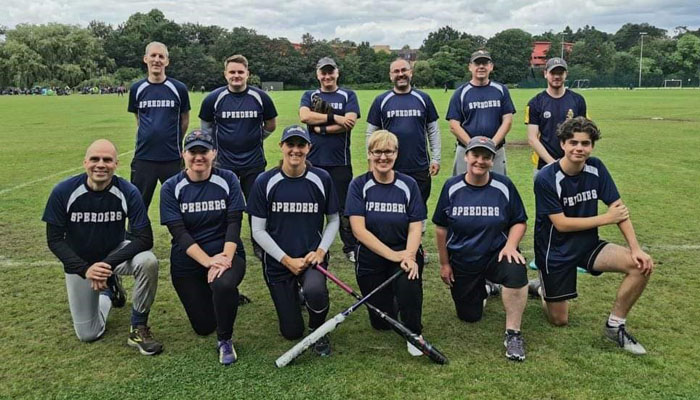 After Saturday’s games both Thunder and the Meddling Kids were top of their group, having won all of their games, with the Legends and Coos just behind them.

It was a little more straightforward in Group B, as the Hairy Coos had already beaten the Greensox so the result of the Greensox v Camels game on Sunday could not affect the top of the table. 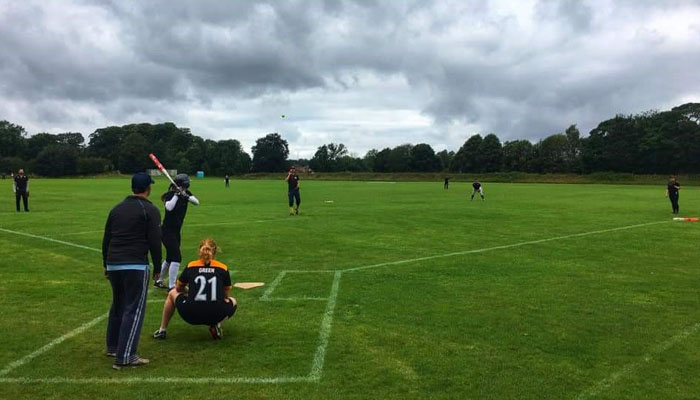 Meanwhile, the other eight teams took part in a double elimination round to decide the Cup winners.

This went according to the previous group standings until the Meddling Kids beat Thunder at 11:00 am to progress undefeated while Thunder then had to play four games in a row (the curse of double elimination!) to reach the Cup final.

Since the Thunder v Legends game had gone to an extra inning, the final started late and perhaps the extra recovery time (or maybe just Matt Tomlin realising that he plays better when he’s not wearing a skirt) did the trick for the Kids as they triumphed 16-13 in the final.

Or maybe it was Nova as the lucky charm…. 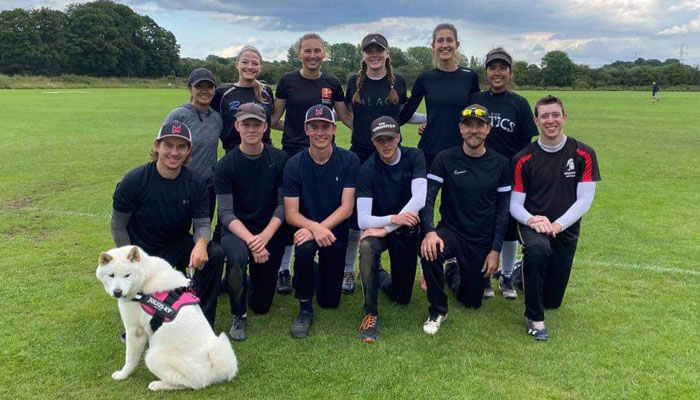