National Softball League 1 teams, the top co-ed slowpitch teams in the country, got back on the diamond for league play for the first time in almost two years on 10-11 July at Farnham Park, and when the weekend was over, three familiar names were at the top of the table.

The first NSL1 weekend of the season was played, for the second time, as part of the annual Windsor Invitational Tournament, and those familiar names holding down the top three places in the table on Sunday evening were the Pioneers in first, H2O in second and the Chromies in third. 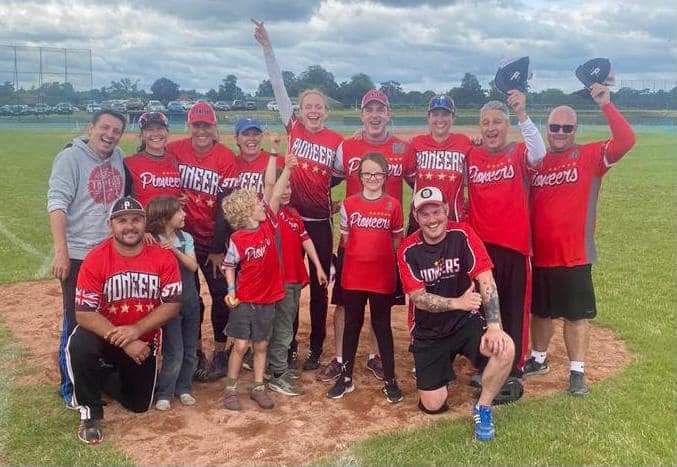 H2O, in fact, were the only undefeated team over the weekend, but they drew twice – against Blue Steel and Blitz Bombers – while Pioneers and Chromies both went 5-1, with the Pioneers

holding the edge after this first weekend on runs conceded.

The Pioneers suffered their one loss by 14-10 to Legends, who are fifth in the table, while the Chromies went down 15-13 to the Travelling Dodgers, who are seventh.

None of the three top teams played each other in a league game over the weekend -- that will come on the second NSL weekend in August.

However, they did get a taste of hand-to-hand combat during the Windsor Tournament Gold Playoffs.  These games don’t count in the NSL standings, but H2O beat the Chromies by 19-10 in one semi-final, then lost 17-14 to the Pioneers in the final.

Meanwhile, the 2019 defending National Champion Knights, unable to access their star German players because of Covid travel restrictions, finished the weekend in 11th place with just one win, and that came at the expense of the last place and winless Mavericks.

With just one more weekend of play to come in this pandemic-shortened season – a standalone NSL1 weekend on 14-15 August at Farnham Park -- the Knights may well struggle to finish in the top eight places and qualify for the NSL Nationals in September.

The team that’s new to NSL1 in 2021, having come up by promotion from NSL2 after the 2019 season, is just about holding its own.  The Blitz Bombers managed a win and a draw on the weekend and are currently tenth, but just a game behind eighth spot and a Nationals place.

But the KKs, who came up to NSL1 after the 2018 season, are flourishing in only their second year in the league.  They had four wins over the weekend and are currently in fourth place, just a game behind the top three.

The other feature of the weekend, following a decision taken at the 2020 BSF AGM, was that all NSL1 games over the weekend were played using the “1-and-1 count with 1 to waste” system.

The benefit of this system is meant to be that at-bats will be shorter and teams will play more innings over the course of a timed game, and the returns following the experiment seem to bear this out.

In the 2019 NSL1 Nationals, where teams played one-hour games with a full count, the average game length was 4.32 innings, with the majority of games played over four innings.

During NSL1 play on 10-11 July, again with one-hour games but with the new system in operation, the average game length was 5.27 innings, with all but four games lasting either five or six innings.

This will no doubt give the BSF Executive some food for thought during the off-season!

Below are the NSL1 standings after the Windsor Tournament.

Can any of the teams currently occupying the bottom four places make it into the top eight on the August weekend and book their ticket to the Nationals?

Which of the triumvirate at the top will win the league – and can anyone else, such as the surprising KKs, sneak into a top three spot?

All will be revealed – weather permitting -- in August! 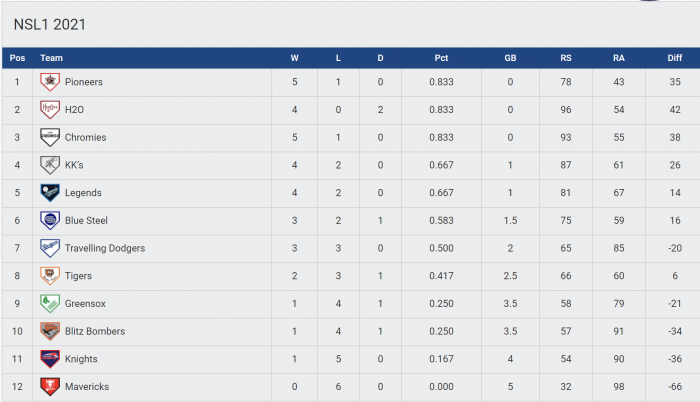