After over a year of waiting, the softball season in the Windsor and Maidenhead Softball League got underway on Saturday 17 April at Farnham Park with the league’s annual curtain-raising First Ball event, played on a day that felt warm in the sunshine, but with a cool wind.

The day marked the first open tournament at of the season at Farnham Park and the reopening of catering at the Home Plate clubhouse.

And the top prize in the competition -- the Cup trophy -- went to a visiting team from the Midlands, the MK Diamonds, seen below showing off their trophy at a distance! 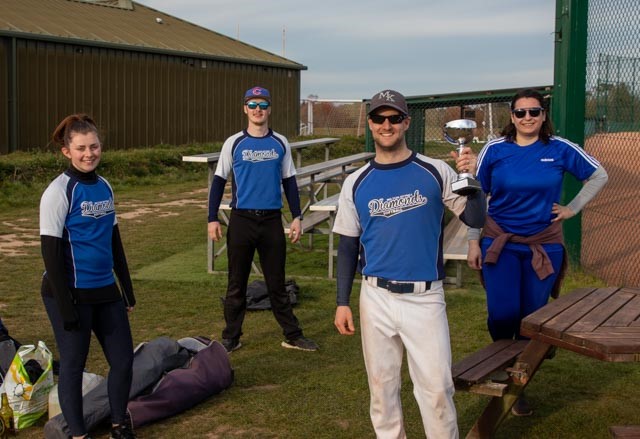 Twelve teams lined up in a three-group format, which meant that any rust from inactivity would need to be cleared quickly if a team had trophy ambitions.

What was clear from the early games was that hitting had not suffered from lockdown: first-round games in two of the three groups had teams scoring in double figures and it was not long before the group that started with a couple of tight games joined the party.

After two rounds of games, every group had a “winner take all” game going into the final round.

In the Blue Group, the Maidenhead Rebels and BA were level on points and separated by five runs.  This was the game that would settle the runner-up spot in the Cup competition behind the MK Diamonds, who had established a clear lead thanks to their impressive scoring power.  The place went to BA, who again posted double-digit runs.

The Red Group had three teams all able to make the Cup, with only the Rattlesnakes not in contention.  The TV Hurricanes wound up topping that group thanks to a win over the RG Blue Sox and a draw earlier in the competition.

The Green Group also had three teams in contention for a Cup place, with the Maidenhead Royals in pole position with two wins.  The Royals finished the job with a narrow one-run win over the Blue Jays.

The two Cup semi-finals were tight affairs, as the Hurricanes overcame BA and the MK Diamonds had to come from a 6-0 deficit in the final inning and then play two extra innings to overcome the Royals by a score of 9-8.

The Plate competition semi-finals were both settled by two runs, the Blue Sox beating the Rebels 8-6 and Bracknell Red beating the RG Blue Jays 9-7 to prevent a Blue Sox v Blue Jays final.

The Spoon semi-finals produced a combined 56 runs as Bracknell Yellow beat the Wildcats 17-13 while the Rattlesnakes defeated TV Typhoons 17-9.

The finals were a mixed bag.

The MK Diamonds, who had been dominant all day with only the Royals coming close to shutting them down, cruised to victory over the TV Hurricanes in the Cup final.

And it was double disappointment for Bracknell as their Red and Yellow teams lost the Plate and Spoon finals respectively: the Blue Sox picked up the Plate trophy and the Rattlesnakes claimed the Spoon.

It was a fantastic day as softball returned to the WMSL and everyone adapted to the “Return to Play” guidelines as if they were the norm.  It was good to be back!