"To be honest," said one of the GB Slowpitch Team coaches, "about two-thirds of the team that will go to the European Slowpitch Championships in Bulgaria this summer probably picks itself. But the other places -- well, they're certainly up for grabs!"

"It's been a filtering process for the last nine months through our trials and training sessions," said Head Coach Jeremy Bedford, "and there has certainly been some movement. Some players have moved up and others have moved down. But now it's time for all the players to show us what they can do when the pressure's on."

So it was that seven GB Slowpitch Team coaches and 37 players from the GB Main and Development Squads assembled at the Civil Service Sports Ground in Chiswick on Saturday, May 7 -- where the forecast rain stayed away -- to play in the GB Challenge Tournament, the last chance to impress the coaches before the 18 players who will go to the 8th European Slowpitch Championships in Dupnitsa, Bulgaria this summer will be selected.

Three Development Squad members weren't able to be there on the day, but they have been assured that their performances at training will be taken into account when final selections are made.

"We have a lot of good players in our programme," Jeremy Bedford said, "and I think the quality of the Development Squad is higher than it was last year. But now it's time to skim the cream from the top." 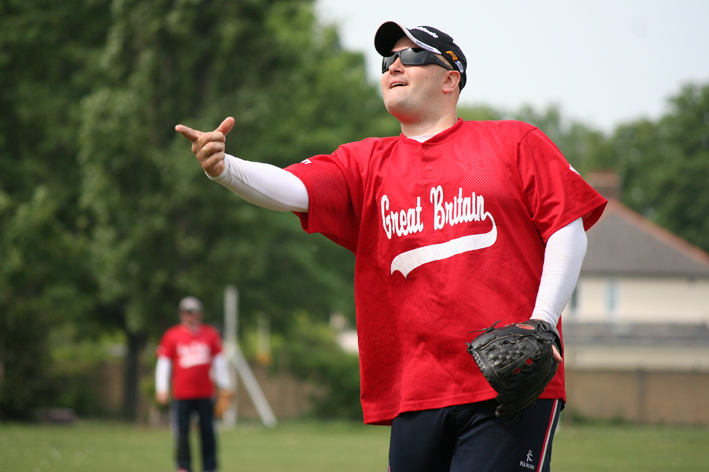 The GB Challenge Tournament, initiated in 2010 by former GB Slowpitch Head Coach Mark Saunders, was played this year as a five-team tournament.

The GB Main and Development Squads were divided into three teams -- GB Red, GB White and GB Blue -- and they were joined on the day by the National Champion Pioneers (minus their GB players) and by a pick-up team called The Scourge, made up mainly of GB fastpitch players and coaches.

All of the teams played each other and then the top two teams in the round-robin standings contested the Final.

No one cared very much about the results, but performance certainly mattered -- especially for Development Squad players and some of the Main Squad players who might feel that their places aren't quite so secure.

A few good hits could stand them in good stead with the watching coaches, but commit a couple of errors and fear gnawed the soul.

There were plenty of both hits and errors on the day, including from some of the Main Squad players whose places were theoretically pretty safe.

At the end of the round-robin, the standings looked like this:

Because GB White had edged out a 7-4 win over GB Blue in their head-to-head meeting in the round-robin, it was GB White who got to challenge the hitherto undefeated GB Red in the Final.

And the fact that these two teams had made it through was perhaps not surprising. Although the stated intention of the GB coaches had been divide players between the Red, White and Blue teams as evenly as possible at the start of play, 14 of the 18 Main Squad players were involved in the Final, leaving the impression that GB Blue had perhaps gotten the short end of the straw.

When GB Red and GB White had met in the round-robin earlier in the day, GB Red had coasted to a 14-9 win. The Red team had Britain's #1 pitcher Dan Spinks, Main Squad infielders Steve Hazard, Robbie Robison and Emily Clifford and outfielders Martin Cartledge and Fiona Hunter.

But in the Final, it was GB White who came out with all guns blazing, building an ever-increasing lead and then blowing the game open with six runs in the top of the seventh inning to run out 16-5 winners. GB White had pitcher Roger Grooms as well as Main Squad infielders Steve Rice, Ben March, Steph Jardine and Vicky Chapman and outfielders Brett Gibbens, Ruth Macintosh and Martin Digon.

Embarrassingly, GB Red committed 12 errors during the game, including five in that nightmare top of the seventh. A sharp-fielding GB White team, in stark contrast to their performance at the beginning of the day, committed only three.

The batting stars for GB White were Brett Gibbens with a pair of doubles and a single, Rogers Grooms with a home run and Ben March and Kirstie Leach with two hits each.

Now the players can only wait and hope. Only 18 of the 40 can be chosen to play in the European Championships in Bulgaria in July -- and there could be even more at stake.

Those players selected for Bulgaria will certainly have a leg up on selection for the 3rd Slowpitch World Cup that the International Softball Federation is committed to hosting in January 2012 in Plant City, Florida.

Watch for the selection announcement on this website shortly.