Head Coach Stan Doney (pictured far right below) reports on the final games for the GB Junior Men's Fastpitch Team at the European Junior Championships in Kostelec nad Orlici in the Czech Republic. 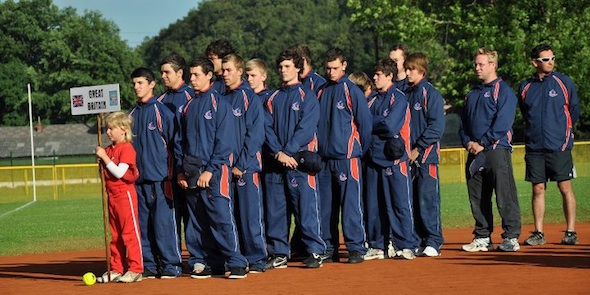 Our game against Israel was a true reflection of the bottom three squads at the European Junior Men's Championships. Croatia, Israel and Great Britain were all evenly matched, and this was probably the most enjoyable game of the tournament even though we lost.

Thomas Priscott pitched a full seven innings for the first time and it was the first game that did not end up with the mercy rule applied (either for or against us).

Josh Peat had a chance to become the top batter of the tournament if he could manage to go 2-for-2 or 3-for-3 in this game. He came in to the game batting .600, quite an awesome feat considering seven of our 12 players did not have a batting average after the second day! Josh went 0-for-2 against the Israelis, so the batting title was out of reach, but he still managed to bat .500 for the tournament and was GB’s best hitter.

The 3v4 Page Playoff game was always oing to be interesting. Croatia had beaten GB by the mercy rule in the first round-robin game, and we "mercied" them back in Round Two. The Croatians had been training for ten months for this moment, while the GB Junior Men's Fastpitch Team had played about 20 games in its entire history.

The line score below tells the story:

Add to this the three walks they gave us to the eight we gave them, and it was always going to be an uphill battle.

The truth was that the Croatians were more experienced in every department and had a deeper batting lineup than ours. Josh Peat and Carl Sharpe, both from Nottingham, batted .500 for the tournament, but after that it was quite a steep decline in terms of averages. Dexter Stewart had two RBIs in this game with a single to centre field, but that was it for the GB team.

As Croatia celebrated (they are now entitled to go to the World Championships in Argentina next year), I explained to the boys they have worked hard to get to this point and it is up to the eight returning players to decide if they will put in the work necessary to achieve similar heights in 2013.

Where to from here? 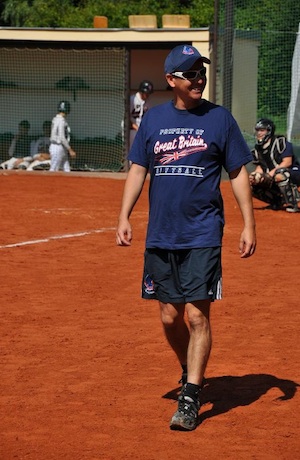 The GB Under-19 Men have gained the respect of their opponents despite the reputation that Britain seems to carry as a “slowpitch only” softball nation.  We weren’t expected to win a game and instead we were only a few bad errors and key plays away from playing for second place.

Pitching was a huge problem for us in the tournament. Tom Priscott, Josh Peat, Travis Brown and Carl Sharpe all did a great job in terms of their commitment and never giving up, but at the end of the day the stats do tell a story, and here is the biggest one of them all:

This amounts to 48 extra bases we gave away, many of which were converted into doubles due to runners stealing. That is almost 10 walks per game.  Obviously, the focus in our winter Academy sessions will be on pitching and catching.

We outhit Croatia and Israel 39 to 28. We were just as good as the other teams in many parts of our game, and even Denmark was concerned we might steal a win when we were 6-4 up going in to the fifth inning of play.

One of the most satisfying moments for me was seeing four Danish boys I used to coach from 2003-2006 in the Danish National Team. I had not seen them since they were 13 or 14 years old and now they were all bigger and taller than me (not hard, I know). Even more satisfying was seeing Jacob Mortensen and Benjamin Gorlen’s parents, the former Presidents of my old Danish softball club. They thanked me for making their sons the players they are today, which is always nice reassurance for a coach, and Jacob reinforced this in abundance as he smacked three home runs over the fence during the tournament and made some great plays at shortstop.

I have told the GB Juniors that, if they give me two years of their time, it is not too late to help them to play like Jacob, although they have a lot of work to do.