Taking on a strong California team (as a hotbed of fastpitch softball, California produces some of the best youth teams in America), the GB Juniors out-hit their opponents, committed only one more error, but still lost 9-3.

The game proved a number of things: that the GB Juniors are going to be able to hold their own in this tournament, that walks can make your life difficult and that there's no substitute for the clutch hit with runners on base. GB had only one of those and left eight runners stranded, while the California Aces 92 had a couple of two-run triples in key situations. 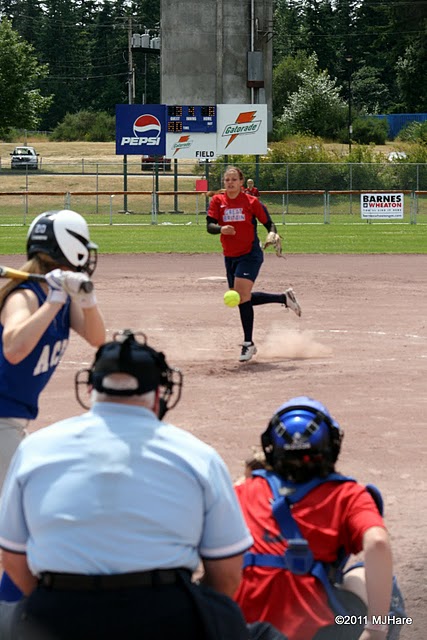 In two of the three scrimmage games they played before the tournament began, GB gave up a bunch of first inning runs, and it's always an uphill struggle in fastpitch softball when that happens. They did it again yesterday, and were chasing the game from that point onwards.

California Aces leadoff hitter Lisa Columbo swung at the first pitch she saw from GB starter Carling Hare in the bottom of the first inning and topped the ball a few feet in front of the plate --just far enough to let her reach first by the time catcher Nicole Ratel could pick it up and make the throw. It was not a good omen.

Kiana Aguilar walked, Morgan Giusti ripped a single to right field, and the ball skipped through to the fence, with two runs scoring. Grace Hargadon also walked and things were looking grim. But Carling Hare steadied the ship, striking out Pati Monterrey and holding the runners before throwing out Amber Zamlich on a bunt. GB were on the verge of getting out of the inning with minimal damage.

But Amanda Delfino hit a hard line drive to right field that might have been better played and came all the way around to score when the throw missed the cutoff. Suddenly, two runs had become five and GB were looking a mercy rule loss in the face. Was this what the tournament was going to be like?

To their very great credit, the rest of the game was completely different. Over the last six innings, GB scored three runs and the Aces four. GB had nine hits to four for the Aces. GB did not commit another error; the Aces had one.

In other words, the last six innings were a closely-fought game between two evenly matched teams, and that is hugely encouraging for the GB Juniors. Unfortunately, softball games are seven innings long!

GB's three runs all came in the fourth inning, by which time the Aces were leading 6-0, and they came on a five-hit outburst off California pitcher Kelsey Shain. Ellie Pamenter opened the inning with a single to left field, Saskia Johnston beat out an infield hit and then second base player Sara Robb launched a double over the head of rightfielder Alyssa Parra, driving both runs home. Amy Wells had a tremendous at-bat, fouling off several two-strike pitches before singling to left field, moving Sara to third, and a single up the middle by Lauren Bromage drove Sara home for the third run.

At 6-3, GB was back in the game, but the Aces immediately restored their six-run lead with three runs in the bottom of the fourth. The key blow was a two-run triple to right-centre field by Grace Hargadon.

After that, the realistic goal for Britain was to avoid the mercy-rule loss that would have occurred if the six-run lead had become seven, and that goal at least was accomplished as neither side scored for the remainder of the game.

GB left two runners on base in the fifth inning after Amy Trask hit a hard ground ball that ate up the Aces shortstop and Carling Hare walked, but none of the next three batters could bring them home, even after Amy and Carling pulled off a double steal.

Amy Trask lined a double up the alley in right-centre field with one out in the top of the seventh, but again was unable to advance.

So the opening game, against a team rated as one of the best in the pool, had lots of encouragement to offer the GB Juniors. But a loss is still a loss. 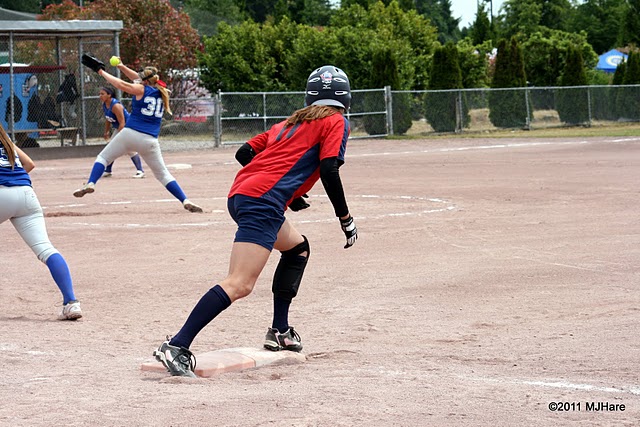 Now the schedule gets busy. Today (July 12), GB will play the Regina Gold at 1.00 pm and then come back to Softball City to play the Kelowna Heat at 6.30. Regina Gold did not play yesterday, but Kelowna Heat were involved in a strange game that must have been more like slowpitch, going down 18-17 to the Calgary Kodiaks.

On Wednesday, GB will have two more games -- against those same Calgary Kodiaks at 10.30 am and then against Fraser Valley Fusion 94 at 3.30 pm.

A game against Surrey Storm 93 at 3.30 pm on Thursday will conclude the round-robin phase of the tournament.

In their last scrimmage game on Sunday and the opening game of the tournament yesterday, the GB Juniors showed that they are not out of place at this level.

Now it's about picking up some wins.