Vancouver, Canada: July 13 -- After playing five of their six pool games at the 2011 Canadian Open Fastpitch Futures Gold Tournament, the GB Junior Women's Fastpitch Team has proved conclusively that it can compete on level terms with the teams in this competition. That certainly wasn't a given coming in, and it's encouraging with regard to the long-term goal, which is success at next summer's European Junior Championships.

On the other hand, GB's record currently stands at 1-4, which will condemn the team to the Consolation Round after tomorrow's final group game. But with a bit more luck, experience, ruthlessness and maybe a few more clutch base hits, the team could easily be 4-1. 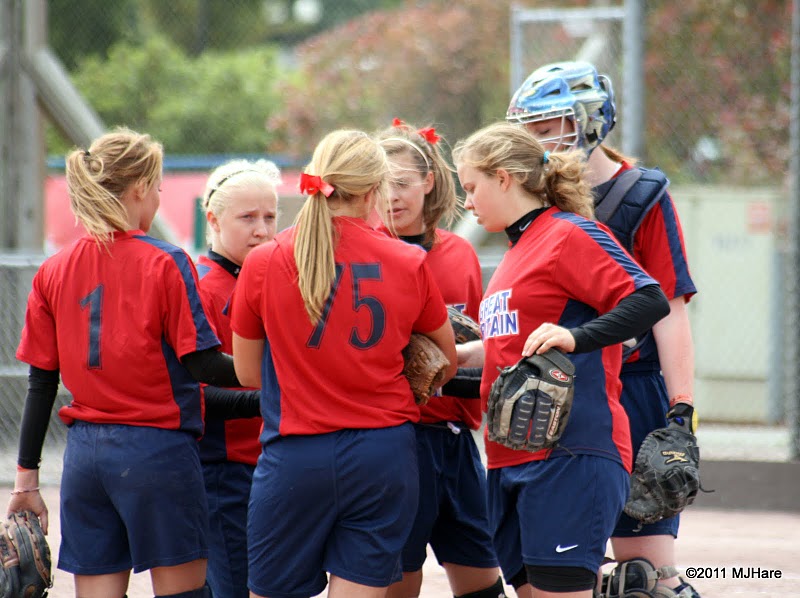 Today's two games, against the Calgary Kodiaks at 10.30 am and Fraser Valley Fusion 94 at 3.30 pm at Cloverdale Athletic Park, were a case in point.

In the morning game, GB pitcher Ellie Pamenter threw a gem and the Calgary Kodiaks scored only in the fourth inning. Unfortunately, with the aid of a GB error, they scored three runs in that inning, whereas GB could only score single runs in the second and sixth but left nine runners stranded on base to four for Calgary. The result was a 3-2 defeat in a well-played game by both teams. GB committed only the one error (a welcome change) and looked sharp and efficient on defense. It could and should have been a GB win, but instead was another loss.

In the afternoon game, GB outhit their opponents 11-9 (there has been no lack of hitting by the GB Juniors in this tournament and no lack of baserunners), but left 11 runners on base and so went down 8-4 to Fraser Valley Fusion, who committed no errors while GB had three, enough to give the Fusion four unearned runs.

And another potential win became a loss.

Hopefully, the experience gained here will help these kinds of games wind up in the win column for GB at the European Championships next summer in Belgium. But for now, the GB Team hasn't cracked this particular problem. 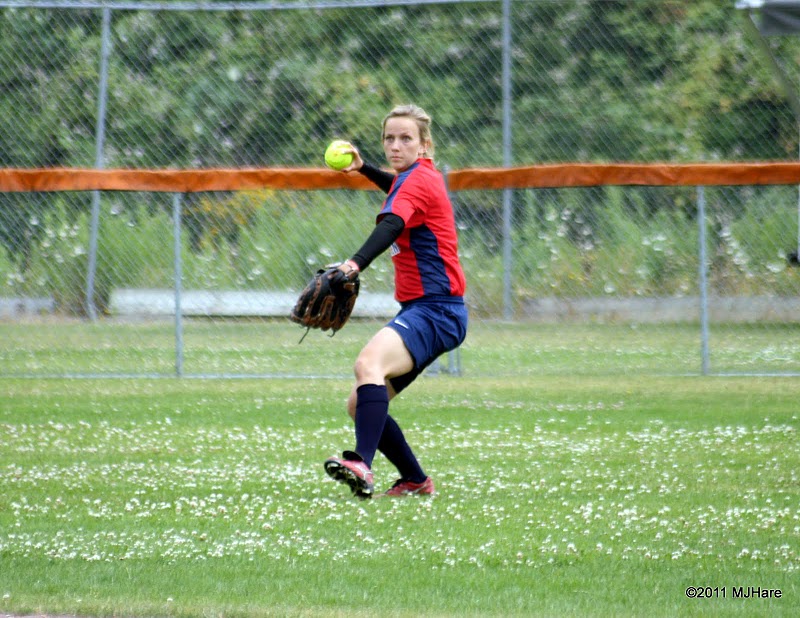 This was an excellent game between two teams playing tight and attractive softball. For Britain, Ellie Pamenter pitched a seven-hitter, didn't walk a batter and set down the Kodiaks without problems in six of the seven innings.

GB had far more baserunners, and took the lead in the bottom of the second inning. Nicole Ratel led off with a ringing double to left field, went to third on Amy Trask's groundout, and scored on another infield out by Sara Robb.

But the Kodiaks scored all three of their runs and took what proved to be the winning lead in the top of the fourth with the help of an error and a terrible call by the field umpire.

Calgary leadoff hitter Cassie Stinson is exceptionally quick, and when she bounced back to pitcher Ellie Pamenter, Ellie felt compelled to throw to first before second base player Sara Robb could reach the bag and Stinson was safe on the error. Marissa Worthington then singled her to second. Katlyn Hurlbert then bounced to shortstop Amy Wells, who threw to Amy Trask at third for the force out. There was only one person in the ballpark who didn't think it was a force out, but that was the field umpire. Inexplicably, he called Stinson safe at third, and Calgary had the bases loaded with no one out.

Later, the home plate umpire told GB Head Coach Hayley Scott that he would have given the out if it had been his call -- which raises the interesting question of why he let his colleague's call stand. But among many umpires, saving their colleagues' face is still more important than getting the call right.

So bases loaded, no one out, and the inevitable happened. Kodiak clean-up hitter Kirsten Nelson drove a triple to the fence in left-centre field and all three runners scored, including the reprieved Stinson.

Ellie Pamenter did well to get out of the inning while keeping Nelson at third, on two groundouts to first base and a pop fly to second. But Calgary now had a 3-1 lead.

GB then proceeded to leave the bases loaded in the bottom of the fourth and left two more runners stranded in the sixth -- though they did score a run to cut the lead to 3-2. Nicole Ratel singled to lead off the inning and pinch-runner Louisa Scott went to second when Amy Trask reached on an error, went to third when Sara Robb was hit by a pitch to load the bases and scored on Chloe Wigington's sacrifice foy to left field. But Susie Hall struck out to end the inning.

GB didn't go tamely in the seventh, either. Lauren Bromage led off with a walk, Amy Wells was unlucky to be out when her bunt hit her out of the batter's box, but Carling Hare reached on an error. Two on and one out -- but a pop fly and a strikeout ended the threat and left GB with another tough loss. 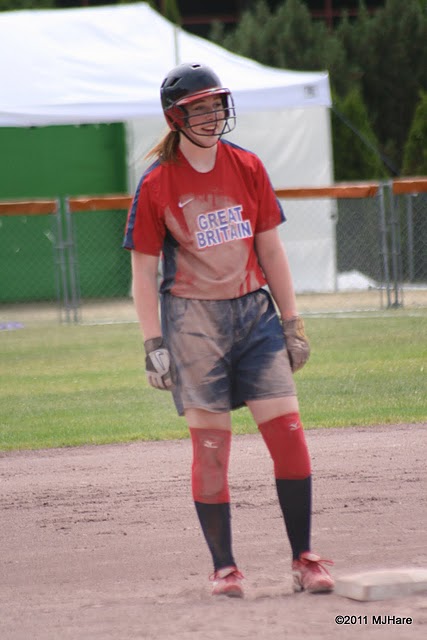 In the game against the Kodiaks, GB had avoided their usual practice of letting in first inning runs. But the curse struck again when they took on Fraser Valley Fusion, who came into the game with a record of 3-1.

This time, only one run scored in the first inning when another speedy leadoff hitter, Danica Kump, turned a line drive to the fence in left-centre field into an inside-the-park home run. The Fusion went on to load the bases against GB starting pitcher Carling Hare with only one out, but Carling did well to choke of the threat by striking out Jessica Ginter and Cassidy St Croix to end the inning.

GB's defense was not as tight as it had been in the morning and the Fusion kept pecking away, scoring one or two runs, but no more, in five of the six innings they batted.

The score was 5-0 to the fusion when GB finally mounted a comeback in the top of the fifth inning. With one out, Lauren Bromage, Vicky Keswick and Nicole Ratel hit consecutive singles. Amy Trask struck out, but Carling Hare singled in two runs and Sara Robb's double to centre field brought in another and left the tying runs on second and third. But the inning ended without further scoring.

And as has happened so often to the GB Juniors in this tournament, as soon as they scored, they give runs right back.

The Fusion had two out and no one on in the bottom of the fifth inning when Carling Hare walked the ninth-place hitter, Paige Rutledge, and that brought up the top of the order and the dangerous Danica Gump. Danica and Megan Shurey singled, and then they began stealing bases, and two runs quickly scored to run the lead back to 7-3.

GB's final run came in the top of the sixth when Saskia Johnston doubled to centre field, moved to third on a groundout and scored on a single by Nicole Ratel. But back came the Fusion with a run of their own in the bottom of the sixth to make the margin 8-4, and that's where it stayed, despite the fact that Sara Robb and Susie Hall had singles in the top of the second inning.

Sadly -- a familiar motif for the GB Juniors -- they were left on base.

On July 14, the GB Juniors will play their final pool game against the top team in the group, the undefeated Surrey Storm 93.

Then they will see what the Consolation Round will bring.

Reports on previous games in this competition can be found in the News section on this website.