When it became clear that Covid would make it very difficult to send a GB Under-13 team to the annual European Massimo Romeo Youth Tournament in Italy this year, the hard decision not to go was taken.  But what then…?  GB Under-13 Team Manager Julie Spittle takes up the story.

Our decision became a little easier when the Massimo Romeo Tournament was subsequently called off by Softball Europe.  But we knew that we couldn’t let another year go by without doing something with the girls we had, since 2021 has so far been the year when the most interest has been shown for trials.

So we decided to hold a mini-tournament at Farnham Park on Monday 9 August for players under 15, as a lot of our athletes had missed out on European competition in 2020 and 2021 and would age out before 2022.

Holly Ireland was able to bring two teams, the NIMPS and the Sluggers, from schools where she has introduced softball in Wales, and by adding the GB squad, we had a three-team competition.

Tournament organisation was gathering speed and we were on track for our first-ever girls’ fastpitch softball tournament at Farnham Park.

Next thing to sort out was umpires and we didn’t have to look very far.  Darrell Pitman and David Morris stepped up to the plate and were willing to help us.

We had a training camp on Sunday 8 August where we did some basic drills with our GB team.  For some it would be their first-ever game the following day.

Monday morning came and with it the rain, but this wasn’t going to dampen our spirits.  The rain soon stopped and the tournament began.

The opening game pitted GB against the NIMPS, the younger of the two teams from Wales.  GB had five players who had previously been to the Massimo Romeo Tournament and seven new players.  Ages ranged from eight to 14 years old.

The final score was 9-3 to GB.  Becky Davis did a great job pitching for the NIMPs in her first time pitching in a proper game.  Megan Rollins pitched for GB and had four strikeouts.

Jack Leslie, Chloe Walker, Rebecca Longman and Ryo Lord for GB and Phoebe Corish, Becky Davis and Safia Sandby Thomas from the NIMPs all got their first hit in a fastpitch game.

MVPs from the game were Ella Smithmier for GB, who played shortstop and batted 1.000 with a home run and a base hit and Tia Devonish, who played a solid game at catcher for the NIMPs and reached base and scored in the second inning. 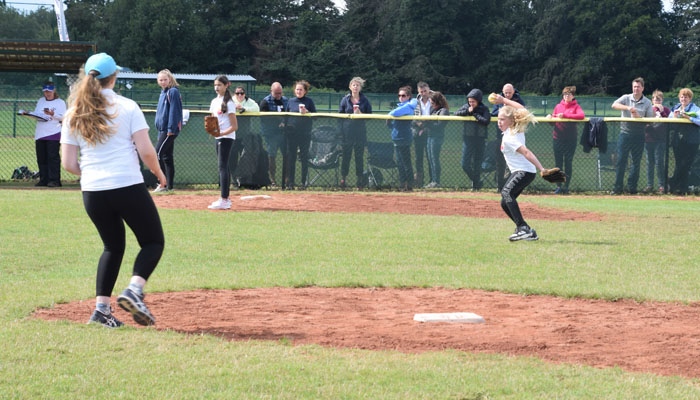 The two Welsh teams met in the second game of the tournament, and the Sluggers lived up to their name, hitting what was pitched at them by Becky Davis.  Ella Holloway, Eira Dorrington, Beth Crapper, Jahdeesha Martin, Jahleesha Martin, Emma Biles, Grace Waters, Robin Klocke and Lowri Smith all got on base through hits in the top of the first inning.

Grace Waters took to the pitching circle for the Sluggers and the NIMPs were also getting bat to ball, but they were unable to score as many as the Sluggers and were retired after two runs came in courtesy of Phoebe Corish and Becky Davis.

The Sluggers scored another five runs in the second inning and the NIMPs replied with four, with Safia Sandby Thomas, Bethan Edwards, Becky Davis and Tyler Henderson all crossing the plate.  Casi Davies was the third out on a tag play at the plate.

MVPs for this game were centre fielder Jahdeesha Martin for the Sluggers and shortstop Bethan Edwards for the NIMPs. 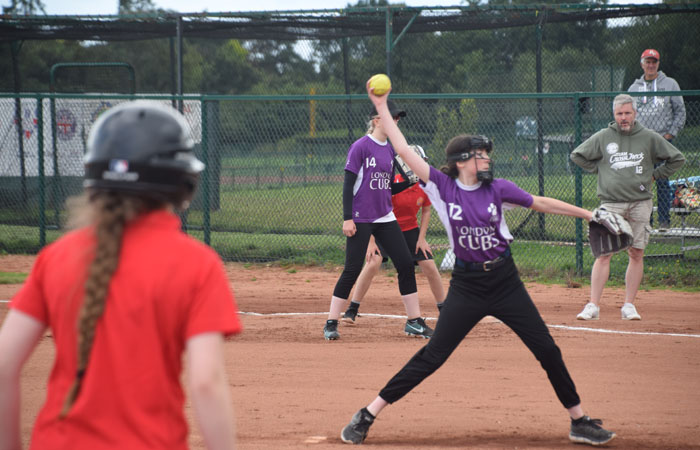 The Sluggers met GB for what turned out to be the final game of the tournament and GB opened by scoring four runs.  In Sapphire Lyon Carroll’s first-ever game she got a hit in her first at-bat.

The Sluggers didn’t score in the bottom of the inning as Amy Morris picked up her first strikeout.

Both teams scored the maximum of five runs in the second inning with Eira Dorrington, Beth Crapper, Jahleesha Martin, Jahdeesha Martin and Emma Biles all hitting and scoring for the Sluggers, while Amy Morris, Stella Albrecht, Ella Smithmier, Elise Alexandre and Megan Rollins all scored for GB.

GB scored 13 runs in the final (open) inning, with everyone getting a hit before the side was retired.

The Sluggers replied with four runs, and the final score was 22-9 to GB.

MVPs were Jahleesha Martin for the Sluggers, who batted 1.000 with a three-run home run among her three base hit and GB’s Stella Albrecht for solid defense at shortstop before coming in to pitch for the last inning.

The sky was getting darker and we were unable to complete the next game before the heavens opened, unfortunately ending the tournament.  So we retired to the clubhouse for presentations.

Bethan Edwards from the NIMPs, who played a solid shortstop, was the tournament MVP.

Becky Davis from the NIMPs was voted the Most Improved Player.  It was her first time pitching, and as her confidence grew throughout the day, her pitching became more consistent.

Amy Morris from GB claimed the Best Pitcher award.  Amy walked only two batters over the course of the day, had a strikeout and showed strength and consistency in the circle.

Parents and players alike enjoyed the tournament and although the weather was a bit damp, spirits weren’t.  It was a day with plenty of learning opportunities and good coaching. 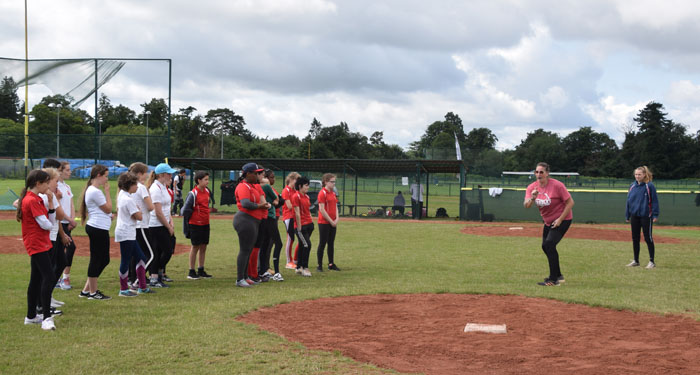 A very big thank you to:

The Home Plate clubhouse for keeping us supplied with drinks and food.

Pete for sorting out the fields.

Darrell Pitman and David Morris for being our fantastic umpires, always understanding and patient and helping the players on the field when they needed it.

All the parents for their support and for getting the girls to the tournament.

Sophie Spittle for being our photographer and capturing this day for us.

All the wonderful coaches -- Jodie Rushin, Nadya Pavlova, Elysee Enness Laporte, Holly Ireland, Alyson Spinas-Valainis and Megan Longman -- for getting the players onto the field and helping them on their journey to reach their potential.

Lastly, to all the players.  Well done, keep up the good work and we look forward to seeing you all on the diamond again soon. 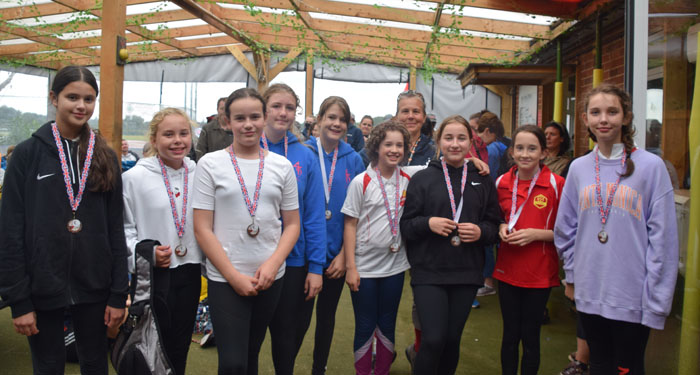 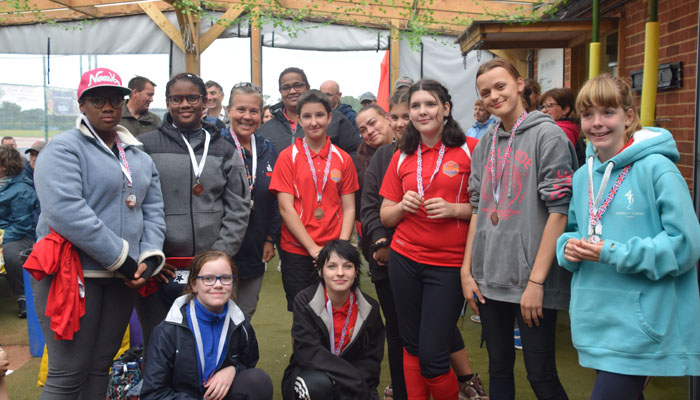 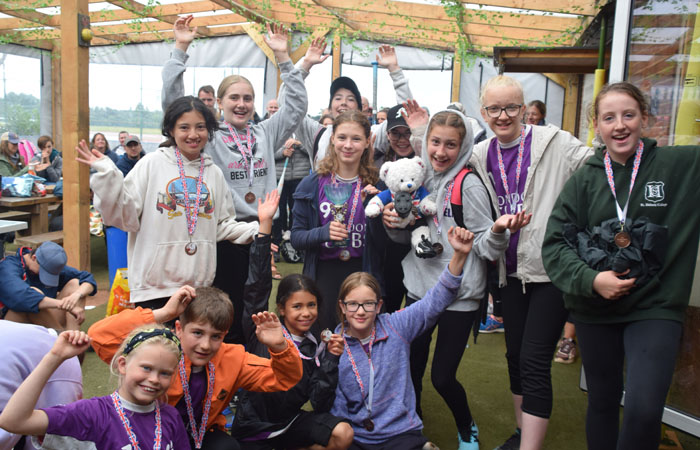