Fakenham fastpitch girls end their season with a doubleheader split

The Fakenham Girls' Fastpitch Team played their final games of a successful season on Saturday, May 21 when they travelled to RAF Alconbury for a doubleheader against the host team and RAF Lakenheath. 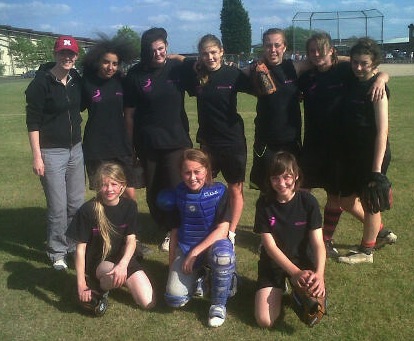 The first game, against the Lancers from RAF Lakenheath, was a real struggle. Opening pitchers Deanna Taylor and Flo House both struggled with location. Each pitched one inning and each conceded six runs, and for the first time this season self-doubt found its way into the Fakenham dugout.

A third pitching change started the recovery, with Chantelle Baker swapping windmill for slingshot and instantly throwing strikes and getting outs. The Lancers certainly made more contact against Chantelle, but solid defence by Fakenham prevented any further runs.

As confidence increased, so Fakenham started to hit the ball themselves, eventually scoring eight runs before time ran out. So the game ended in a 12 - 8 loss, but with plenty of lessons learned about the power of positive thinking!

This new attitude was taken straight into action in the game against Alconbury, as the Fakenham offence pounded the hosts.

Home runs by Chantelle Baker and Shelby Murphy demonstrated the batting power in the team as they went through the order twice in a single inning.

On defence, Fakenham was just as strong. Solid, basic pitching backed up by committed defence all but shut down the hosts, who were relieved when the game was finally brought to a halt with Fakenham running out 19-5 winners.