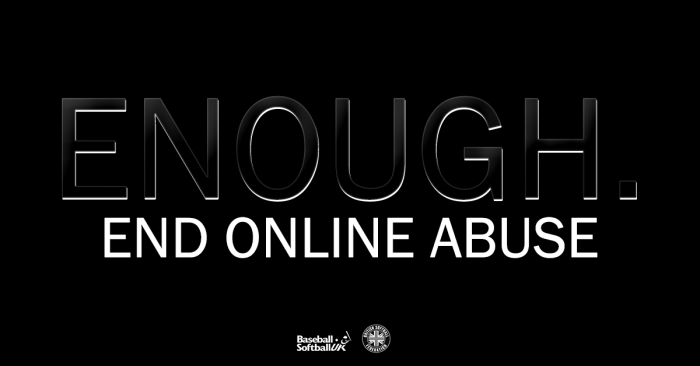 BaseballSoftballUK (BSUK), the national development agency for baseball and softball in the United Kingdom, and the British Softball Federation (BSF), the National Governing Body for softball, will join the charity Kick it Out and football organisations across the country in boycotting all social media this weekend to protest racist abuse and discrimination online.

The four-day boycott, supported by the Football Association, the Premier League, the FA Women's Super League and other sports will take place from 15.00 BST on Friday 30 April until 23.59 BST on Monday 3 May 2021.

Major League Baseball held its annual celebration of Jackie Robinson last week, commemorating the player who became the first Black man to break the colour barrier in 1947 by playing for a Major League team. Across baseball and around the world, countless stories were shared about Jackie Robinson’s impact and what integration of the game has meant.  Unfortunately, this celebration occurred against the backdrop of continued online player abuse in football here in the UK.

This is why BSUK and the BSF have taken the decision to support and stand in solidarity with athletes and members of the UK sporting community who have been on the receiving end of racist, discriminatory, and other forms of abuse online.

As both BaseballSoftballUK and the British Softball Federation are small entities, boycotting social media will limit our ability to communicate and promote our sports.  Simply put, our organisations need social media more than the big tech companies need us.  However, both BSUK and the BSF strongly believe that the level of online abuse has reached the point where action is required.

“The continued tolerance of racial abuse and discrimination on social media platforms is unacceptable,” said BSUK CEO John Boyd. “While we are a small part of this larger movement, we hope that the social media companies hear this message loud and clear: the time for action is now.”

BSF President Ieuan Gale said: “The BSF is proud to support this initiative and hopes that the social media companies will take notice this weekend. Racial abuse and discrimination are not acceptable in softball or any other sport, online or in society.”

Baseball and softball clubs and leagues across the UK are encouraged to join this weekend’s boycott and resources will be shared on both BSUK and the BSF’s social media prior to the boycott taking effect.  To access these resources, contact BSUK Public Relations Officer & Sports Broadcaster Chris Knoblock by email or phone 07376-297751.