Most slowpitch softball leagues around the country finished their season in August, but below are reports from two BSF leagues where the action continued into September. The Roundabout Rhinos won their first Milton Keynes Softball League title with a strong performance in an 18-10 September win over the Willow Lakers.

A good crowd was in attendance to see the two teams enter the field accompanied by a spectacular smoke display (which cleared just in time for the lead-off batter to see the first pitch!).

Excellent hitting from Vickie Robson, Carl Billson and Steve Lamb ensured the Rhinos charged to a 4-0 lead -- one they were to hold for the rest of the game.  The Lakers responded with Paul Severn and Lauren Shkurko getting on base, but a double play put the brakes on the comeback.

Solid pitching from Adam Bee kept the Lakers in touch for a while and a superb low diving catch by Richie Murray raised spirits, along with a couple of excellent outfield catches by left fielder Katie O'Connor.

However, the Rhinos responded with some great fielding of their own, with Steve Lamb diving full length for an outstanding sliding outfield grab.

The Lakers continued to fight hard, reducing the gap to 8-4 by the end of the fourth inning as rookie Hannah Priestley returned from injury with an RBI.  But that was as good as it got for the Lakers.

Trailing 18-8 in the bottom of the seventh inning, a home run from Richie Murray reduced the arrears, but a strikeout wrapped things up for the Rhinos.

The quality of the Rhinos’ hitting proved the difference throughout, with Carl Billson leading the way with two ground-rule doubles, coupled with consistent hitting from Vickie Robson and Steve Lamb, who went on to be named MVPs.  Vickie had three hits and Steve batted 1.000 with a home run and six RBIs.

So the champagne corks were popped and the Rhinos celebrated their first title, becoming the third team to win the MKSL -- although an interloper managed to get in on the team photo! For the Lakers, it marked the end of another fine season where the topped the league table once again.

Huge thanks go to Jodie Bull and Jon Reynolds for setting up the diamond, Hedley Bevan for the commentary and pyrotechnics and Liz Knight for travelling from London to umpire.

Attention then turned to the Codebreakers Cup, with several MKSL players and teams taking part -- and to our 2021 Awards Night.

Pyros continued where they left off in the first half of the season, winning the Summer League by going 6-0 to win Division One.

Sheriffs (4-2) were runners-up and Brewers came third (2-4), although both wins were the result of forfeits by the Misfits, who finished bottom (0-6).

In Division Two, the University of Nottingham Arrows had dropped out after the first half when their academic year ended after winning their first divisional title in a number of years in the Spring League.

However, with a number of students remaining in Nottingham over the summer months, they joined forces with the Pyros to create the Pyromaniacs and started where they had left off in the Summer League, racing into a 4-1 lead at the top of the division.

Meanwhile, the Leicester Royals (2-3) went into the final weekend of fixtures with a mathematical, if improbable, chance of winning the division, along with the Redbacks (4-3), who were still to play the Pyromaniacs later in the week.

The Royals then played three games in a row, against the Tigers, Pyromaniacs and then the Tigers again.  Despite the heat and playing for five straight hours, the Royals dominated all three games, winning the hat-trick of fixtures.  This was even more remarkable given a nasty ankle injury to Sophie Spittle that left them playing more than half of the last game with only nine players.

With the Pyromaniacs having lost both their games to leave them at 4-3, the Royals had leapfrogged to the top of the division on 5-3!

The Royals celebrated their final victory of the day but still hadn’t really looked at the league standings.  Pyromaniacs still had a game to play against the Redbacks and unless the game finished in a tie, then one of the sides would join Royals on a 5-3 record.  But would that be enough to take either of them into first position at the Royals’ expense?

Royals' players started checking the results of previous games to see what would happen if they did end up tied with either of those two sides – and found that by virtue of having beaten the Redbacks in both their games, Royals couldn’t be overtaken by them.  And though tied on head-to-head results against the Pyromaniacs, the Royals totted up the scores and found that they had only conceded 31 runs in those two games, while the Pyromaniacs had conceded 44.

Remarkably, Royals had started the day third in the table but by the end they were top and divisional champions!

And in that final Division 2 game, the Redbacks beat the Pyromaniacs 22-20 to take the runner-up spot. 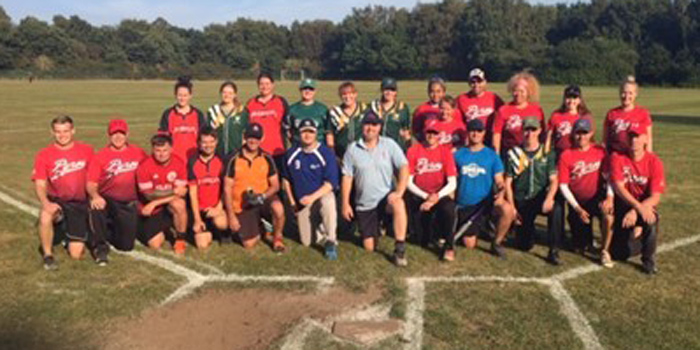 For the fourth year running, on Sunday 26 September at Bestwood, the EMSL hosted what it’s probably safe to say is now an annual event: the All-Stars v Division One Champions game.

This is potentially the final year that Bestwood will host softball due to redevelopment of the site, so it was fitting that the Pyros, who have their home ground at Bestwood, should be the Division One champions and thus get to take on the league’s All-Star Select Team.

The Pyros, as the away side, made the early running, scoring 12 unanswered runs, and led by 12-0 going into the bottom of the fourth inning.  At that point, the the All-Stars suddenly found their bats and scored eight runs to peg the Pyros back.

However, eight was clearly the day’s lucky number as the Pyros smashed eight runs of their own in the top of the fifth inning before the All Stars repeated that feat, and suddenly the score was just 20-16 to the Pyros with two innings to play.

Pyros edged further ahead over those last two innings to lead 25-17 going into the bottom of the seventh and leaving the All Stars needing another eight runs to take the game to extra innings, but unfortunately it wasn’t to be.  The All-Stars did manage to get one more run, but the Pyros’ defense held out to take the game 25-18. 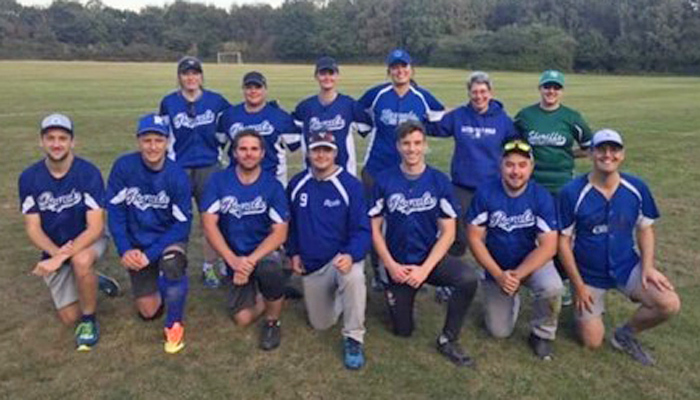 After the All-Star game came the Division Two playoff game between the University of Nottingham Arrows and the Leicester Royals to decide who would represent the EMSL at the 2022 BSF League National Championships.

Coming into the match confident on the back of a hard-fought tournament win the previous day at the Codebreakers Cup, the Royals’ offense and defense proved to be a touch too strong for the University team.

The Royals took an early 8-3 lead over the first two innings after the Arrows chose to take the home team advantage.

The Arrows fought back hard, however, and brought the score to 8-7 at the end of the third inning, inducing a bit of worry on the Royals’ side of the field.  But after three shut-out innings for the Arrows while the Royals were scoring another five runs, the score was 13-7 to the Royals going into the final inning.

In the top of the seventh the Royals managed to add one more run, leaving the University team requiring eight runs to take the win.  Sadly for the Arrows, this was a task too far, with the final score coming in at 14-9 to the Leicester Royals.

A huge well done to everyone: it was a great game and we saw strong displays from both teams throughout.  Best of luck to the Leicester Royals when they represent the EMSL at the BSF League Nationals in August 2022.