Most slowpitch softball leagues around the country either finished their season last month or set up some exciting final games for September.  Below are reports from a number of BSF leagues on action that took place in August.

A combination of Covid isolations, a certain football match on TV and a thunderstorm meant that Manchester's season had to be extended by two weeks, well into the September gloom.

All but one title/promotion/relegation issue was decided in the first week of our version of the Fall Classic.

Top of the list is the first new name on the Division 1 trophy since 1999: the 20-year three-team hegemony was finally broken by Thunder, who beat the Lions in an initially tight title decider (3-2 after four innings) with a display of power hitting and tight defense.  Second place is still to be decided at the time of writing.

Relegated from Division 1 are the Meerkats, who have been up or down in alternating years for, it seems, forever.  And sadly, they were joined by the Jammy Dodgers, who have been in the top flight almost since Day 1 (1997 to be exact) and have struggled all season to find enough players.

Division 2 champions are the Sefton Sharks, whose weekly 80-mile round trip along the M62 has finally paid off.  They will be joined in Division 1 next year by either Speeders or Thunder II depending on the final round of games.

Relegated from Division 2 are the Bats and Hackers, two of our four remaining founder members, who have had an amusing war of banter in our weekly Bases Loaded magazine as to whether they constitute the donkey sanctuary of the league or are aging thoroughbreds.

The Division 3 title was won in thrilling fashion on the final day of the season as the two leading teams faced off with identical 14-1 records.  Los Bandidos beat the Tigers to win the title with an athletic single-handed walk-off double play.

Relegated to Division 4 are the Stingers and the Colt 45s, though one or both of them may get a reprieve if Division 3 is expanded from the current six to eight teams.  Division 4 currently has eight teams after two new teams joined mid-season, with one more team set to return after missing this season due to Covid fears.

The Division 4 trophy, like its Division 2 equivalent, has found its way to Merseyside, having been won by the Southport Seagulls in their first season in the MSL.  Thunder IV were also promoted, making it a successful year for three of the four Club Thunder teams.

Manchester's 31 teams have enthusiastically embraced the return to play, and, though the season has had its trials and tribulations, will be looking forward to returning to normality in April 2022 to celebrate our 30th year.

It was a close race for the two top teams in the Premier League this season, and in the end they were only separated by a single game.  The Dalmeny Dodgers went undefeated in the second half of the season yet couldn’t overturn the Souls’ great start and overall winning run. 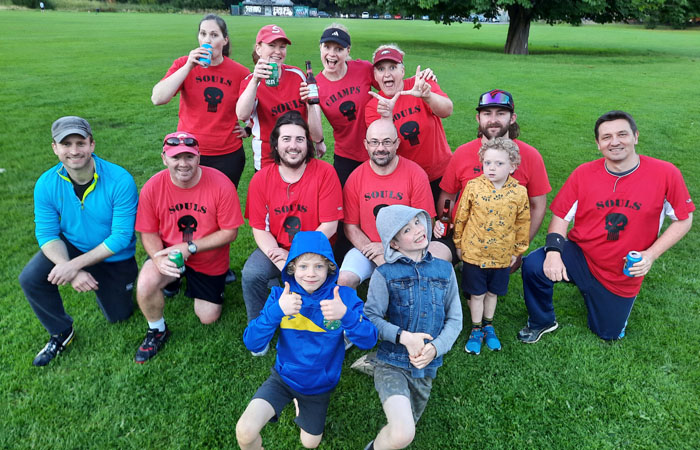 Both teams matched each other on offense, with just over 200 runs scored, but the Souls’ defense conceded just 34 runs compared to 101 for the Dodgers, showing how strong the Souls have been over the shortened 10-game season.  Both teams will now be desperate for their head-to-head fixtures in the 2022 season. 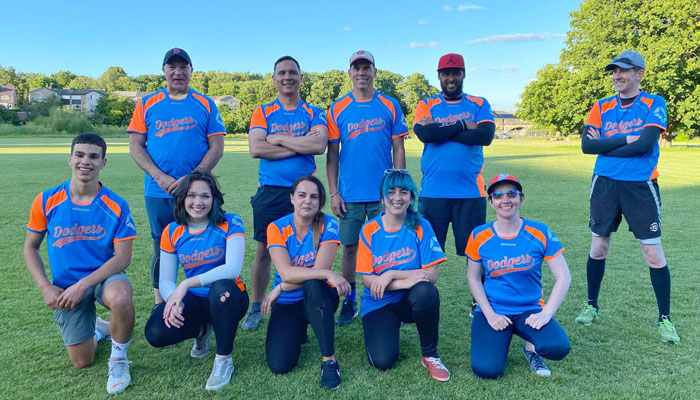 Middle of the table was decided on the final nights of the final week, with Demons securing third place and newcomers Bolts taking fourth.

Haar Hitters pipped the pre-season favourites Dohnuts to take the Division 1 title, with their head-to- head meeting proving the difference.  For a team that almost folded, they hit recruitment hard and made 2021 a season to remember.  Promotion to the Premier League awaits.

It’s been a bit of a merry go round for the other three teams in Division 1, all of whom have occupied third place or higher for a couple weeks.  But in the end Burns Batters secured third place.

The Premier Cup was devised as a way to help the Premier League teams get a few more games this season.  Souls beat Storks 25-10 in one semi-final and the Dalmeny Dodgers beat the Demons by 25-11 in the other.

This set up a final everyone wanted to see and that even brought a few spectators out on the night.  Meeting for the third time this season, both teams were keen to secure victory and the silverware, but in a very close game the Dodgers couldn’t stop the Souls edging away to a 16-6 winning scoreline. 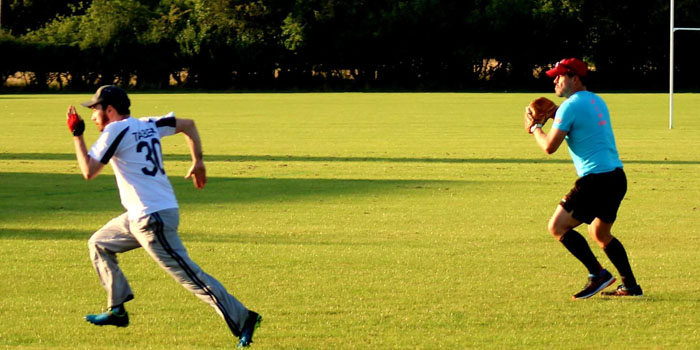 After a year of lockdown and no organised softball, we didn't quite know what to expect for 2021.

But through the hard work of our development and recruitment team led by Jen Edis, we had a record number of new players this year, and the final swing of the bat on 5 August drew the season to a close with a renewed sense of promise.  Not only had we retained the vast majority of those new players, but we gained even more players throughout the season.

Thanks go to all the seasoned veterans who welcomed the new players with open arms. The league plans to continue its recruitment and training over the coming months in preparation for the new season in the spring.

So who was crowned Oxford Softball League champions?

The reigning champions, Spirits, retained the title after a hard-fought battle with the Angels and Rebels.  With one loss each, the three teams ended up tied for first and the championship was decided by run difference.

The Oddsox came fourth, followed by the Knights, Beavers, Mavericks and Tigers respectively.

For the rest of August, the teams all came together for friendly mixed matches until daylight ran out. 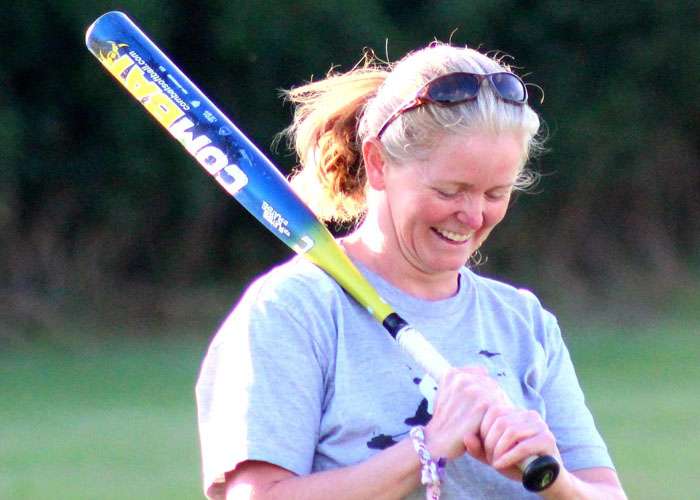 The league’s post-season Awards Night will take place on 17 September where the league MVPs, batting champions, Rookies of the Year and other awards will be announced.  And we're counting down the days until the 2022 season!

It was a dramatic last week in Bristol softball. 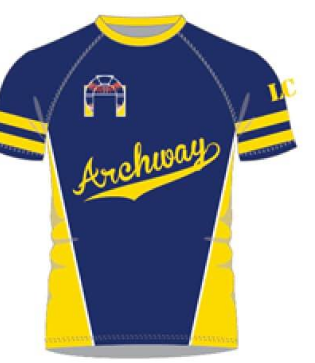 Despite this season being declared “friendly”, with no promotion and relegation, the top teams in each division still wanted the glory of finishing first and that went to the very last hit of the very last game.

In Division 2, two teams -- Grandslammers and Victorious Secrets – were in the hunt.  Grandslammers, who just needed to win their final game, played the much-improved and youthful Flycatchers, lying in third position.  Grandslammers trailed throughout the game and were 7-6 down going into the bottom of the seventh inning before scoring three runs to win the game and the division with a 9-3 record.

In Division 1, there was a three way tie involving Archway Thunder, the Jets and the Sliders, all on 9-3.  And all three teams were tied on head-to-head and even on runs conceded in games between them.  But a quick and thorough bit of research into league rules resulted in Archway Thunder winning on runs conceded over the season.

Congratulations to Archway School, their coach Mark Saunders and their teacher, organiser and home run star Lewis Chapman on their unique double.

The Bristol Wreck tournament took place on the weekend of 14-15 August at Somerdale Pavilion.

It was another big day for Bristol Softball, with 24 teams, six fenced pitches, wonderfully well-maintained grass and a large bar area serving food and beer.

On a memorable weekend, in true Wreck tradition, both finalists played all day Sunday in fancy dress, with London Raiders looking marvellous as Alice in Wonderland.  If you haven’t seen the video yet, go to the Bristol Wreck Tournament Facebook group for the best pre-final warm-up ever seen.

Despite their great fancy dress, the Raiders were beaten by Second Base Invaders (also in fancy dress), in an odd game that was 4-4 after 7 innings but ended 11-10.

Huge credit must go to Jo Newton and the army of volunteers that pitched in to put up and take down fences, the 17 people who volunteered to umpire games (as well as playing) and the staff at Somerdale Pavilion who worked hard to keep the beer and food coming all weekend.

For the record, the other results were: