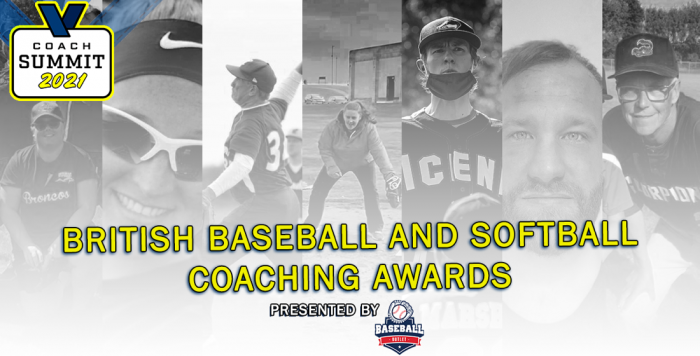 The British Baseball and Softball Coaching Awards presented by Baseball Outlet were announced last week as part of the lead up to BaseballSoftballUK’s Coach Summit 2021. Seven prestigious awards were revealed on BSUK’s social media ahead of the first virtual Coach Summit session on 30 January, with each award winner taking home a gift card from Baseball Outlet to mark their achievement.

The Awards were as follows:

SOFTBALL YOUTH COACH OF THE YEAR

Given to an outstanding contributor to coaching young people in softball in Great Britain in 2020.

The shortlist was Kim Roberts, Horsham Broncos Softball Club; Hollie Ireland, RBI Wales; and the staff of the U15 GB Women’s Fastpitch Team

The winner was Kim Roberts

Kim Roberts has been a stalwart at Horsham Broncos Softball Club, having been involved for the past four years and as head coach for the last two. After completing her Level 2 Coaching Certificate with BSUK, Kim has delivered weekly coaching sessions at Millais School in Horsham for girls to help grow the game. During the pandemic, Kim recorded and distributed a series of half-hour training videos for her players, enabling them to continue softball activity at home.

SOFTBALL ADULT COACH OF THE YEAR

Given to an outstanding contributor to adult softball coaching in Great Britain in 2020.

The winner was Whitney Hollis

Following the cancellation of the London Softball League’s season due to COVID-19, Whitney sprang into action, organising online weekly training and a continuation of the LSL 101 programme in a modified format. Her engaging, fun, and informative style kept attendance high at the online sessions, and eventually COVID secure training outdoors. Whitney’s dedication and drive kept the London Softball League strong and prepared for the return of game action.

BASEBALL ADULT COACH OF THE YEAR

Given to an outstanding contributor to adult baseball coaching in Great Britain in 2020.

The winner was Greg Gillette

Greg has been a stalwart within the London Mets organisation, working across multiple teams. However, the London Mustangs have been the primary beneficiary of his great work. Working with both adult and youth players, Greg has coached the Mustangs squad since their inception in 2019, moulding them into a competitive club in just their second year. While doing this, he also ran summer programmes and helped with field work. Every nomination BSUK received for Greg spoke about his dedication and commitment to the sport of baseball.

BASEBALL YOUTH COACH OF THE YEAR

Given to an outstanding contributor to coaching young people in baseball in Great Britain in 2020.

The winner was Casey Mackenzie

Casey has dedicated more than her fair share of time to the growth of the Aberdeen Baseball programme, especially at the Youth level. She is an engaging, magnetic personality that youth players gravitate to. Casey is also the youth coordinator for Baseball Scotland, growing not only her club in Aberdeen but working to improve participation everywhere north of the border. She constantly come up with new ways to keep young players active and even arranged for gifts this past Christmas season so that her players were recognized. Casey has been instrumental to the success of Aberdeen and Baseball Scotland’s Youth programmes.

YOUNG COACH OF THE YEAR

Given to an outstanding young coach under the age of 25 who has contributed to baseball or softball coaching in Great Britain in 2020.

The winner was Andreas Fopp

Andreas has been a force in British Baseball since his arrival in the UK in 2014. Despite his age, Andreas has dedicated seven years to the improvement of the UEA Blue Sox and Norwich Iceni, with his technical and deliberate coaching style receiving rave reviews. During the pandemic, Andreas took his coaching online, launching a YouTube channel with featured coaching tutorials, and has also done great work bringing awareness to mental health in sports through his Athlete’s Voice platform. Along with his work in baseball, Andreas helped introduce softball to several schools in the Norfolk area, and has been pursuing a Physical Education degree to improve his coaching ability even further.

VOLUNTEER OF THE YEAR

This award is for a volunteer in a non-coaching role who has given up a substantial amount of time to support their local club, team or league and who has made a significant impact on the development of our sports.

The winner was Al Binns

Al Binns was instrumental in the creation of the Newcastle Nighthawks’ new diamond – from designing the site, to seeking planning permission, Al did it all. His effort and dedication led to Newcastle both breaking ground and completing their new pitch in less than a year – and during a global pandemic. Any way you look at it, it is impressive! Building one field was not enough though, as Al has now moved on to assist Wolverhampton and Northants in their field development plans. His efforts are literally transforming the baseball landscape in the UK.

This award is for the individual who best personifies what it means to be a baseball or softball coach over a long period of time: someone who understands their sport and can use the lessons learned on the pitch to motivate and engage others. They have probably played a great number of roles, and without their services to coaching, your club, your league or perhaps even your national team would not be the same.

The winner was Barry Marshall

Barry Marshall was a second-generation British Baseball player, but he was more than that – his impact on the game of baseball in the UK is almost immeasurable. Father of Gavin Marshall, the first GB trained player to sign a professional contract in the US, Barry played for the GB National team in the 1971 European Championships, and then again at the same event in 1984. Barry’s coaching work was vital to the rise of the GB junior programme, as he and Mike Harrold became the first coaches for the team in 1993, leading a young team including his son Gavin and future BSUK CEO John Boyd to victory in Barcelona. Barry was an active coach in Hull throughout his adult life, working with the Scorpions to help grow their footprint in the local area as well as growing the squad through grassroots outreach at schools and youth programmes. Sadly, Barry passed away in 2020 after a long battle with cancer, a devastating loss for the entire British Baseball community. BaseballSoftballUK is proud to honour him today with the Services to Coaching Award 2021.

Reflecting on the awards, BaseballSoftballUK’s Head of Development Chris Rawlings was thrilled by the calibre of the nominations, saying, “Despite the COVID-19 pandemic, the nominations we received for this year’s Coaching Awards were as strong as they’ve ever been. Reading through each nomination, I was struck by the inventiveness and dedication of those coaching, and was thrilled to see how many had gone above and beyond the call of duty. While these seven award winners are certainly deserving of the honour, the entire baseball and softball coaching community deserves recognition for their commitment and work this past year, and their hard work over the past 12 months will be vital once the sports return to play!”

The Coach Summit 2021 continue this week and throughout February and March! For dates, click here and for tickets, click here.