Busy week for softball in Fakenham

The last week of April was a busy time for the extensive and growing softball programme based at Fakenham High School in Norfolk. 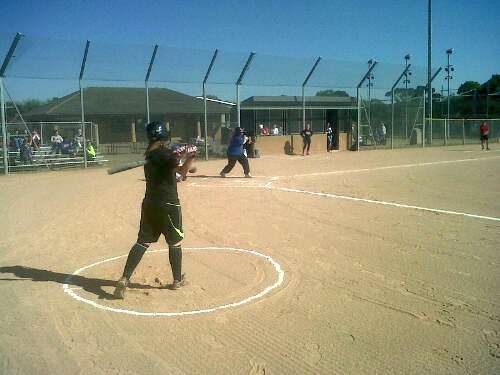 On Wednesday, April 27, the Fakenham Girls' Fastpitch Team travelled to RAF Lakenheath to take on Lakenheath's high school team, after a winter that focused on improving pitching and catching skills. And the hard work clearly paid off, as Fakenham drubbed their American hosts by a score of 27-5.

Fakenham opened the batting and punished the home pitching with a series of big hits as the team batted right through the order.

Then, in the bottom of the first inning, GB Under-16 pitcher Amie Hutchinson was straight into the swing of things and, backed up by a dominant infield, retired Lakenheath for a solitary run. Fakenham never looked back and continued to pile on the runs for the rest of the game.

The winners will return to Lakenheath on May 4 for the second game in the series.

The next night, April 28, over 80 softball enthusiasts turned out at Fakenham High School for the opening evening of Fakenham's slowpitch league, with activity on three diamonds.

The Falcons had a comfortable 20-9 win over new team Sons of Pitches, but the Pitches showed plenty of potential and will definitely improve. In the other game, Norwich Ninjas came from behind to record a 10-7 win against the Wolves. Meanwhile, The Pony used its free week to complete a full squad practice session on Diamond 3.

Fakenham Softball's Mark House said: "After just one week, it's clear that this season's competition is going to be a very tight one indeed!"